On my Wishlist is hosted by Book Chick City a weekly meme where you list a few books off of your wishlist so that others might want to add them to their list if they like the sound of them.

Here are a few of mine:

Alyss Heart, heir to the Wonderland throne, is forced to flee when her vicious aunt Redd murders her parents, the King and Queen of Hearts. She escapes through the Pool of Tears to Victorian London, but she finds she has no way home. Adopted by the Liddells, who christen her Alice Liddell and disapprove of her wild stories about Wonderland, Alyss begs Charles Dodgson to tell her real story. Even though he writes Alice’s Adventures in Wonderland, she knows no one believes her. Years go by, with Alice repressing her memories. Then royal bodyguard Hatter Madigan, determined to start a war for Wonderland’s throne, crashes her wedding. Beddor offers some intriguing reimaginings of Dodgson’s concepts (such as looking-glass travel) and characters (the cat is an assassin with nine lives), but his transformation of Wonderland’s lunacy into a workable world sometimes leads to stilted exposition on history, geography, and government. Even so, his attention has, happily, put Wonderland back on the map again. 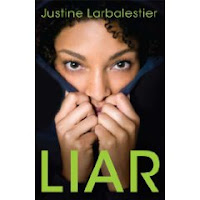 Micah will freely admit that she’s a compulsive liar, but that may be the one honest thing she’ll ever tell you. Over the years she’s duped her classmates, her teachers, and even her parents, and she’s always managed to stay one step ahead of her lies. That is, until her boyfriend dies under brutal circumstances and her dishonesty begins to catch up with her. But is it possible to tell the truth when lying comes as naturally as breathing? Taking readers deep into the psyche of a young woman who will say just about anything to convince them—and herself—that she’s finally come clean, Liar is a bone-chilling thriller that will have readers see-sawing between truths and lies right up to the end. Honestly.

What are you wishing for?

4 responses to “Wish list Wednesday! What book are you wishing for?”