Buy on Amazon
Goodreads
Also in this series: Siege and Storm

Surrounded by enemies, the once-great nation of Ravka has been torn in two by the Shadow Fold, a swath of near impenetrable darkness crawling with monsters who feast on human flesh. Now its fate may rest on the shoulders of one lonely refugee.
Alina Starkov has never been good at anything. But when her regiment is attacked on the Fold and her best friend is brutally injured, Alina reveals a dormant power that saves his life—a power that could be the key to setting her war-ravaged country free. Wrenched from everything she knows, Alina is whisked away to the royal court to be trained as a member of the Grisha, the magical elite led by the mysterious Darkling.
Yet nothing in this lavish world is what it seems. With darkness looming and an entire kingdom depending on her untamed power, Alina will have to confront the secrets of the Grisha . . . and the secrets of her heart.
Shadow and Bone is the first installment in Leigh Bardugo's Grisha Trilogy.

Also by this author: Six of Crows, Crooked Kingdom, Siege and Storm

Okay, so I swore I would never read this series…lol. I really had no desire to do so and I don’t like reading extremely hyped books. Then the Netflix series trailer came out and I got a little curious and I really like trying books first if I can, so I asked Barb what she thought and she wanted to try it too. So we bit the bullet and I must say…I still don’t get the hype! After seeing what I have to say go check out Barbs review at Booker T’s Review.

Oh were to begin. So like I said above I really never wanted to try this one but here I am. First thoughts was that it read very juvenile to me. It was one of the first things I said to Barb when we talked about it. If I didn’t already know that it was a young adult book I would have thought it was middle grade. It felt very simple (but with names and places I couldn’t pronounce) and was very quick to read. Read it in two days which is fast for me.

So it’s about Alina who was an orphan and she had been tested for a magic power but  failed along with her friend Mal as a child. Now she is an apprentice mapmaker and Mal is a soldier (tracker) and they were going through this thing called the Shadow Fold and they got attacked by these winged creatures and things were happening fast and Mal saved her from the creatures and then he got attacked and she saved him but has no idea what she did because all she seen was a light and then she fainted.

When she wakes up she has a gun on her and then gets escorted to see the Darkling and he wants to know what happened and when witnesses tell what happened she doesn’t believe it. They are saying she is a Sun Summoner and now a Grisha and she doesn’t want to be one.

Alina gets moved by the Darkling for her protection to the Little Palace where she is to train and learn how to use her magic but she doesn’t know how and can’t get it to work without someone helping her like an amplifier, something the Darkling can do.

That is about all I can say without spoiling things.

So I can’t say that I was a huge fan of the characters. I thought Alina was kind of whiny (boo hoo I can’t figure out my magic), I know that she just found out she had it but still it was very annoying. If I had to read about how she was scrawny or how her eyes had dark rings around them one more time I might have thrown the book! (No, I wouldn’t it is a library book…lol) 😉 Then when the Darkling wanted to get her an amplifier I was like what…that is cheating she can’t do things on her own so get her something to help her! We find out more about that and why he wanted it later on in the book. Can’t say! 🙂 For a few minutes I thought I was a fan of the Darkling but that changed and  Mal was okay but nothing special. I think the character I liked the most was Genya who was a servant to the Queen though even in the end, my like for her faltered a bit.

The plotline I thought was quite boring for the most part. I mean it read quickly but nothing happened. I know it’s a fantasy and there is world building but I still need something to happen. Reading about day after day of her going to classes to learn her magic or fight got kind of boring. Then when some interesting things happened towards the end there was still parts of it that was rather boring. I would say that the most interesting part was probably the last 15 pages was the most interesting part of the book. Overall, it was just very mediocre.

I know this is a lot of peoples favorites and that is cool but I just didn’t really get the hype. I still want to try the show but mainly to see how close to the book they get. Although I might be willing to try the second book it’s not something I am in the hurry to get too and unless Barb and I decide to tackle the next book together I probably wouldn’t be very tempted.

Review of Rhyme of the Magpie 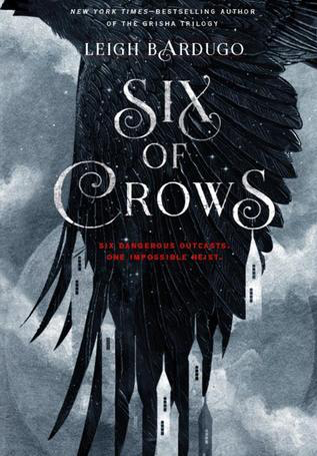