Fourteen-year-old Avery Armisted is athletic, rich, and pretty. Sixteen-year-old Kayla Butts is known as “butt-girl” at school. The two girls were friends as little kids, but that’s ancient history now. So it’s a huge surprise when Avery’s father offers to bring Kayla along on a summer trip to Spain. Avery is horrified that her father thinks he can choose her friends—and make her miss soccer camp. Kayla struggles just to imagine leaving the confines of her small town.
But in Spain, the two uncover a secret their families had hidden from both of them their entire lives. Maybe the girls can put aside their differences and work through it together. Or maybe the lies and betrayal will only push them—and their families—farther apart.

Also by this author: Among the Hidden, The Strangers

So I don’t normally read YA contemporary as in I have never read a YA contemporary. I had heard of this author’s MG series and so I think I thought it might have a bit more something in it than it did. I can’t say I hated it because I didn’t but I also didn’t love it. I struggled with it but at the same time I wanted to see how it ended.I thought it was way to long for a contemporary too at 402 pages.  So if you like YA contemporary I think it might appeal to you just not me. 🙂

Do you remember that story about the country mouse and the city mouse? This story kind of reminded me of something like that…lol.

Fourteen year old Avery (city mouse) is mad at her father not because she gets to go to Spain but because he won’t allow her to take one of her friends. He is making her take a girl who she use to be friends with when they were little but who she doesn’t know now. She has no clue why he wants her to come and she is a spoiled brat about it. That drove me crazy.

Sixteen year old Kayla (country mouse) is not sure why Mr. Armistad wants her to go to Spain with him and Avery as they are virtually strangers. She doesn’t really remember much about Avery but that they use to play together when they were kids. Her mother is excited for her because she will be able to go out and do something so cool. Kayla’s father was injured and bed-ridden and has never been an actual father to her so it’s more like her mother raised her. She spends a lot of time in a nursing home because that is where her father is plus her mother works there. They are pretty poor and so a chance to go to Spain is really a cool thing.

While they are in Spain Avery continues to be a spoiled brat about things but Kayla just sort of does her own thing. Avery’s father signs both Avery and Kayla up for immersion spanish classes but Avery doesn’t go for like a week or so but Kayla does. She enjoys her time in the class and has made some friends.

There are so many difference between the two characters but then something happens that really bothers both of them. It doesn’t really hinder Kayla as much as Avery and so I couldn’t really get why Kayla was acting so devastated like she was during a good part of the book. I could understand Avery’s whining and things because it was a big reveal to her but at the same time I got a bit tired of it.

As the book goes on you do see some character growth with both of the main characters which is probably why I didn’t hate it. I was glad to see Avery grow up a little and realize the world doesn’t revolve around her. Kayla learns that she can do things on her own and she also finds out what she wants to do with her life and loves Spain.

I am sure this didn’t make a whole lot of since but pretty much Avery had a summer of a lot of broken things and Kayla learns to be herself. I don’t want to say anything else which is why I feel like I rambled, but I do see how this could be a book that those who read YA contemporary could really enjoy, so if you like this kind of thing they you should give it a try. 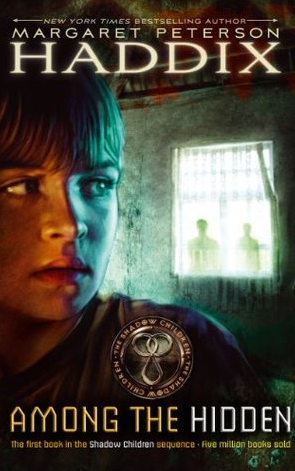 Book Review: Among the Hidden by Margaret Peterson Haddix

12 responses to “Review of The Summer of Broken Things”