Mercenary Kate Daniels must risk all to protect everything she holds dear in this epic, can't-miss entry in the thrilling #1 New York Times bestselling urban-fantasy series.
Kate has come a long way from her origins as a loner taking care of paranormal problems in post-Shift Atlanta. She's made friends and enemies. She's found love and started a family with Curran Lennart, the former Beast Lord. But her magic is too strong for the power players of the world to let her be.
Kate and her father, Roland, currently have an uneasy truce, but when he starts testing her defenses again, she knows that sooner or later a confrontation is inevitable. The Witch Oracle has begun seeing visions of blood, fire, and human bones. And when a mysterious box is delivered to Kate's doorstep, a threat of war from the ancient enemy who nearly destroyed her family, she knows her time is up.
Kate Daniels sees no other choice but to combine forces with the unlikeliest of allies. She knows betrayal is inevitable. She knows she may not survive the coming battle. But she has to try.
For her child.
For Atlanta.
For the world.

Barb and I have reached the finish line with this series!! I can’t believe we are done with Kate Daniels, it is very bittersweet. Go check out her thoughts on the final book @ Booker T’s Farm.

It’s kind of sad to have finished the Kate Daniels series but at the same time I am excited that Barb and I finished this series in a year. Mainly because we also read the 5.5 book that we thought was a novella but it wasn’t and the first book in the Iron Covenant series that went between books 9 and 10 and is a spin off series with the dreaded Hugh! 🙂 So technically we read 12 books for this…lol. Not to shabby.

So because this is book ten I can’t really say a whole lot about it for fear of spoilers, so this might be short.

I really enjoyed the series as a whole and I loved the character growth that happened with a lot of the characters. I thought the author did an amazing job creating a very interesting world that I loved reading about but wouldn’t want to live in. I also liked that it wasn’t all about Kate’s father Roland. I was afraid it was going to just be about what was happening between them but there was a lot of other things happening.

The end kind of leaves me hoping that Julie gets a spin off or is at least maybe in the new Hugh spin off! The author actually is making me like Hugh a little bit!!!! ugh…lol.

Highly recommend you read this series! 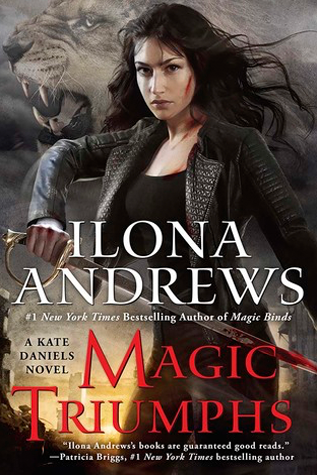 5 responses to “Review of Magic Triumphs ~Two Bloggers One Series”