At the annual Victorian Home and Garden Tour, Lighthouse Cove, California's premier contractor, Shannon Hammer, realizes that the competition is about to turn deadly....
Shannon is in high demand among rival homeowners, who will do anything to win Best in Show. One-upmanship and even espionage break out among neighbors, construction crews, decorators, and landscapers. Thanks to several new hires, Shannon is sure she can handle the extra load--until murder throws a wrench in the works.
The small town's corrupt building inspector is found dead on one of Shannon's jobsites, and soon plenty of suspects are coming out of the woodwork. When another body is discovered, Shannon calls on her team of close friends and devilishly astute thriller writer Mac to help her nail down the details and build a case against the killer before the door shuts on someone else--for good.

Also by this author: Once Upon a Spine, A Wrench in the Works

I really love my job. But I’ve got to admit, some days are better than others.

So I broke my rule with this one and grabbed it anyway because I really wanted to try one and I have seen the movies on Hallmark several times. 😉 So I figured besides a few changes that I might be able to make it through okay without having read book one. I was right things went pretty good. There are some differences but I felt that the main characters flow pretty much the same on paper and in the shows.

In this one it’s about time for the Home and Garden tour and everyone seems to want to have something done to their home so they can win the prize. One of those people is Petsy and man she is totally rude! Shannon would probably back away from taking the job if her father wasn’t friends with Petsy’s husband, who is a really nice man. To make matters worse the town’s building inspector seems to have it out for Shannon and is always trying to find a way to slow down her work. He seems to thrive on it, but then he is found dead and there is a huge list of suspects.

Shannon and her crew could be considered at the top of the list but she really hopes that one of her guys didn’t do it. Shannon also gains a new crew member, Amanda, as they needed another good carpenter since they have been so busy. Shannon and Amanda hit it off really well but she has a secret of her own.

I really like the characters in this series and it was really easy to get wrapped up in everything and never felt like I missed something because I didn’t start at the beginning of the series. I think a lot is because I knew a bit about it from the movie on Hallmark though some things were different. I really like the relationship between Shannon and Mac and Shannon and her crew of workers. It just makes for a great story.

It has a really good mystery too and the author throws you off some and I really wasn’t sure who done it. I had suspicions but at the same time I was still never really sure. I can’t wait to read another one!!!

Review of A Wrench in the Works 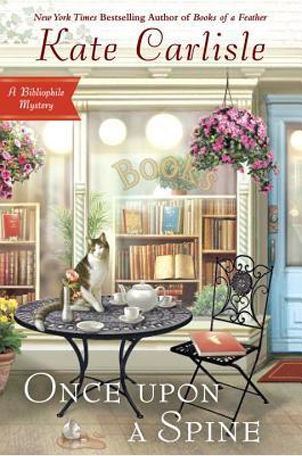 Book Review: Once Upon a Spine by Kate Carlisle

4 responses to “Review of Eaves of Destruction”