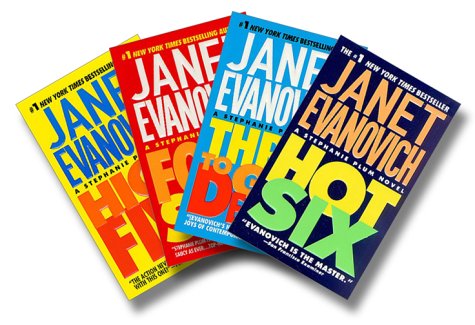 Stephanie Plum is a bounty hunter with attitude. In Stephanie's opinion, toxic waste, rabid drivers, armed schizophrenics, and August heat, humidity, and hydrocarbons are all part of the great adventure of living in Jersey. She's a product of blue-collar Trenton, where houses are attached and narrow, cars are American, windows are clean, and dinner is served at six.

DISCLAIMER: Okay, the plugin I use (the Ultimate Book Blogger) is coded for reviewing a single book, so some of the initial data is a bit odd sounding. Ignore it.

As part of my hunt to find examples of why I adore the first part of this series, I spent a couple days gorging on Stephanie Plum: Three to Get Deadly, Four to Score, High Five, Hot Six, and Seven Up. I do have a chronological listing of the Stephanie Plum books on my website if you’re curious.

Three To Get Deadly

Trenton may be the state capitol of New Jersey, but it’s got a small town mindset, and Stephanie knows everybody from who to call to get the latest dirt to exploring their bank accounts. It’s got just enough sex to keep you interested without going into details.

“If you had a decent sex life, you wouldn’t need to gratify yourself like this,” he said…

“Yeah,” Morelli said. “But sometimes it’s fun to have a partner.”

Then there’s Ranger. Ooh, baby. Wait’ll you read the scene in which Ranger shows up for dinner at the Plum household. He’s in his classy bounty hunter mode, and Grandma:

“Have some ham,” Grandma said to Ranger, passing him the plate. “Are you a Negro?” she asked.

And here it is, one of the main reasons I adore this series. It’s Stephanie’s decision to stop being embarrassed about her family. That “everyone has the right to embarrass themselves with no reflection on anyone else”.

In 1997, Three to Get Deadly won the Macallan Silver Dagger for Fiction, and in 1998, it won the Dilys Award and the Lefty Award.

Evanovich has a way of describing people that will crack you up. In this one, she describes Lula as “a big, black ’53 Packard with a high-gloss chrome grille, oversized headlights, and a growl like a junkyard dog”.

There’s such a casual approach to guns in this and nicely typified by the opening pages.

Lula checked out my clothes. “You need a gun? I don’t see no gun bulges in that spandex.” She hiked up her T-shirt and pulled a Chief’s Special out of her cut-off denim shorts. “You could use mine. Just be careful; it sights high.”

It gets even better when Sally Sweet appears. The hairiest transvestite you’ll ever meet. And a sweetheart of a character, lol.

Part of the fun is Stephanie’s dad. He’s so very tolerant of his mother-in-law and the variety of, ahem, people, Stephanie brings home. And yet he’s the complete picture of a bigot as well as the stereotyped husband who doesn’t hear what’s going on around him and more concerned with the gas Steph uses in that ol’ Buick.

I do adore Steph’s interactions with her hamster.

“Rex still didn’t come out of his can, but I could see the pine shavings moving. I think he was laughing.”

Back to that small town feel when Stephanie uses her persuasive powers to get Carol Zabo to climb off that bridge railing.

“You’re going to look awful when they find you. Think about it — your hair’s gonna be a wreck.”

…”I never thought of that,” she said. “I just had it highlighted, too.”

In 2001, Hot Six won the Puddly Award for Mystery and was nominated for the
Dilys Award.

This is one of those series where you really need to load up on the snack food: fried chicken, donuts, cake — all kinds of cake, ham, and more.

“There was a pineapple upside-down cake a couple miles away at my parents’ house. I checked out the waistband on my Levi’s. No room to spare. Probably I didn’t need the cake.

“I drank the beer and ate some olives. Not bad, but not cake. I blew out a sigh of resignation. I was going to cave. I wanted the cake.”

It’s on-again, off-again with Joe — quite conveniently when Ranger makes his demands known to Stephanie. *Fanning my face on this one…* Stephanie’s perfect sister shows up, and she has her own plans on how to cope with Steve’s running away. Yep, she’s gonna be a lesbian, and it will crack you up as you learn how she intends to go about it.

“She opened her eyes, but didn’t move a muscle for a good thirty seconds. Then she yelled out, ‘A lesbian! Mother of God. Frank, your daughter’s a lesbian.’

My father squinted at Valerie. ‘Is that my tie you’ve got on?'”

I can’t help it. It’s too much fun — even when I get frustrated with how stupid Stephanie can be. Why hasn’t she gotten rid of the beauty products in her purse!?

I know some people don’t care for the series because it’s the same thing over and over again. But that’s part of small town life. It is the same thing repeated, day after day. The excitement comes in the different — and totally crazy — scenarios and characters Evanovich introduces. I adore Grandma and how nutso she is. Mom and Steph’s father crack me up with their intense normalness — even as Mom starts to disintegrate. The Burg’s approach to guns and crime is too funny for words. Lula is another one. She’s got her own realistic take on life based on her upbringing and her former career as a ‘ho. It’s Laurel and Hardy when these two get together. The sexual tension comes from Joe Morelli and Ranger…whoowee…I wouldn’t be able to choose either…