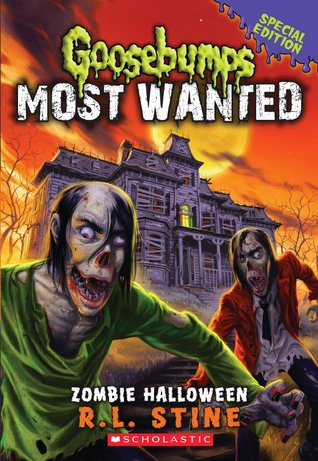 Kenny Manzetti was the new kid in town. His family moved back in to an old house to help take care of his grandfather. Everyone in his new neighborhood is obsessed with zombies--even Grandpa Mo. But then a new family moves in next door and there choice in furniture is...interesting.

Kenny is convinced that there is something strange about the new neighbors but his parents won't listen to him. So Kenny and his friends go in for a closer look. A bad idea on any day but definitely the wrong choice around Halloween. Will Kenny survive long enough to go trick or treating?

Also by this author: Don't Stay Up Late, The Lost Girl (Fear Street Relaunch, #3), You May Now Kill the Bride , Welcome to Dead House, Revenge of the Lawn Gnomes

First in the Goosebumps Most Wanted Special Edition horror series for middle-grade readers. The action takes place in and around their new house in Franklin Village.

I did receive this ARC from the publisher.

My Take
Hey, it’s a melodramatic horror and ghost story, so there’s plenty of fear generated. It’s also Mario and Kenny terrified out of their minds and egged on to dare their fears by siblings and friends. A day of dare and danger that sets the scene for latter-day events, helped by the Mazettis moving into an old and creepy house across from . . . a graveyard. Twice.

I love that Stine brings out the everykid with Mario identifying with Superman and company, ’cause after all, don’t we all dream about being superheroic and able to leap tall buildings, lol. It’s also an excellent example of how mean kids are to each other! I did like Treveor’s excuse for the storage boxes, lol. A little mean and a little scary, which keeps that particular theme on track.

Nah, I don’t buy it, that original Mario is at all to blame for events. I’m puttin’ it on Ivy and Anthony as they were the instigators. Although . . . how can you forget leaving someone behind or leaving a trap door open when there are frightful things behind you?

This story bugged me, as it felt disjointed and not very developed. As if it were created in a rush. And maybe it’s just been too long since I last read a Goosebump . . . who knows? What I do want to know is what happened to Anthony after all this? Why would Mario hang onto the house all this time? Why that ending?

The Story
A gloomy house and frightful friends turn a graveyard fall into a nightmare that only gets worse.

Even years later, a zombie-themed Halloween party for another two, new, siblings on the block sets off more frightening events — including the three new coffins that are moved in next door! At least it brings one loose end to a close!

The Characters
The Mario of 1944
Mario Manzetti is the man of the house, taking care of his younger, obnoxious brother, Anthony, while his mother works two jobs so they can survive while their dad is fighting in the army during World War II. How pathetic is that? That the family of a soldier has to struggle so hard while he’s risking his life for us? The ever-cheerful Ivy is Mario’s new friend.

The “Mario” of today
Kenny Manzetti‘s only worry is beating his friend, Alex Schwartzman, at The Walking Zombies. Tricia is Kenny’s twin sister — and she has a crush on Alex. It’s Grandpa Mo‘s house, and he has had bad dreams about zombies since, well, forever. Mom teaches third grade, and Dad, Sal, is an investment manager.

Trevor is the son of the people who just moved in next door — with three coffins!

The Cover & Title
I suspect that cover has incorporated a lot of artistic license as I don’t think any city would allow someone to live in that wreck of a house, lol. It shows up really well against that blazing sunset with the moon overhead with a couple of tremendously gross zombies rushing at us. It gives me the shivers even as I laugh.

The title is the theme, for it’s a Zombie Halloween party that is supposed to help Kenny and Tricia make new friends. They don’t realize just what kind of friends . . . bwah-ha-ha . . .