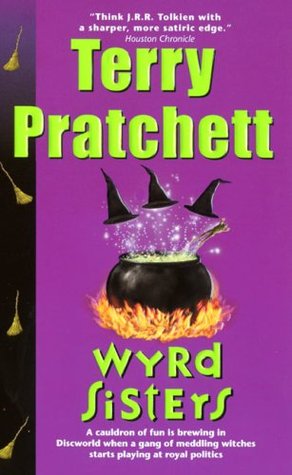 “Only in our dreams are we free.
The rest of the time we need wages.”

You’ll discover how very unsociable the witches are in Wyrd Sisters, and all parodying Hamlet. Sometimes I think I spent more time making Hamlet comparisons than reading! Then Pratchett throws in our own world’s everyday concerns: babysitting, English culture — “Hurry up with that tea, luv. I’m that parched” and “a knees-up” are only a few; a dash of Disney’s Sleeping Beauty — I did enjoy the three “gifts” Tomjon’s “godmothers” give him, lol; a modicum of witches and gingerbread cottages (although I thought it had been Old Granny Whitlow’s); Cinderella; and, Magrat learns the truth about using magic.

This is a key point in learning the truth about the Fool and the kingdom:

“‘A knocking without the door?’ [the Fool] asked suspiciously. ‘This isn’t some kind of Zen, is it?’

Without thinking, [the Fool] said: “Oh a sub-sect of the Turnwise Klatch philosophical system of … ‘

The cook relaxed. ‘Well, OK,’ he said, not entirely satisfied.

The Fool lost the next three hands, just to be on the safe side.”

Granny Weatherwax isn’t too keen on how modern Magrat has done things up. When she was a gel, “we had a lump of wax and a couple of pins and had to be content”. None of this foolery. While Granny is scornful, Nanny Ogg is more forgiving of poor Magrat’s attempts to do things up proper with runes and candles and things. Not like the Fool who hides his smarts beneath his foolery. Although, he’s a thoughtless betrayer as well when he explains to the duke and duchess the power of words.

ROFLMAO, as Pratchett pokes fun at kings and the thoughts that govern their days. At the stiff rules of unions as the Fool recounts his days at school in Ankh-Morpork. At the lengths to which men will go for a woman in their bed, or at least their arms. Nor can I help laughing at the quiet “respect” everyone gives Granny, LMAO.

As a writer, you may be like some truly great examples of metaphors you can laugh your way through in any of Pratchett’s Discworld stories.

“Lightning stabbed at the earth erratically, like an inefficient assassin.”

“His body was standing to attention. Despite all his efforts his stomach stood at ease.”

“A year went past. The days followed one another patiently. Right back at the beginning of the multiverse they had tried all passing at the same time, and it hadn’t worked.”

Oh, lord, when Granny encounters a theatrical play, she takes it much too seriously, and you’ll either pee your pants laughing or cringe with embarrassment. Yep, I did both.

“A kingdom is made up of all sorts of things. Ideas. Loyalties. Memories. It all sort of exists together. And then all these things create some kind of life. Not a body kind of life, more like a living idea.”

Then there’re the twists the witches put on at the end… It was too hysterically funny for words.

Generally, these lone witches don’t get involved in anything, much less royal intrigue. But then there are those times they can’t help it, and it’s divers alarums.

As Granny Weatherwax is about to discover, it’s a lot harder to stir up trouble in the castle than some theatrical types would have you think. Even when you’ve got a few unexpected spells up your sleeve.

Esme “Granny” Weatherwax is the unofficial leader of all the witches. Her fellow witches include the lusty Gytha “Nanny” Ogg (she’s been married three times and has enough children and grandchildren to populate a kingdom) and Magrat Garlick is the junior witch with all sorts of odd thoughts in her head. She reads grimmers! Goodie Whemper maysherestinpeace, a research witch, had been Magrat’s mentor. Greebo is Nanny Ogg’s huge, vicious, one-eyed tom. Lightfoot is the tortoise Magrat insists on keeping.

Tracie, Dreen, Darron, Jason who has the brains of an oxen, our Wane, Shawn is one of the castle guards, the head housekeeper is one of her in-laws, Kev, Trev, Nev, Reet, Sharleen, Shirl brings Nanny breakfast, Karen married an innkeeper in Ankh-Morpork, and Shirl and Daff who help out in the kitchens are some of Nanny Ogg’s children.

Grodley is one of them who puts antimassacres on her chairs. Black Aliss Demurrage had been one of the best.

The theatrical company is…
…run by Olwyn Vitoller whose voice the Creator of the universe would envy. Mrs. Vitoller is the deciding factor in taking in the wee babe, Tom, er, John, er, Tomjon. Hwel is a dwarf who does all the writing for the troupe. Young Willikins specializes in female roles. They’re hoping that young Wimsloe‘s spots will clear up. Brattsley and Gumridge are more apprentice actors. The Dysk is the theater they’ll be building.

Lancre is…
…a country in Discworld where King Verence reigns, but not for long. It’s also where the Ramtop Mountains are, where most of Discworld’s witches and wizards come from, where even the rocks go for a stroll. Hoki and Herne the Hunted are minor gods there. Bad Ass is one of the towns. The mayor of Lancre and its burghers are not happy about the new king. Davis is the butcher. Champett Poldy is a villager who speaks out against the witches while young Nesheley from Inkcap tries to run them down.

Champot was king 1,000 years ago and built the palace. He’ll help Verence get the hang of it. Other ghosts in the castle include the Twins, the Troglodyte Wanderer, a chariot with a screaming woman, and then there’s the kitchens. They’re full of ghosts, the ghosts of stags, bullocks, rabbits, pheasants, partridges, sheep, and pigs, and more…oysters!

Leonal, Duke Felmet is rising in the world, thanks to his behemoth of a cold, cruel wife, Lady Felmet, the brains of the outfit. He’s also washing his hands more often than Lady MacBeth ever did. Bentzen is “captain of the duke’s personal bodyguard [and] as efficient a killer as a psychotic mongoose”.

The Fool is inherited by Felmet. His granddad was a right stickler for adhering to the rules. His mother was a Beldame from over Blackglass way. Teachers at school included the Brother Prankster and Brother Jape.

Of the soldiers, young Roger isn’t allowed fruit and Hron takes joy in his orders. The tax gatherer is not gathering up the “fruit” the duke expects.

Ankh-Morpork is…
…the biggest, most disgusting city on Discworld. The Librarian from Unseen University has a very brief moment. Boggis is a thief with standards. Grabpot Thundergust is a dwarf who owns a cosmetics mill. Leonard of Quirm is a dab hand at designing theatrical machinery.

The Discworld is…
…a flat world carried on the backs of four giant elephants, themselves standing on the back of Great A’Tuin, a star turtle.

The cover has a bright red-violet background with a black edge along the binding side with straw brooms dancing their way down. The author’s name and title are in a bright lime green with info blurbs in white. The graphic is a cartoon image of a cauldron nesting in merrily burning flames, the green goo bubbling away and tossing out sparks that hold three bouncing black witches’ hats aloft.

The title is a take-off from Shakespeare’s Hamlet and the witches’ scene, the Wyrd Sisters, as they toil over their cauldron. 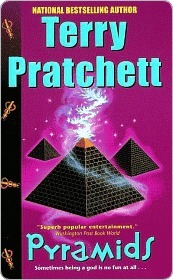 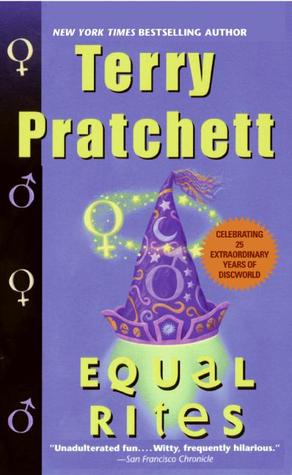