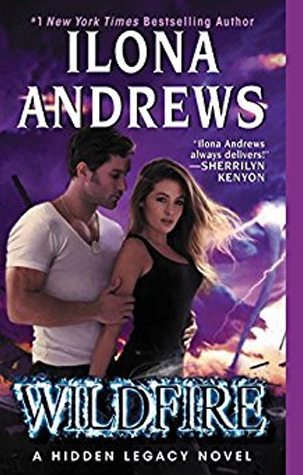 Third in the Hidden Legacy paranormal romance universe and third and last in the Nevada Baylor Trilogy, yep, Catalina’s story is coming up in 2019. Whew. Thought I was gonna suffer permanent withdrawal.

Wildfire is still revolving around Nevada Baylor, an upcoming Prime, and the “Mad” Rogan who loves her.

I can certainly see why Nevada would be fascinated by Rogan, with all that intensity he focuses on her. And you can’t help but adore the Baylors. They stand up for each other, support each other, and just want each other to be happy, even as they snark and battle amongst each other, lol. And Matilda is really enjoying the time she spends amidst a family who reacts.

It certainly is a bonus that Cornelius joined the firm. There is so much he knows that can help her! ‘Cause these Houses are scary. There are too many psychopaths in them! And I agree with Nevada…they’re abominations, and how those Houses don’t see this, I don’t know. I mean, look at Rynda’s mother. Sure, I can see Rynda’s point about her mother, but her actions?!? It did send a shiver down my spine in White Hot, 2, when Andrews revealed Cornelius’ family name.

Brian’s upbringing is what too many parents do to their children — allow them to escape the consequences of their actions. It is never a lesson a child should be allowed to absorb, as they grow up and move into society with that same attitude. And there is no way that others will overlook his bad attitude. Not forever. Catalina has her own contribution to this, and she’s right too.

Then there’s Mom and her attempts to keep the kids under the radar. I can appreciate wanting to keep them safe, but how are they supposed to stay safe if they don’t know how to use their abilities?

Oh, man, oh man, that Kyle. He’s only saying what parents have been saying for about 20 years: “‘Use your words,’ Kyle suggested helpfully.” ROFL.

As for Rynda. Oh. Boy. What a wimp. I do love Nevada’s description of how she reacts in a crisis, and how proud Rynda would be of her “quick” actions, lol. Me? I wanna smack the twit. Although, I guess that Nevada’s way is a better approach, *more laughter*. More of Nevada’s brilliance shines through after that dinner date with Garen. My mind just doesn’t work this way!

I gotta say I’m confused. Their head of House is missing, and Sherwood is actively being obstreperous. Why?

Action-wise? It never stops. There’s the personal action Nevada has with everybody, from love all the way to the kill. Small battles where Leon proves himself, Rogan needs reining in, Grandmother Tremaine’s actions that reveal so much and on up to the large battles…whew! Those battles are scary and over-the-top. Just your typical fight but with all the magic Andrews throws in in this “magical” world she’s created. It is a complex world, and definitely how I could see it develop what with humanity and their greed in the mix.

The majority of the story is first person protagonist point-of-view until the very end when it slips into third person. For Nevada can’t know this, but Andrews wants to make sure we teeter on that cliffhanger!

Four-year-old Kyle hasn’t yet manifested his magic. He’s late, and his parents are worrying. More worries hit the Sherwoods when Brian turns up missing. Terrified and unwilling to help herself, Rynda throws herself on her ex-fiancé, Rogan, much to Nevada’s dismay.

As if that isn’t enough, Victoria knows who Nevada is and is determined to take her and Catalina to keep her own House alive.

It leaves Nevada with a very few choices to protect her family: Let Rogan protect them. Give in to Victoria and never be free again. Or become a House. And protect Arabella.

Nevada Baylor has discovered she’s Prime truthseeker material, an Elenchus, and has declared her House. The employees are the family: two sisters, the almost-eighteen Catalina, a love mage, and fifteen-year-old Arabella; two cousins, Bern, a Magister Examplaria, who sees patterns in code and encryption and is built like he broke people for a living, and sixteen-year-old Leon, who thinks he has no power; Mom, a.k.a., the former-Sergeant Penelope Baylor, is a disabled vet who walks with a limp and whose power revolves around her sniper ability; and, Grandma Frida Afram, who repairs armored vehicles and mobile artillery for the Houses. Romeo is a particular pet, an M551 Sheridan tank. The altruistic James had been their dad while Leon Afram had been their maternal grandad.

The Baylor Investigative Agency is…
…the family legacy, built by her father. She’s been holding the Baylors together and keeping to the family code. Cornelius Harrison, an animal mage, is their new employee; Nari had been his wife before she was murdered (White Hot). Matilda is his darling five-year-old daughter. Talon is his red-tailed chicken hawk. The blue cat creature with the fringe of tentacles is Zeus. Bunny is Matilda’s protective Doberman Pinscher.

House Rogan is…
…led by Major Connor “Mad” Rogan, a.k.a., the Butcher of Merida, the Scourge of Mexico, Huracan, who was changed by his actions as the army’s ultimate weapon in the Belize War. Dr Daniela Arias is House Rogan’s physician. Bug, a still-living swarmer, is the head of surveillance; Napoleon is his protective partly French bulldog. Nguyen Hanh is the head mechanic. Michael Rivera is Rogan’s second-in-command. Melosa is Rogan’s personal aegis; Tom and Li Min will also shield during the battle. Nevada is partnered up with Sergeant Heart. Rodriguez provides the range, and Kurt, an ex-Navy SEAL, knows all about PTSD. Delun and Troy Linman are more security. Sabrian Turner is legal counsel to House Rogan.

Sergeant Teddy is a grizzly bear who had been worked over magically. He’s a pacifist. He got bored with the place he had and wants to hang with Rogan’s mercs. Wait’ll you read the scene with the kids, lol.

Kelly Waller is Rogan’s traitorous cousin, who doesn’t care who she hurts.

House Harrison is…
…Cornelius’ family. Diana, his sister, is the head of the family and a Prime animal mage. And finally taking an interest in her niece.

House Sherwood has…
…the flaky Brian, a Prime herbamagos with fungi, as the head of the family with his genius in science and research. He’s married to Rynda Charles, an empath Prime, Rogan’s former fiancée, and daughter to Olivia Charles from White Hot. Their children are Jessica, an empath, and Kyle. Sherwood BioCore is a pharmaceutical company and the family business. Brian’s older brother, Edward, a Prime herbamagos with fruit trees, holds the company together financially and handles day-to-day operations. Angela is their sister. Joshua had been the Sherwoods’ father. Margaret works for BioCore. Colin is Edward’s new chief of security.

House Tremaine is…
…led by Victoria Tremaine, a hard, vicious truthseeker and the bogeyman feared by all…and the Baylors’ grandmother. She heads TRM Enterprises, and she’s also the last of her House which will die when she does, unless…

House Shaffer is…
…another truthseeker House. Garen Shaffer is the heir to his house and a truthseeker Prime who runs Shaffer Security, the second biggest in the nation. Colleen is his mother. House Lin is the third truthseeker house and heavy into government contracts.

Montgomery International Investigations (MII) is…
…the primary company in House Montgomery, which is led by Augustine Montgomery, a former friend of Rogan’s.

House Ade-Afefe is…
…a family of weather mages of Yoruban descent from Nigeria, living in Austin. Adeyemi Ade-Afefe is the daughter of Adepero.

House Madero is…
…a family of brute idiots and guns-for-hire led by their misogynist father, Peter. They can harden their skin and are supernaturally strong. Dave, Frank, Roger, and the twins, Ethan and Evan Madero are brothers and the sons of Linda, Peter’s daughter-in-law.

House Harcourt is…
…a combat house and stupidly protective of its son and heir, Vincent, a psychopathic Prime Summoner who lives to hurt and destroy. Owen and Ella are Vincent’s parents. Alyssa and Liam are his siblings. All Prime summoners.

House Sturm is…
…feared for their storm abilities. Alexander Sturm is a dual Prime in fulgur and aero, controlling lightning and wind. His father was Gerald Sturm.

The Caesar-led conspiracy wants…
…to rule with absolute power. David Howling, an ice mage and Olivia Charles (White Hot) and Adam Pierce (Burn For Me, 1) had been part of it.

The Office of House Records is where you apply to be a House with the very grateful Records Keeper. Major “Mad” Rogan and Colonel Linus Duncan, the former Speaker of the Assembly, will be witnesses. Michael Latimer seems to work for the Keeper. The Assembly rules the magical families of Texas, and Sylvester Green is the current head. Benjamin Cars is one of Nevada’s testers. Orlando Gonzales is one of the arbiters.

Mr Fullerton is with Scroll, Inc, one of three main DNA databases for the Houses. Lenora Jordan is the district attorney for Harris County and Nevada’s hero. Sloan Marcus of House Marcus and a third-generation Prime telekinetic, is unbearably superior. A failing vector is a person whose ancestors possessed potent magic but fails to pass it on to his children, and the magic grows weaker with every generation. NPTN is gene code for neuroplastin. WC stands for Wild Card genetically. Maxine Abner was a hopper. A military grade construct is animated by a Prime zoefactor. An antistasi Prime specializes in mental defense, and Alessandro Sagredo is the best on record. Herbamagos are a branch of bios mages. Summonitor is the official term for summoner mages who summon MCM, magically created monsters, from the arcane realm. There are also teleporters.

The Osiris serum was developed some 150 years ago and given out like candy. Until they realized what it could do. It can do good, and it can create things like Cherry, more alligator than human (Burn For Me); Germann Orr, a real-life minotaur; Jeraldine Amber, the Bangor Banshee; and, Misha Marcotte, the Beast of Cologne. A Verona Exception is when an application is filed by a House to attack another House, and the State of Texas washes their hands of it. A Key is a House secret, a specialization that family members use to charge up their magic powers. Adriana Red had been an upcoming Houston designer; Nevada can’t afford her anymore. Sergeant Munoz is a human cop.

The cover is a stormy blue-violet sky with a funnel cloud touching down. In the forefront is Rogan in a short-sleeved, V-necked white T while Nevada, her body in profile while she looks out at us, is wearing a black tank top and jeans, her…brown?? hair, blowing in the wind. Guess she got a dye job. Her back is up against Rogan, in profile, who has one hand on her waist and the other clasps her arm. The text is all white from the info blurb at the top with the author’s name underneath while a testimonial is to the top right of Nevada’s head. At the bottom, icy white flames outline the title with the series information at the very bottom.

The title is all about Connor, for he’s Wildfire, who would rage and burn until nothing was left but ashes.