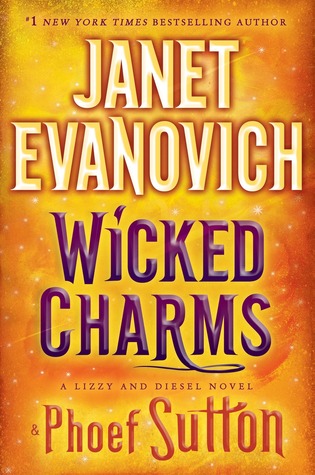 Murdered and mummified more than ninety years ago, bootlegger Collier “Peg Leg” Dazzle once found and re-hid a famous pirate’s treasure somewhere along the coast of New England. A vast collection of gold and silver coins and precious gems, the bounty also contains the Stone of Avarice — the very item reluctant treasure seeker, Lizzy Tucker, and her partner, Diesel, have been enlisted to find. While Lizzy would just like to live a quiet, semi-normal life, Diesel is all about the hunt. And this hunt is going to require a genuine treasure map and a ship worthy of sailing the seven seas . . . or at least getting them from Salem Harbor to Maine.

Greed is eternal and insatiable, and Lizzy and Diesel aren’t the only ones searching for the lost pirate’s chest. There are people who have dedicated their entire lives to finding it, and are willing to commit murder or make a deal with the devil, just to hold the fortune in their hands. One of those people may even be Wulf, Diesel’s deceptively charming and enigmatic cousin. Wulf desires the Stone of Avarice. He also desires Lizzy. It’s hard to say how far he’s willing to go to gain either one.

Third in the Lizzy & Diesel humorous romantic suspense series and revolving around a baker who is still trying to wrap around the idea of being an Unmentionable and the irrepressible Diesel. Based in Salem, Massachusetts. Is this why people thought there were witches in Salem, what with all the “talented” people?

I do keep hoping that the Diesel from the Stephanie Plum Between-the-Numbers books will appear, and I think I’ve been focusing on the wrong character. I’m beginning to think my problem is with Lizzy. Yes, she’s a cute character, but the romance between them makes me nuts. It’s a cute idea with Lizzy and Diesel unable to, ahem, consummate their relationship, but it’s not working. It needs help in the conflict department with more show, more passion. There’s a dynamic missing, and Lizzy and Diesel are simply going through the motions. Maybe Lizzy needs a Joe-Ranger? Another problem I have is with Lizzy being so similar to Stephanie from those droopy doodles to bleaching her eyes, if only she had as much spirit.

I do enjoy Diesel’s attitude. He simply bulldozes right over Lizzy’s objections, no matter if it’s in the bedroom or on the hunt. He is funny as he rolls on and over, and it’s a fun contrast with the responsibility speech he makes later on. Maybe that’s part of my problem? That Lizzy is so easily rolled? She doesn’t seem to have much of a backbone.

“‘Maybe we should do this some other time,’ I said to Diesel.

I love it! Carl is a…*eyebrow waggle*…service monkey. Lizzy’s idea for a hot cookbook — Hot Guys Cooking for Hungry Women. I like the idea of it, but I can see where a publisher would not be excited. Fascinating tidbit of back history on the pieces-of-eight and the Pirate Round. Glo appears to be, um, making progress in her fascination with magic. Just ask Ammon, lol.

How naive is Lizzy? Someone comes at her with a contract, someone who has a nasty reputation, and she doesn’t read it? I found it hard to empathize with her when the fine print got magnified.

Diesel does crack me up with those teasers he lays out, making Lizzy (and us) think he’s using magic before revealing the truth. Nergal is going to be fun as well with his desperate hopes for a social club amongst other Unmentionables. Ammon is a crack-up, especially after Glo has her way with him, but it’s really Rutherford who will scare you. Glo and her Broom. That relationship is yet another crack-up, especially when Broom “goes” for help, lolol.

Huh, another teaser, one Diesel lets drop, and it changes everything around with this switch in perspective. The bond that requires Diesel and Wulf to cooperate in this one thing. Bwah-ha-ha. That last intimate scene with Wulf heats things up, a heat Diesel is quick to hose down.

Wicked Charms is a fun story, a lighthearted beach read that ranges from giggles to eye-rolls.

Arghhh, it’s a pirate’s treasure…and a mummified pirate that sends Lizzy and Diesel on this hunt. A very crowded hunt as too many people want that treasure. Worse, Wulf is on the trail and believes the Stone of Avarice is the magical riches in that pirate’s chest.

Lizzy Tucker is a baker who graduated from Johnson & Wales culinary school, and she works at Dazzle’s Bakery in Salem (she flunked gravy). Her ability is to sense magical artifacts and bake cupcakes. Cat is her cat.

Diesel is an Unmentionable with a very mentionable body, hubba-hubba *grin*. His powers include that of popping in and out and popping locks. Carl is Diesel’s monkey, and he has a better grasp on life than most people. Diesel is in competition with his cousin, Gerwulf Grimoire, a.k.a., Wulf, a very urbane, “civilized” villain. Steven Hatchet has the same ability as Lizzy, but he’s working for Wulf and loves being his minion. I agree with Lizzy about the insult. Great-Uncle Gustav (Grimoire?) thinks he’s a fruit bat. Uncle Gustav, not Hatchet, although I think that’s up for debate. Diesel also has a Cousin Maria and an Aunt Lydia who belongs to a coven. Sydney is Diesel’s scary boss.

Dazzle Bakery has been…
…owned by the Dazzle family since Puritan times. The current Dazzle is Clarinda, a.k.a., Clara, who used to have special powers. Gramps Dazzle is a lecherous go-getter with his scooter; Benita is his caregiver. Glo is the counter girl with a wardrobe somewhere between goth and the Sugar Plum Fairy, a friend of Lizzy’s, and hoping she’s Samantha Stevens from Bewitched. (Lizzy figures it’s more likely that she’s Aunt Clara.) Josh is Glo’s latest boyfriend who gives tours at the Pirate Museum.

The Dazzle Speakeasy was abandoned at the end of Prohibition.

Salem PD
Theodore Nergal is the soft-looking coroner with a passion for red-velvet cupcakes. He’s got a power too; he can sense the last thing a dead person was thinking. Hmmm, I think Nergal just got added to the cast of regular characters…

Emily Shipton had a garage sale. With a Magic 8 ball. Spencer Rossitto is the manager at Salem Willows, a seaside amusement park. Mr. Bork. Myra Belkar has a nasty old shed that needs tearing down.

Martin Ammon has a nasty reputation as a megalomaniac taking over people and companies, folding them over into his publishing and media conglomerate. He sees himself as Mammon, the personification of wealth and greed. Rutherford is Ammon’s “devoted assistant”. And he ain’t kiddin’. Bernie Weiner (the name suits him) is a detective who needed better gun management. Mr. Carter is part of Ammon’s security team along with Steve and Charles.

Billy McCoy was Ammon’s great-grandfather, a notorious rumrunner in partnership with Collier “Peg Leg” Dazzle, Clara’s great-uncle. Palgrove Bellows, a.k.a., The Gentleman Corsair, was a silversmith who turned pirate and hid a treasure he plundered from the Gunsway.

Professor Quentin Devereaux teaches history at Salem State and is the resident consultant at the Pirate Museum.

There are seven SALIGIA Stones, which hold the powers of the seven deadly sins. In the wrong hands…all hell could break loose. Unmentionables have enhanced abilities, such as levitation, lock picking, directing lightning, and more. The People with Special Abilities is a policing organization for Unmentionables.

The cover is a starry explosion on a background of bright yet misty oranges and yellows. Evanovich’s name is top and large in an embossed and outlined white with the book’s title in a gleaming embossed purple followed by Sutton’s name at the bottom in a complementary embossed and gleaming orange.

The title is about Wulf as he plies Lizzy with his Wicked Charms.