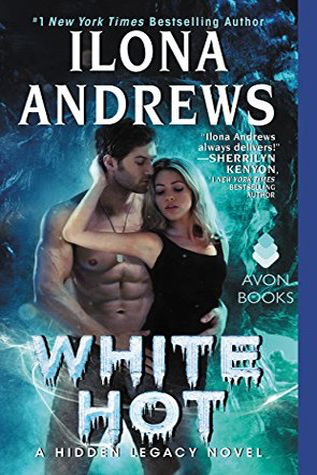 Second in the Hidden Legacy paranormal series, and it’s escalated to a paranormal romance revolving around Nevada Baylor and Mad Rogan. It’s been two months since Burn For Me, 1.

In 2017, White Hot was nominated for the Goodreads Choice Award for Romance.

Whew, the conflicts they are a’many from the need for Nevada to hide her skill, not knowing what Rogan sees in her (or how short it would be), Arabella’s and Leon’s abilities (or the lack thereof), the grief in Cornelius’ eyes, and all the attempts to kill off Nevada and her family.

It seems that the conspiracy we first encountered in Burn For Me is still alive and is the series arc. It’s quite useful as it allows Nevada’s character her own arc even as it reveals family secrets.

It really is quite brilliant, as it allows Andrews to create a complex story with its own complicated world, and one that showcases the opposite ends of the power spectrum.

I like this quote. It makes so much sense about humanity, lol.

“A wise man once said, ‘A human mind is the place where emotion and reason are locked in perpetual combat’.”

It’s definitely progress for Nevada’s character, as she’s discovered she’s more than just a lie detector and discovers hidden facets about Rogan. As well as unexpected insights into the life, the past, that created him.

A different sort of progress occurs with Nevada’s sense of duty, stemming from the Baylor family rule number 3. I can understand it, I believe in it, and it does lead to increased risk for Nevada, one that keeps on mounting.

“Rule One: We stay bought.

Rule Three: We have to live with our choices.”

It’s a different world Andrews has built, one that makes me think of the backstabbing Italy of the Renaissance. This one controlled by magical powerhouses who will stoop to any nefarious deed. The only corporations with real power are owned by the Houses. Governments listen to them. So it makes a horrible sense that progeny be as powerful or more powerful than the parents, hence the arranged marriages. They don’t consider marriage until the interesting party’s genetic background is examined! It’s so bad, that one of the victim’s husbands is more concerned with how her death will affect his social position. Wait’ll you read what his concern is! Jesus.

Okay, it’s a hot series, er, story, er, pair of characters with a fabulous family dynamic among the Baylors — everyone of them is unique. The primary way they aren’t…is when faced with a threat to the family. You can’t help but laugh your way through the times that relieve the tension Nevada and Mad deal with, including the childish reactions of some characters *snicker*.

I do love the warehouse they use for home and business. So practical, and always a dream of mine to re-purpose a building that was never a house.

It’s so sad about Cornelius. The weaknesses of being an animal mage and finding someone who could counter those weaknesses appears to be miraculous. But just wait until you read about the three burglars, lol.

Nevada’s strength of will amazes me, and we have a ringside seat to it since Andrews uses first person protagonist point-of-view. Rogan, now he has a different kind of strength. One that terrorizes anyone who recognizes him.

Whew. We get a lot more background on Dad Baylor, and I can see why Grandma hadn’t liked him. But it is through him that Catalina has her power, and it. Is. Scary. And funny all at the same time.

White Hot is tense…and gets tenser, and there is no lack of action. In fact, I’m exhausted.

Nevada is ticked. Not only has Rogan not called her, but Augustine is sending her lost causes. Lost until Rogan appears, then it becomes obvious it’s all more than lost and gone way past dangerous.

Nevada Baylor heads up her family detective agency, Baylor Investigative Agency, with a skill as a truthseeker who fires with deadly accuracy. Nevada rebuilt her father’s legacy, which employs two sisters (Catalina and Arabella); two cousins (Bern, a Magister Examplaria, and his younger brother, Leon, who is so depressed because he doesn’t have an ability); Penelope (Mom), a former army sniper whose ability ensures she never misses, walks with a limp); and, Grandma Frida Afram, who has an affinity for vehicles — they speak to her (Leon had been her husband, their grandfather). Bern does most of the computer research in the Hut of Evil. Romeo is the M551 Sheridan tank.

House Rogan is…
…led by billionaire “Mad” Rogan, which is how most people know him. Or the Scourge of Mexico, the Butcher of Merida, or Huracan when he was an army major. Before that, he was the Bubble Lieutenant. Nevada knows him as Connor, a fourth-generation Prime. And a warlord.

He employs an army of men including the newest recruit, Troy Linman, providing security to Houses through Castra. Bug, a.k.a., Abraham Levin, is a security surveillance expert who had been “swarmed” and is now chief of surveillance for Rogan; he’s way past his life expectancy. Napoleon is his protective French bulldog. Luanne had been one of the sixteen who walked out with Rogan. Others were/are Watkins, Tiana, Michael Rivera is Rogan’s right-hand man in charge of a defense crew, Hanh Nguyen is ticked at Grandma, Melosa Cordero is an aegis sent to guard Nevada, Margaret is part of Rogan’s security, and Colin. Dr Danielle Arias is Rogan’s personal physician for him and his men. Martin is Arias’ twenty-four-year-old nephew who had PTSD issues. Sergeant Teddy is a pacifist grizzly.

Captain Gregory died in the air; Hayashi was wounded. Jiminez is part of Rogan’s nightmares.

Kelly Waller is Rogan’s cousin who had been excised. She set her own son, Gavin Waller, up to get her revenge. Sassy is Kelly’s foo-foo poodle.

Leonora Jordan is the Harris County district attorney and well-respected by most, especially Nevada. Atwood is her second-in-command.

House Harrison is…
…built on animal magic. Cornelius Harrison is a stay-at-home dad (and a Significant animal mage) while his wife, Nari, works as a lawyer for Forsberg Investigative Services. Their daughter, Matilda, has a Doberman Pinscher bodyguard, Bunny. Talon is a red-tailed hawk, Balu is a badger, and Loki and Hermes are ferrets. Diana, a Prime, is Cornelius’ sister and the head of the family.

Montgomery International Investigations (MII) is…
…the security company of House Montgomery that is led by Augustine Montgomery, a Prime illusionist, who also owns the mortgage on the Baylor Investigative Agency. Lina is his secretary.

House Forsberg
Matthias Forsberg, a hopper, is head of the family while his company, Forsberg Investigative Services, concentrates on corporate espionage. His political affiliation as a House is with the Stewards. His adult sons are Sam Houston Forsberg and Stephen Austin Forsberg.

Marcos Nather, a lawyer who works for Forsberg, was married to Jeremy, a software engineer, and they have two kids. Elena de Trevino, another lawyer, is technically married to the greedy Antonio, an investment analyst. Both were rated Average as mnenonics and have three children, who include John and Ava. Estelle is their maid.

House Baranovsky is…
…led by Gabriel Baranovsky, a very wealthy oneiromancer, who is having an affair with Elena and loves to collect. Elsa is part of the staff. Some of the partygoers include Cheyenne and Lady Azora who is Michael Latimer‘s aunt.

House Duncan
Linus Duncan is very old and a very powerful, respected Prime who used to be the Speaker of the Upper Chamber.

House Sherwood is…
…the family into which Rynda Charles, a telekinetic and psionic, married Brian, their head of the family. They have two children: Jessica and Kyle. Olivia Charles is Rynda’s terrifying mother, a psionic Prime, who had intended for Rogan to marry Rynda.

House Howling is…
…a fulgurkinetic house headed up by Richard Howling. David Howling is a dark horse for the family. Diana Collins is David’s mother and registered as an aquakinetic Prime with psychrokinetic specialization.

House Tremaine is…
…led by Victoria Tremaine, a Prime. She is the bogeyman who terrifies other Houses. House Shaffer is another House that shares the same abilities.

Harper Larvo is a joke. A socialite whose ability (and her family’s) has been sliding downward since her grandparents. Jaroslave Fenley, a Forsberg lawyer, had had an affair with Harper. Brown, Ray Cannon, and Kowaski took the contract because they were closer. Philip “Azazel” McRaven is a psychotic illusion mage and a good tracker. Rendani Mulaudzi is a South African mercenary with Scorpion Protection Services. Christopher van Sittert was the team leader. Dedalus Corp owns a ranch outside Houston where Jake, Gabriel, and Marsha work.

The Assembly is an unofficial executive body that governs magic users at state and national levels. There are two political parties: Stewards are pro-mage and Civil Majority is pro-people. To be considered a House, a family must have at least two Prime magic users within three generations. A Prime safeguards the family wealth and marries to ensure the ability passes on. An aegis is a human bulletproof shield. Enerkinetics command raw magic energy. Hoppers compress the space around them and propel themselves or others through it. Swarmers are bound by the military to “something” from the arcane realm. Egocissors manipulate. Cloaker mages make you invisible by cloaking the minds of others. An illusion and psionic mage temporarily overload another person’s mind in different ways. MCMs are Magically Created Monsters that Summoners can bring from the astral realms. There are also barrage mages, fulgurkinetics who shoot lightning, aerokinetics, elementalists, psychrokinetics are ice mages, transporters, and more.

A dark horse hides their abilities so as to operate as assassins for their families. The Verona Exception was inspired by Romeo and Juliet and requires a House(s) to file a claim with the DA’s office to allow retribution between the named Houses. Caesar is the title of the head of the conspiracy. The Osiris serum was discovered in the late 1800s and was the source of the magic. Excision is a punishment in which a magical family essentially shuns you, leaving you with no resources of any sort.

Senator Timothy Garza, a Civil Majority, was assassinated. Jeff Caldwell is a pedophile who won’t confess about young Amy Madrid. Adam Pierce (Burn For Me) was a lunatic pyrokinetic. Shockers can incapacitate a power user. The Herald is a major social network. Dr Martinez is a grief counselor. Ferika Luga is a dress designer to the Houses, appointments only. Professor Cormack was a Classics history teacher at Harvard with a hangup about homosexual Greeks. Cazadores are Mexican Special Forces.

The title may be White Hot, but that cover is ice cold with its blues in that underground cave with icicles dripping from every letter of the title at the bottom of the cover. It’s a half-naked black-haired Rogan, six-pack quite evident, holding the blonde-haired, jean-clad Nevada in his arms. One of her arms is up with her hand cupping the back of his neck. All the text is white from the info blurb at the very top, the author’s name, the testimonial to the right of their heads, the publisher’s name at chest level, the icy title, and the series information at the very bottom.

The title is what Nevada does for Rogan, burning White Hot.