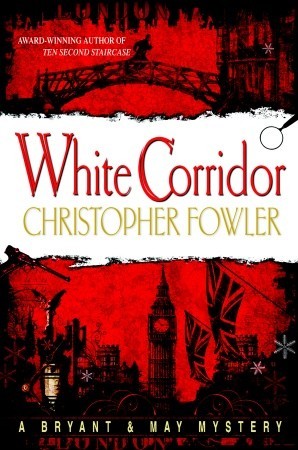 Fifth in the Bryant & May detective mystery series and revolving around two over-retirement-age detectives who are quite unorthodox and based in London with each story in the series a case in Arthur’s biography. I’ll be curious to read how Fowler intends to end Bryant and May. As a series, I mean.

Time marches on in this locked room mystery filled to the brim with red herrings. Nor is that autopsy room the only locked room, as Fowler locks us out with his craftily scattered “clues” about Madeline and Bellocq whose own situation screams out the need for parents to be licensed.

Fowler builds up the tension and then flips a clue out to distract you again and again only to return to the build-up. One that will knock you on your backside. It’s an unexpected switch-up that will leave you gobsmacked with its mad mix-up of deception and denial that ends in such horrible destruction and senseless losses.

Still, you can’t help but love Arthur for his whimsical self-centeredness and snarky attitude that slaps away at officialdom and bureaucracy. I gotta admit I’d love to taste some of those candies he carts around, if only because of their names. Pink sugar shrimps? Milk Bottles? I adore April as well, and I’m so glad that April is enjoying her work. She certainly saves the day at the end, lol.

It’s a fascinating blend of today and yesterday, as Bryant reminisces on their journey to Devon about a past we have only read as a dry history. Listening to Bryant brings that past to life, creating a reality one can empathize with, of his childhood before the war, of superstitions. Then again, there’s that arcane fascination of his with woo-woo anything.

Fowler likes to rant on about society and its ills as well. Not that I disagree with him. At. All. It simply strikes me as strange to “listen” to a couple of detectives discuss the social environment with such intellectual depth. Fowler, er, I mean, May, is certainly accurate about the Internet, lol.

I didn’t buy Johann falling in love with Madeline, but then maybe that’s why his interactions with her felt so disjointed. It certainly was a scary chase for Madeline and Ryan, and an unhealthy obsessive one by Johann, leading to a scene in which Sherlock Holmes’ deductive style comes to the fore.

Oh, mama, *she says laughing*, that visit with the princess was so fraught. While Fowler is describing all the “necessary details” for the royal visit, I was cringing inside, as this is simply not how the PUC operates *more laughter*. It is amazing, however, what loyalty and a can-do attitude can accomplish…ROFLMAO.

We’ll never be able to set the world upright and end all of its inequalities, but each of us can make a small difference until they add up to something more.”

Poor May. Land is closing up shop while Banbury switches out the computer systems for the office. It’s the perfect opportunity for Bryant to snag May’s help for the coven at the International Spiritualists’ Convention in Plymouth.

A “vacation” that backfires when a member of the PCU is murdered behind a locked door, and Kasavian has scheduled the princess to tour the station…while Bryant and May are trapped with a murderer on a snowed-in roadway. It’ll be up to the junior members of the PCU to figure it out and save the day.

Partners (and Senior Detectives) Arthur Bryant (with his fascination for historical tidbits, the occult, practical jokes, and ghastly experiments — he mostly means well) and John May (of the fashionable suits and easy way with the ladies) refuse to retire. The plump Antiguan, Alma Sorrowbridge, is Bryant’s former landlady who moved in with him to his not-yet-converted false-teeth factory home. Monica Greenwood is the artist with whom John has been having an affair.

“Mr. Bryant is so old that most of his lifetime subscriptions have run out.”

The Peculiar Crimes Unit (PCU) is…
…a highly unorthodox specialist police division that has come into disrepute and is based in Mornington Crescent. Detective Sergeant Janice Longbright emulates screen stars of the 1950s and adores doing undercover work. Oswald Finch is the aged unit pathologist at the Bayham Street Morgue who finally intends to retire to his place in Hastings. Dan Banbury is the crime scene manager and IT guy while Giles Kershaw is technically their forensic scientist and social sciences liaison. The rest of the unit includes Detective Constables Meera Mangeshkar (she’s ambitious and hard; Jezminder is her sister having problems with an ex-boyfriend, Jake) and the spatially challenged Colin Bimsely and the agoraphobic April May, John’s granddaughter, who is the office manager. Raymond Land is the “acting” unit chief — and has been for the past few decades; Leanne is his long-suffering wife who was caught, ahem. Crippen is the office cat.

The bitter Sergeant Renfield has a moral blindness when it comes to his own men.

Leslie Faraday is the Home Office liaison with PCU. Oskar Kasavian is the new supervisor of Internal Security.

“It was his absence of humanity others found so perturbing, as if Countess Bathory and Vlad the Impaler had mated to create the perfect bureaucratic hatchet man.”

Her Royal Highness Princess Beatrice of Connaught, a.k.a., Princess Poison, a.k.a., Baroness Katarina-Marachmaine von Treppitz, has a terrible reputation, and this second cousin once removed is the weapon Kasavian intends to use against PCU. Rosemary Armstrong is the princess’ angry and unfulfilled social secretary.

The thirty-year-old Madeline Gilby works as a grocery store clerk and fears her abusive husband, Jack. Ryan is their son. Andrea is her half-sister. Kate Summerton is a fraud who runs a women’s shelter, scamming middle-aged women. Roger is her husband. Jessica is one of the attendees.

France
Johann Bellocq is a survivor. He has to have been to have survived his mother! Unfortunately, he took his mother’s words too much to heart and lives a larcenous life. His grandfather, Marcel, is dying. La Société Du Diable is a cybersite. Mme Funes is the proprietor of L’Auberge des Anges. Momo is the chef at La Vieille Ville.

On the snow-covered road…
…Danny is the van driver. Jez Morris is a staff nurse at Exeter General Hospital. Louis is a delivery driver for a department store. Maggie Armitage, an old, old friend of Bryant’s, is the Grand Order Grade IV White Witch of the Coven of St. James the Elder. Maureen will be the designated driver. Wendy is the organist — she speaks Piskie. Dame Maud Hackshaw is a true force for positive energy. Stanley Olthwaite is the junior warlock who impressed at the snack ‘n’ spells party.

Eleanor Newman was a camerawoman at Pinewood Studios before she retired. She’s also a hard-to-impress witness, lol. The Camley Road Canoe Club kicked Owen “Dizzee” Mills out. Pravin works at the club. Lilith Starr is the daughter of self-help guru Felicity Bronwin who needs quite a bit of help herself. We won’t bother mentioning her cypher of a husband. Samuel/Samael had been Lilith’s other half. Dr. Harold Masters is an academic with the Insomnia Squad. Edward Winthrop is a lawyer who was killed in a police station in 2004. Pascal Favier was his attacker. Johann Bellocq owns a villa in Eze-sur-Mer.

The Temple is…
…an exclusive salon with its own scam and is owned by Monsieur Alphonse, a.k.a., Darren Spender, a former Chelsea footballer. Sonya is one of his beauticians. Dr R. Martino is one of their trained physicians. Miss Grutzmacher and Juan-Luis do inductions at Circe, the health club side of things.

The cover is red with a ragged white “corridor” of a banner crossing its center line, providing a background for the red of the title and the gold of the author’s name. The collage of images against that red background includes elements from the story, from the bridge arching across the top to the blended London skyline at the bottom.

The title should really be plural for the four crossroads, the corridors that Stanley and Maggie “see” via the spirit writing, the White Corridor through which evil can pass.