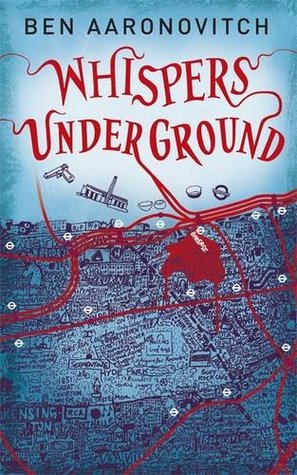 It begins with a dead body at the far end of Baker Street tube station, all that remains of American exchange student James Gallagher—and the victim’s wealthy, politically powerful family is understandably eager to get to the bottom of the gruesome murder. The trouble is, the bottom—if it exists at all—is deeper and more unnatural than anyone suspects . . . except, that is, for London constable and sorcerer’s apprentice Peter Grant. With Inspector Nightingale, the last registered wizard in England, tied up in the hunt for the rogue magician known as “the Faceless Man,” it’s up to Peter to plumb the haunted depths of the oldest, largest, and—as of now—deadliest subway system in the world.

At least he won’t be alone. No, the FBI has sent over a crack agent to help. She’s young, ambitious, beautiful . . . and a born-again Christian apt to view any magic as the work of the devil. Oh yeah—that’s going to go well.

Also by this author: Midnight Riot, Broken Homes, The Hanging Tree, "The Furthest Station", Lies Sleeping, False Value, "What Abigail Did That Summer"

Third in the PC Peter Grant urban fantasy detective mystery series and revolving around an apprentice wizard in today’s London. This story takes place around Christmas.

It’s business as usual, although Peter’s mum thinks his being a witch is more respectable than being a cop, lol. It’s just a dip in the overflowing bucket of hilarious and satirical humor in Whispers Under Ground, part of a series that is a combination of annoying police bureaucratese at which Peter pokes fun and the magic of this cynical copper. Must be Terry Pratchett’s influence *more laughter*.

Yeah. Right. Reynolds tells Peter that the FBI investigates all crimes against Americans that occur overseas and Peter throws back the question of the crowbar and the Soho assault. Yep, a well-earned cynicism.

“…we police never like to use real words when we can use incomprehensible jargon instead.”

In police circles, he’s thought to be a train wreck what with burning down Covent Garden, driving the ambulance into the river, and the helicopters. Then there’s that paper clip and Peter’s thoughts about what it could do to the rest of the stationery, lol.

I am somewhat confused. In Moon Over Soho, 2, Aaronovitch says Peter is a detective constable, and now he’s back to being a police constable.

I am so gonna love the trainspotting Abigail. When she turned eleven, she told her dad that if anyone came near her hair again, she was gonna call Social Services, lol. And it turns out she can see ghosts. The weaselly Zach is going to be an interesting addition; I suspect this con artist will be added to the core cast of characters.

Oh, yeah, the goblin market. Where all the punters despise the Old Bill, until that demon trap goes off…lol…yeah, “now you want the police”.

If you love poking fun at Authority and most anything else in life, you have GOT to read PC Peter Grant. It’s dang hard to put down!

It begins with a dead body at the far end of Baker Street tube station, all that remains of American exchange student James Gallagher — and the victim’s wealthy, politically powerful family is understandably eager to get to the bottom of the gruesome murder. The trouble is, the bottom — if it exists at all — is deeper and more unnatural than anyone suspects.

Back-to-Police Constable (PC) Peter Grant is apprenticed to learn magic with Detective Inspector Thomas Nightingale, his boss, governor, and master. In Moon Over Soho, 2, PC Lesley May, Peter’s magic-damaged colleague (see Midnight Riot, 1) has become Nightingale’s second apprentice. All three live at the Folly, the London headquarters for their, ahem, “other stuff” division, the Specialist Crime Directorate 9, a.k.a., Specialist Assessment Unit. Molly is something other and acts as the Folly’s housekeeper and cook. Toby is the little dog they inherited from a victim in Midnight Riot. Professor Postmartin is the magical archivist. Frank Caffrey is their fire brigade contact and an ex-Para who heads up the magical SWAT team, the Armed Response Unit.

Peter’s family, some of ’em
Richard “Lord” Grant is his dad, a jazz musician making a comeback. His mum is Fula, a Sierra Leonean tribe from West Africa. Alfred Kamara is a cousin who lives in the same neighborhood, the Peckwater Estate. His thirteen-year-old daughter, Abigail, extracted a promise from Peter about learning magic. Aunty Jo is actually an old schoolfriend of his mum’s.

“‘Do you even have a background on mental health?’

I thought of my parents but I didn’t think they counted so I said no.”

London Metropolitan PD
The Scottish Dr. Abdul Haqq Walid is a world-renowned gastroenterologist and cryptopathologist keeping an eye on how much magic Lesley is doing. Detective Inspector Miriam Stephanopoulos knows about the magic, but doesn’t want to know about the magic. Detective Chief Inspector Seawoll is back in charge of the Murder Team and is a hardliner about good old-fashioned policing. In other words, no magic. DC Sahra Guleed calls herself a Somali Muslim ninja. DC David Carey is also the family liaison. Detective Sergeant (DS) Bob will handle the security of the case. Simon Kittredge is Counter Terrorism Command (CTC), liaison to Special Agent Reynolds.

London Transport is…
…the railroad system including the Underground. Sergeant Jaget Kumar is a British Transport Police (BTP) officer who can officially maneuver around the live tracks. He also keeps track of the weird shit. David Lambert is a BTP patrolman.

The Rivers are all…
…gods and divided into Father Thames‘ family who live above Teddington Lock and Mama Thames’ who live below the lock. The original Sir Tyburn is unhappy about the theft of his birthright. Mama Thames was a wanna-be nurse who jumped in the River Thames in 1957. Beverly Brooks, one of her daughters, is a hostage with Father Thames. Lady Tyburn is the rebellious, politically oriented daughter. Fleet is a stocky one and hosts a radio show. Ziggy is the captain dog of Fleet’s dogs. Effra Thames, the goddess of the River Effra, Brixton Market, and the Peckham branch of the Black Beauticians Society, has a B.A. in History of Art and is hangin’ with Oberon, a cowboy from New Jersey, at the goblin market. Olympia is fraternal twins with Chelsea, respectively the goddesses of Counter’s Creek and the River Westbourne, and they’re running an underground club.

James Gallagher is an American art student attending St. Martins College (his case will be named Operation Matchbox). Senator Gallagher is James’ father. Zachary Palmer, a.k.a., Goblin Boy, is Gallagher’s roommate — and an itinerant dodgy half-fairy. Eric Huber is Gallagher’s tutor and studio manager. Sonya is the Italian cleaning lady tidying up the mess. Special Agent Kimberley Reynolds is with the FBI and was sent on a watching brief on behalf of James’ father.

Shakespeare Tower, a residence designed by “the same Guernsey Gun Emplacement school of architecture” with a Grade II listing, is where Albert Woodville-Gentle, a retired, wheelchair-bound wizard, lives. Varenka is his Russian nurse.

Ryan Carroll is an artist who has an exhibit at the Tate Modern. Siobhán Burke is Ryan’s alibi. Kevin Nolan and his smarter brother are Nolan and Sons, a produce vendor, using the old warehouse that was once the Unbreakable Empire Pottery Company.

Graham Beale is CEO of Beale Property Services. His great-great-grandfather, Eugene “Ten-Ton Digger” Beale, was an illiterate navvy from Kilkenny who founded the pottery along with Patrick Gallagher and Matthew Carroll in 1865.

The Quiet People, a.k.a.…
…the Whisperers, live dry and comfy. Stephen is Elizabeth’s fiancé, technically, although it’s Zach who’s really interested; Matthew Ten-Tons is their leader; and, Elizabeth, Matthew’s daughter, is more interested in James Gallagher.

The Little Crocodiles were…
…a student dining club illegally taught by Geoffrey Wheatcroft, a theology professor (and wizard) at Magdalen College in Oxford. The Faceless Man whom we met in Moon Over Soho was probably taught by Wheatcroft.

Vestigium is an imprint magic leaves on physical objects. Hypothaumaturgical degradation is what kills you if you do too much magic. Ettersberg was the last magical battle in World War II. Breaking their staffs is the euphemism for quitting wizardry and taking up a mundane life. Forma is how you think the magic into action. Lacuna is a hot spot of residual magic. A spell is a combination of forma. Demon traps are weaponized ghosts. Sir Isaac Newton was the founder of modern magic. Isaacs is a slang term for wizards.

A goblin market is a flea market for those who live in our world, and this one is located in Powis Square. A nazareth is an illegal venue where stolen goods are sold on by strangers to strangers. Hyacinth is a goth girl who deals in figurines and may well be cited “for wearing heavy black mascara in a built-up area”. Robert Su is assistant to Madame Teng, a Chinese Taoist sorceress from Taiwan. Macky is a graffiti artist, and a ghost.

The cover is the same black-and-white aerial view of London, only this time, the broad red ribbons against the blue–deep lilac background are the London Underground with those wisps from the title forming exchanges as they trail down from the title. I do like the curvaceous title — a reflection of the roller-coaster aspect of the story.

The title refers to what Peter and company find, the source of those Whispers Under Ground. 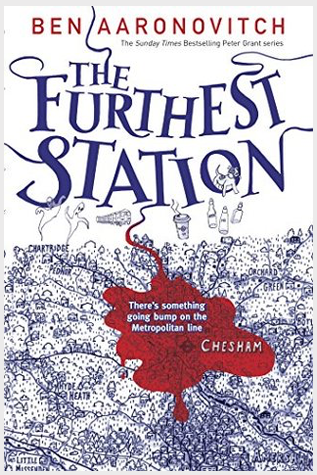