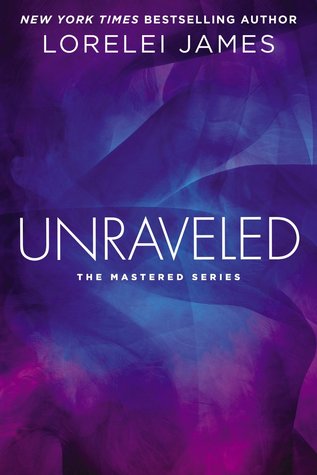 This book may be unsuitable for people under 17 years of age due to its use of sexual content, drug and alcohol use, and/or violence.
Buy on Amazon
Goodreads
Also by this author: "Schooled", Wrapped and Strapped, What You Need, Just What I Needed, Racked and Stacked, Hang Tough, Spun Out, All You Need, When I Need You, I Want You Back, Want You to Want Me

I do enjoy the inside look we get at running a martial arts studio with the conflicts and concerns they have. One of the minor conflicts is why Black Arts isn’t doing well with their MMA fighters.

I have to say I was uncomfortable with Knox and Shiori’s explorations. I guess Knox isn’t the only one who doesn’t see a man as a submissive. Other than that, I like the characters, and I do enjoy their interaction. Knox’s sisters are a crack-up.

In Unraveled the focus begins with the animosity between Shiori and Knox. It’s pretty funny later on when they realize that animosity is part of the attraction. In the meantime, the incident Shiori witnesses Knox handle with Abby and Addy is too funny — and opens Shiori’s eyes. Then there’s the wheeling and dealing for how their relationship will work. It’s a rare thing for the man to be the pushy one in terms of dating, lol.

There is a too-brief scene in which Max gets his comeuppance, *more laughter*. Of course, he’s also courting danger, moving in on Shiori. More danger pops up when Shiori does humiliate Knox. A promise she broke. And, oh mama, does Deacon ever lash out at her! He makes some excellent points.

It does make sense why Shiori goes to Twisted in disguise. The club also provides James with opportunities to educate Knox (and the reader) about bondage and submission in a different way. It seems that Master Dan also has some advice for Knox.

Oh, that was just nasty. We get background information, at last, on how Shiori got played into introducing Ronin to Naomi. Seems she isn’t the only Okada to screw up. And it’s enough to make you want to cry when you learn what it is that Shiori really craves. Knox has his own childhood memories of how hard his mom struggled.

I don’t understand how Master Daichi releasing Ronin as a student affects Black Arts dojo? It does cause Knox to have some really stupid reactions which leads to some dumb moves on Shiori’s part. Talk about annoying tropes! And yet another one (it was kinda sweet, too) is Shiori’s confession to her mother.

The underlying message in Unraveled is of a male learning he’s submissive, and how Shiori slowly leads him in his discovery. Yes, slowly, very slowly, because Knox is fighting every step of the way.

It’s an attraction Knox is fighting…Ronin is his friend, boss, and mentor…and Shiori is Ronin’s sister! It does “help” that, that feisty little thing’s skills are better than his…

Shiori Hirano, a.k.a., She-Cat or Shitake…or Mistress B, is Ronin’s sister who has taken a sort-of leave-of-absence from Okada Foods, the family conglomerate, to work at Black Arts dojo. Shin Hirano is her ex-husband. And, oh boy, what a story that one is! Jenko had been her married bodyguard in Japan. Tammy is Shiori and Ronin’s mother. Nureki Okada is their grandfather. Nuri is a very new newcomer.

Knox “Ob-Knox-ious” Lofgren is Shihan and Ronin’s second-in-command as well as the dojo’s general manager (Shiori calls him Godan because she is one belt higher). He also has an interesting, um, side-job. Vivie and Zara are his much-younger sisters who live in Golden with his mom, Lisa, and stepfather, Rick Christensen.

…owned by Ronin Black, a bakushi master, who is currently honeymooning in Japan with his new wife, Amery. Deacon “Con Man” McConnell is Yondan and Ronin’s third-in-command; he actively tries to get students to quit. Sandan Zach, Ito Tohora, Jon, Terrel, Tasha, and Chelle all work there as well. Katie Pettigrew Gardiner is doing well as promotional manager for the newly merged Black and Blue Promotions, a result of the merger with ABC, Alvares “Blue” Curacao‘s Brazilian jujitsu dojo. Blue has his own set of programs. Sophia “Fee” Curacao is his sister. Gil and Fisher (he’s training for MMA fights as well as running his construction business) are instructors for Blue’s side.

Students at Black Arts include…
…Jillian, Addy and Abby (twins with issues), Dylan, and Radley and Lotte who are useless. Ivan Stanislovsky, Max’s son, is working hard, training as an MMA fighter. Max himself is one of the richest men in Denver, and all on the down-and-down! Molly Calloway (she works for Amery at Hardwick Designs) survived an attack and has taken classes at Black Arts; she’s currently taking kickboxing classes from Fisher. Presley is one of Molly’s co-workers.

Maddox Byerly is Gil’s brother-in-law who is desperate to get out of his marriage with the psycho Roxanna and his job as an MMA coach with Tieg, Garvey, Linson.

Steve Atwood runs another martial arts club. Mia is one of his fighters, a real nasty bitch. And I do mean “nasty”!

The cover is scarves floating and overlapping in violet shades of blue to red. The text is all in white.

The title is what happened to Knox, as he comes Unraveled.