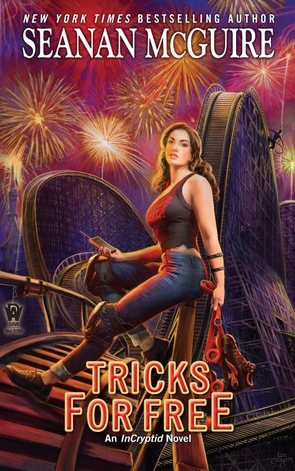 Buy on Amazon
Goodreads
Also by this author: Chimes at Midnight, Indexing, The Winter Long, The InCryptid Prequels, Pocket Apocalypse, A Red Rose Chain, Reflections, Once Broken Faith, "Dreams and Slumbers", Chaos Choreography, Magic For Nothing, Indigo, Every Heart a Doorway, The Brightest Fell, "Of Things Unknown", Beneath the Sugar Sky, Night and Silence, "Suffer a Sea-change", The Girl in the Green Silk Gown, "The Recitation of the Most Holy and Harrowing Pilgrimage of Mindy and Also Mork", That Ain't Witchcraft, "The Measure of a Monster", The Unkindest Tide, "Hope is Swift", Come Tumbling Down, Imaginary Numbers, "Follow the Lady", "The Fixed Stars", "Forbid the Sea", "No Sooner Met", Across the Green Grass Fields

Seventh in the InCryptid urban fantasy series and revolving around the Price-Healy family, still with a shoot-to-kill-on-sight order on them by the Covenant of St. George. The focus is on the youngest daughter, Antimony Price, who is on the run.

There’s plenty of action and minor stories within the overall story of Antimony hiding out and trying to get a handle on her magic. And I did enjoy how much of the previous series stories McGuire manages to pull in to Tricks for Free. Crossroads and hitchhiking ghosts, the family issues involving Grandpa Thomas and Artie, Antimony’s past with her derby team and when she was with the carnival, and then adding in the glee of those magic lessons and Sam’s luck.

Throwing in Cylia with her jink luck certainly makes things exciting, as ya just don’t know which way the action will go. And as much as I dislike snakes, I crack up at McGuire’s descriptions of how Megan’s “hair” acts out, lol.

It’s a first person protagonist point-of-view from Antimony’s perspective, and hoo boy, the in-fighting amongst her fellow employees at Lowryland! Yep, makes it a real-world experience, all right.

That amusement park…it’s an interesting blend of rah, rah, yay, rah…on the outside with penny pinching employers on the inside and a beautiful leavening of acceptance by Antimony of the cryptids around her. Everyone is welcome by the Prices *grin*. With all the hassles of working a tourist destination with all those kids and babies, I’ll visit Disneyland with a whole different perspective after this!

It’s about family and friends, about acceptance, love, a willingness to accept reality, and a desire to survive up against manipulative greed and betrayal in a simple human contract, however unexpected.

The Aeslin mice are my favorite part of the series, but they don’t appear much in Tricks for Free. The mice see their job as keeping the family history, so it’s essential there be at least one mouse with each member of the family. Oopsies…

I’ve slowly been working out the genealogy, and there is no way that Elsie and Artie can be Antimony’s cousins if they’re Kevin’s siblings, especially since Kevin is the dad of Verity, Alex, and Antimony. They’d be aunt and uncle. So what gives? What am I missing?

The one bit that really annoyed me about the story was having to struggle so hard to work out who all the “partners” were of that underground cabal.

In a desperate move to throw off the Covenant and to hide from her family, Antimony “joins the circus”. Again. Well, where else can she hide from a tracking spell but with a huge crowd of people?

Now if she could just get her fire magic under control…

Melody West, a.k.a., Antimony Price, youngest daughter of the Price family, is a cryptozoologist in training whose fire magic is out of control. Verity is her older sister who trains as a dancer. Alex, her brother, worked at the Columbus Zoo.

Thomas Price is the magic-using grandfather who went missing; he was also a member of the Covenant of St George. Grandma Alice is Thomas’ wife, and she’s usually gone, dimension traveling for Grandfather. “Aunt” Mary Dunlavy had been the Price babysitter back in “Oh Pretty Bird“, 0.1, and now she’s a crossroads ghost, and “Aunt” Rose Marshall, a.k.a., The Girl in the Green Silk Gown, is a hitchhiking ghost (both are in Sparrow Hill Road, 1 ). Uncle Al is a jink living in Las Vegas.

Jane Healey-Price was Thomas and Alice’s daughter, and she married Theodore Harrington, an incubus. Jane and Theodore have three children: Elsie; Artie, the reclusive, half-incubus/half-human empath, comic book-loving nerd; and, Kevin who married Evelyn Baker (they’re Antimony, Alex, and Verity’s parents). Antimony’s maternal grandparents are a cuckoo and a Revenant. Sarah, a cuckoo who’s a telepath, was adopted, and supposedly another cousin (in love with Artie). The Prices have a huge honorary family. Mindy is the Aeslin mouse sent with Antimony to infiltrate in Magic For Nothing, 6, where she met Mork. (The Aeslin mice keep an oral history of absolutely everything that happens in the Healy family.)

Lowry Entertainment, Inc., Lakeland, Florida, is…
…an amusement park rivaling Disney that was built by Michael Lowry. Monty Mule and Hilary Hinny are the premier characters for the park. Clarice does, er, did, intake interviews. Eddie is in security.

Megan and Fern are Antimony’s roommates and fellow employees. Even better, Fern Conway, a sylph, had been a fellow skater (and a blocker) on the Slasher Chicks roller derby team back in Portland. Megan (her real name is Magaere) Rodriguez is a Pliny’s gorgon and medical graduate doing her residency at the Lowryland Hospital. Cylia Mackie is captain of the Wilsonville Rose Petals, a rival derby team, as well as a personal assistant. She’s also a jink, a cryptid who can manipulate luck. Tav had been her much-loved husband. Cylia is staying at an apartment above the Lakeland Ladies warehouse. Princess Ley-you-out, a chupacabra, is one of the jammers in the league.

Sophie Vargas, the captain of Antimony’s high school cheerleading team, is now Sophie Vargas-Jackson and a vice-president at the park. Knighton. Other employees include Robin, who is the queen of mean; Cathy; Emily Doyle is one of the PR people and a routewitch; Andrea is an ambulomancer; Joshua is a trainspotter; and, Colin, a.k.a., Wand Guy, is a sorcerer who will teach Antimony.

The Spenser and Smith Family Carnival is…
…waiting it out in Indiana. Sam Taylor is a fūri, a kind of yōkai therianthrope of Chinese origin…and he looks like a monkey. And brilliant on the trapeze.

David Wilson bled out. Ginger is just a small child.

The Covenant of St George is…
…an underground organization that hates all cryptids and kills them wherever they find them. Leonard Cunningham is the heir presumptive.

Routewitches gain power from the distance they go on the road. Trainspotters are a type of routewitch who get power from trains. A cryptozoologist is a cross between a zoologist and an anthropologist who specializes in non-humans.

The cover is fireworks in fuchsia, oranges, and purples with Antimony (in a cropped tank top and blue jeans, wearing knee pads and sneakers while holding a cellphone in one hand and her beat-up skates in the other) perched on a rollercoaster rail with loops of tracks behind her. If you look carefully, you can see Sam in the distance hanging on to the tracks on the right. An info blurb at the very top with the author’s name below it is in white. The title is centered at the bottom in orange with a yellow outline, giving it a neon effect. Below the title is the series information in white.

The title is an unexpected skulduggery Antimony doesn’t expect, those Tricks for Free that she receives as does every other person coming to enjoy the park.

One response to “Book Review: Tricks for Free by Seanan McGuire”