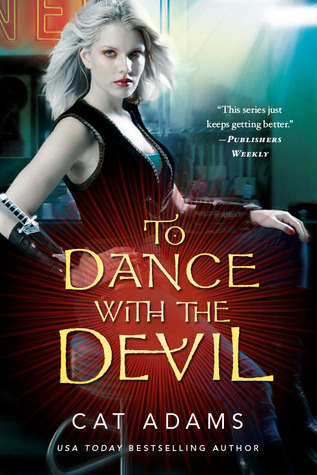 To Dance With the Devil by Cat Adams
Genres: Urban Fantasy
Published by Tor on November 5, 2013
Pages: 352
Format: Paperback
Source: the library

Celia Graves’s newest client is one of the last surviving members of a magical family that is trapped in a generations-old feud with other magic-workers. She’s supposed to die at the next full moon unless Celia can broker peace between the clans or break the curse before it can take effect.

For the first time in a long while, Celia’s personal life is looking up. Her vampire abilities seem to be under control, her Siren abilities have gotten more reliable, and even though her office was blown up, her services are more in demand than ever now that she's fought off terrorists and been part of the royal wedding of the year. Her friends all seem to be finding love and her grandmother has—finally—agreed to go to family therapy. The only trouble spot is Celia’s love life. Not long ago, she had two boyfriends.

Now she barely has one and she isn’t sure she wants him. But Bruno DeLuca is a powerful mage and Celia needs his help . . . especially after she's attacked and her client is kidnapped.

Sixth in the Blood Singer urban fantasy series and revolving around Celia Graves, a bodyguard-turned-vampire-cum-siren. Based in Santa Maria de Luna on the California coast.

My Take
Nothing like jumping in with both feet… This is a tidy-up which fell over into the un-believable arena even as Adams goes exploring into new arenas. Issues with some characters get resolved, experience change (good and bad), or stay in abeyance while new characters are introduced. Yeah, yeah, you may say that’s how stories evolve, but there’s something about this one that feels like some re-arranging behind the scenes. There’s a finality in this, a chill that didn’t draw me in as it used to.

The Creede-Bruno conflict seems to be on hold between the men, not so much with Celia. I mean, what is Bruno’s problem?? He’s getting what he wanted, and it’s not enough. What a jerk. Then there’s Dawna and her relationship problems. Luckily, Emma’s relationship problems are taken care of. The interviews for new employees? Scary. Just plain scary the quality of people available…*shakes her head, laughing silently*…

We get more detail on what happened that resulted in Ivy’s death, and Gran’s singing a new tune.

I’m assuming that these dribs and drabs about Mickey will mean something eventually. Of course, Fred may not be talking to Celia after what happened out at the lake…eek… Kevin will be a curiosity with his new position as well as his new “partner”.

There’s a lot going on, and it veers back and forth into the melodramatic. I don’t know if the melodrama wasn’t quite as effective as Adams may have intended as a great deal of this was tell. It’s particularly obvious with Isabella. After Adams has talked up how much she hates Celia, it’s still just talk. Although, I did love the jewelry moment…the “look” on Bubba’s face…

I get that Celia is good, but superwoman?

The Story
Just your average day, looking for a new office, hiring new employees, turning down clients whose killers come after you, no big deal.

Not until it turns out that the killers are connected to a super big-bad felon imprisoned in a super high-security prison from which nothing can emerge. But people will die.

Amazing what people will do for power.

The Characters
Princess Celia Graves runs Graves Personal Protection which has just undergone a forced upgrade after events in Eldritch Conspiracy, 5. Celia is part vampire and part siren, with both parts creating problems for her: the blood one is obvious. It’s the siren side that can make meetings with other females near impossible. Ivy is the ghost of Celia’s baby sister. Gran is her mother’s mother and an enabler. Until she finally sees a psychic and sees the truth. Lana Graves is her pain-in-the-butt, “blameless”, drug-addicted, alcoholic of a mother, who is imprisoned in a siren prison.

Bruno DeLuca is Matty’s brother and a mage as well as Celia’s on-again, off-again boyfriend. He’ll be teaching at the university this semester. Isabella, the Grand Hag of the East Coast, is Bruno’s mother, and she hates Celia.

Graves Personal Protection (GPP)
Dawna Han Long had been so committed to GPP that Celia offered her a partnership. Now Celia is wondering why. Chris Gaetano, Dawna’s boyfriend who works for the Company, no longer likes Celia and wants Dawna to quit. Talia Han is Dawna’s ex-military cousin. Mae is her hairdresser sister. Kevin Landingham is Emma’s brother, a werewolf, and dealing with severe PTSD. He’s also worked for the Company in black ops and tech so he could be an asset. Paulie is his assistance dog. There’s just one problem. He betrayed Celia once. Dottie is retired and a very powerful clairvoyant who does some work for Celia; Queen Lopaka says she is Celia’s personal prophet. Minnie the Mouser is her cat. She’s married to Fred, another psychic. Mickey is Fred’s scumbag son. Bubba is an old friend and a bail bondsman from the pre-exploded office days.

Emma Landingham has some psychic ability and is dating Matteo DeLuca, Bruno’s brother, a level-6 mage, and part of a militant order of mage priests in the Catholic Church. Professor Warren Landingham is their father.

Creede & Miller
John Creede had been the in-between boyfriend until he screwed up. He’s also Isaac’s apprentice. Roger Thomas and Zach Stone are C&M employees.

Abigail Andrews is a potential client; Michelle Andrews is the adopted daughter she wants protected.

Gwen Talbot is Celia’s psychiatrist and the administrator at Birchwoods, a very high-end mental health and addiction treatment facility. Katie is her receptionist. La Cocina is Celia’s favorite Mexican restaurant, family-run, and her office away from home. Barbara and Pablo run the place and take on Celia’s nutritional restrictions with glee. Isaac and Gilda Levy run a shop that specializes in magical gear: weapons, spells, and tailoring. They’re friends of Celia’s, and it turns out that Isaac is the Interim Grand Master of the West Coast and the Grand Chronicler. Roberto is Celia’s criminal defense attorney.

The sirens
Great-aunt Lopaka is also queen of the sirens; Gunnar Thorsen is her husband. Hiwahiwa is Lopaka’s assistant. Helen Baker is a member of the Siren Secret Service. Dr. Thomason is Celia’s mother’s shrink.

Queen Adriana and King Dahlmar have an interest in Celia’s life. Rob is the Company’s helicopter pilot.

Eric Zorn is the jerk assistant warden at the prison; Warden Bob Davis is much friendlier. Mage Barton is one of the prison guards. Dr. Halston is the prison doctor.

Those men who come after Abigail and Celia include Suit, a.k.a., Jack Finn, and Slugger, a.k.a., Rob Douglass.

Connor Finn and his son, Jack, are the only survivors of the Finn clan, fallout from the Finn/Garza mage family feud. Connor is in prison for his actions in the feud.

The Needle is a high-security supermax prison in the middle of Death Valley for mages, terrorists, mass murderers, and serial killers. Spawn are the children of a demon by a human. Most can shapeshift to look like anyone and are very hard to kill. The Company is a “private paramilitary company with fingers in pies all over the world”. Sirens are like mermaids with their affinity for water, but their true power lies in influencing men into doing anything they want.

The Cover
The cover is neon lights and a flaring center with Celia sandwiched between while wearing her signature knives, but not her standard blazer. Instead she’s in a leather-trimmed black vest and a turquoise tank top, wearing jeans and red nail polish.

The title refers to Connor and his ilk, for Celia and her allies will have To Dance With the Devil to survive this.