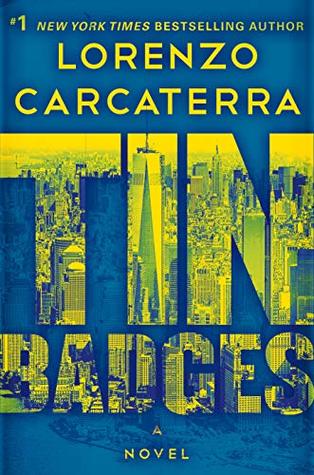 
A standalone mystery thriller novel (with series potential!) revolving around a pair of tin badges and their unusual crew of misfits.

It’s more tell than anything with a cold start, and I wish that Carcaterra had played up the tension more. As for the inciting incident, it made no sense to me. What cops are going to raid a criminal base on their own?? As for Jack and Susan, why didn’t they just turn back? And isn’t it kind of early in their relationship for Connie to be giving her family recipes to Chris?

But as I read, it got interesting: Tank’s philosophy on the job. If it ain’t hurting, it ain’t worth busting. I also think he has a point about where cops spend their off-duty time and how it contributes to family issues.

Tank has his own personal and professional conflicts going on, including taking in an orphaned nephew and how it’ll affect his long-term bachelorhood, his paralyzed partner, and a cold case handed to his team.

“There’s dirty in every business. That doesn’t mean you have to take part in it.”

With third person global subjective point-of-view, we mostly hear from Tank’s perspective, but we also hear what’s going on in the heads of a number of characters, as well as experiencing scenes with individual characters including Alexandra’s confrontation, Gonzo’s frustrations, Carmine’s encounters, Chris’ thoughts, and more.

The nephew is a piece of work, although his hostility is understandable. He is at least intelligent and vocal with his opinions and questions. I like that Tank doesn’t take on the guilt, but gives it back with honesty. It’s a conflict that spirals down to a major secret between the brothers, and Carcaterra teases us to the end with what that secret might be. Even then, it’s just a teaser.

I did crack up when Joey declared that they need a great plan, a can’t-miss plan, and then Chris looks at ’em all and says he has a plan. That long-term friendship between Tank and Connie is sweet, and Carcaterra provides some of their early history, including her dad’s, lol. As for Tar Beach, huh. Never knew it referred to those tarred roofs in the city.

Tin Badges has an interesting roster of characters and plenty of action with a good pace. Give it a chance, and you’ll enjoy it. I know I want to read more about Pearl becoming a more integral part of the team and how Chris continues to embed himself, lol.

It’s a cold case that pits Tank, Pearl, and their crew up against a dangerous drug dealer who has no problems with making it personal.

It’s not the time for Tank to be taking on a teenager, but it’s a case of step up or regret it for the rest of his life.

First Grade Detective Tommy “Tank” Rizzo ends up on a three-quarter disability/retirement. Jack “Numbers” Rizzo, an accountant, is his estranged brother, who is married to Susan. Chris is their son who loves all this CSI and detecting stuff and is a whiz on the computer. Tank and Jack’s dad had been a lugger moving boxes at the meat market. Aunt Nancy and Uncle Aldo had rented the top two floors.

First Grade Detective Frank “Pearl” Monroe is his partner and married to a first-year resident at Roosevelt Hospital. After the accident, his role is computer research.

Tank and Pearl’s crew includes…
…Bruno Madison, a bartender at Tramonti’s, a former heavyweight boxer, and the muscle of the crew. Carl Elliot is a busker, a fence, and the team’s wrangler who can get what they need. Joey Scalini is the tech guy. Alexandra Morrasa runs numbers out of Alexandra’s Psychic Healing Center with ears everywhere and better intel than the NYPD.

Tramonti’s is…
…a successful Italian restaurant/bar/jazz club — safe turf — co-owned by Carmine Tramonti, ex-Mob, and his daughter, Connie. Barry is an early-shift bartender. Vincenzo works in the kitchen. Paulie is a shooter.

New York City PD
Chief of Detectives Ray Connors is an old friend with a discretionary fund. (Ray’s dad had been a longshoreman at the old Pistol Piers run by Tough Tony Anastasia, Albert’s crazy brother.) Tony is a plainclothes detective. Technical Assistance Response Unit (TARU) is a special unit. Detective Frank Allison needs reassurance. Patrick works in Narcotics. Tomas Hidalgo had been a cop on the pad. Other corrupt cops include Frank “Zagat” Rumore and Calhoun.

Maria Martinez was an assistant DA. Leslie Stuart is also an ADA. Floyd Carter was a great cop back in the day, as well as a Tuskegee Airman, who also flew in the Cold War airlift in 1948, fought in Korea and Vietnam, won several awards, and was the first African American to earn a gold shield — and he crossed paths with Papa Calhoun.

Francine Jackson and Gloria were raped and beaten. Now they’re a cold case. Reggie, a drug runner, is their betraying neighbor. Leon Anderson and Rafael Puig had good alibis. Mano is too talkative.

Juan Marichal Gonzalez, a.k.a., Gonzo, is the biggest coke dealer in Washington Heights. Luis, Angel, JJ, the stupid-pill-taking Pedro, and Felipe and Hector have never torched a building before. Edwin didn’t make it. Albert J Burnett is a lawyer. Bono works out of New Jersey, and Gonzo owes him money.

Luther Wiley runs the Pain Train of drug dealers. The Colt Forty-fives are another gang. Mongo was moving a lot of coke a month. Nick “Baby Face” Arnold had been a Harlem drug lord. Ralph “Trouble” Jenkins is a thief whose lawyer is Wendell P Garrison. Ronnie Hidalgo had been head honcho for the Park Avenue Snipers. Mr Mike Ruffalino is in Tank’s neighborhood. Greg Bartoli is a dirty banker. Antonio Felice works at the Banco di Napoli.

Curtis, Strassman, and Randolph is…
…an accounting firm. David Randolph is Jack’s annoying boss, a department head, and a partner in the firm. His third wife, Bella, is too pretentious for words.

A tin badge is a retired detective hired on the side by the PD when they’re swamped or have too many cold cases. Cooping is a two-hour nap while on the job. Herm Williams is/was a top-tier trumpet player who funneled his earnings into a bar. Carlo and Rocco, he’s married to Frannie, are friends of Carmine’s. Marie Andrews is best friends with Susan Rizzo. The Vidocq Society was started in 1990 and is named for Eugène François Vidocq, a 19th century detective. Jimmie is a bartender in a cop bar, Alberto’s Grill.

Back in 1609
John Colman had been a member of Henry Hudson’s crew on the Half Moon.

The cover has a medium blue, slightly transparent layer over an aerial view of Manhattan with yellow windows exposing more of the city AND forming the letters for the title. All the text is yellow, and at the very top is an info blurb with the author’s name immediately below it. The title spans better than half the cover with the information that this is a novel at the very bottom.

The title is all about the protagonists, the Tin Badges who are so useful to the cops.