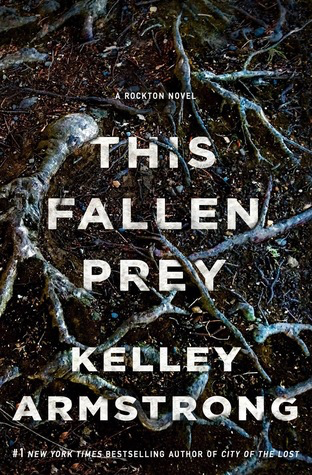 Armstrong uses a first-person protagonist point-of-view from Casey’s perspective along with present tense. Normally, I dislike present tense, but I got so absorbed… Yeah, be prepared to set the day aside for this one. Armstrong kept me on my toes and flippin’ them pages as fast as I could.

All those red herrings she kept tossing out certainly kept the “speed up”! Oh, that’s not fair. It’s not so much red herrings in the technical sense, but dang, there are all those possibilities. And considering the inhabitants of Rockton, their pasts, Oliver Brady — his stepfather — and the people who range the countryside, it could be anyone, anywhere. In too many combinations to count.

It’s something of a circus out in the woods around Rockton with people running off to escape, to hunt, to search, to kill, and I’m not surprised that Dalton and Casey are going nuts. It doesn’t help that they care, that they want to get it right, that they protect those they love.

My one main quibble is why are the townsfolk so up in arms about that gag? Lord knows with their own pasts, they shouldn’t be questioning it.

I’ll tell ya, it was not the ending I was expecting. Poetic justice for some, a terrifying future to consider, and a humdinger of a cliffhanger. And Armstrong has left us with another possibility for Rockton, for it seems the council is branching out, as is a traitor within Rockton. Nor can I forget that camping trip Casey wants to take.

An unexpected plane drop lands a dangerous criminal into Casey’s and Dalton’s laps. This isn’t what the town was designed for. There’s no plan to keep him imprisoned. Nor do they have the wherewithal to keep him safe for those six months.

Worse? The longer Oliver Brady stays in town, the more people seem to die around him. When evidence begins piling up that someone inside Rockton is working as his accomplice, Casey races to figure out who exactly Brady is and what crimes he’s truly responsible for committing.

Casey Duncan “Butler” had been a homicide detective on the outside and never expected she’d still be one in Rockton. Nor did she expect to finally find herself. Storm is her Newfoundland puppy who is being trained as a tracking dog. April is her detached sister, a neuroscientist who prefers research.

Eric Dalton is the sheriff, Casey’s boss, and her lover. He was “rescued” as a child and adopted by Sheriff Gene Dalton and his wife. His younger brother, Jacob, was left behind.

Rockton, Ontario, is…
…an off-the-grid, isolated community built as a haven for people running from their pasts who buy their way in, and they are required to stay for two years and may stay for five. There are no cell phones, no internet, no mail, and no way of getting in or out without the town council’s approval.

Deputy Will Anders is a former soldier. Kenny, a high school math teacher, is a trusted part of the team, but his time is up; Nicole; Jen is still a bitch; Sam; and, Paul are all part of the militia.

Mathias is the butcher who prefers to communicate in French; he was a psychiatrist on the outside. Petra works part-time at the general store and is an artist and friend who babysits Storm. Diana is Casey’s ex-friend. Isabel Radcliffe, a former psychologist, runs the local brothel and bar, the Roc, controls the liquor in town, and has a network of information gatherers. Brian runs the bakery and is the best source of town gossip. Roy is a troublemaking new resident. Cecil sides with Roy. Sharon has died. Artie is a hopeful client. Val is the council representative who’s finally coming out of her shell.

The council…
…exists in the outside world, making money off their hidden-away project. Phil is a council member from the outside who communicates with Rockton.

The First Settlement consists of…
…people who left Rockton, hating the police state it had become, and they have devolved. Edwin is their leader, a former lawyer. Harper is a young girl on a hunting trip with her father, Nonna (her grandmother), and brother, Albie.

Tyrone Cypher, a former hit man, is the former sheriff who now lives off the land. Freckles is a wolf who gave birth. Brent is a slightly bipolar hermit who lives in a cave and trades with the town. Maryanne was a biologist who left Rockton…and has really devolved, taken by hostiles. Hostiles are people turned animalistic, even more devolved than the settlers.

Blaine had been Casey’s drug-dealing boyfriend.

At first glance, the cover seems like a picture of the galaxy with all that blackness and that rainbow of multi-sized, multi-colored flecks until you look at the monstrous form in that sky…and it turns out to be a straight-up view from the ground looking up at a night sky through the gnarly limbs of a tree. Just below the top of the cover is a tiny bit of font with the series information (when did Armstrong switch from the Casey Duncan name for the series??). Immediately below is the the title and the author’s name in a sans-serif font in a mangy sort of white, tree branches and twigs crossing over the letters.

The title presages events, This Fallen Prey that has so many tales of innocence from so many characters.

6 responses to “Book Review: This Fallen Prey by Kelley Armstrong”