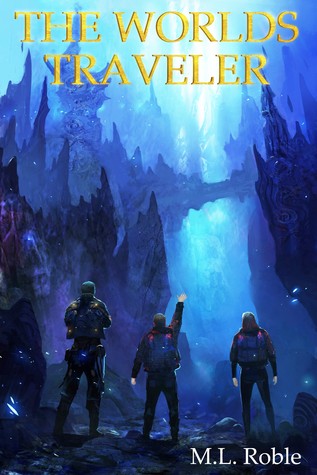 For fourteen-year-old Phillip, it has meant having to stay hidden, unable to use his gift of moving through maps to search for his missing father. But the arrival of a stranger named Delroy brings unexpected opportunity, for Delroy is a man with the ability to travel worlds hidden within our own and he was sent by Phillip's father. Now Phillip will do everything he can to find his dad, even if it means tricking Delroy into helping him or a quest through those hidden worlds.

Even if leaving home means Martin can now find him...

This is actually the second in what I’m calling the “Phillip and Natalie” fantasy series for middle-grade readers, and in this one, The Worlds Traveler focuses on Delroy Mendu, a mercenary. I do wish Roble had indicated on the cover that this is part of a series.

This ARC was sent to me by NetGalley and the author for an honest review.

Mmm, The Worlds Traveler starts out poorly with too much vagueness and too much of the author trying to impress her readers, but then I either got sucked into the story (at last) or Roble eased up. I’m still not sure which. You may want to start with The Magician’s Doll, as I suspect it could give more background information that will make this story’s opening clearer

I know, I know. A basic premise is for an author to intrigue the reader from the very first paragraph, and that first paragraph irritated me. I mean, how could Phillip not know it was raining? A few paragraphs later and Roble barely drops another hint which didn’t make sense. And a few paragraphs later…the same thing with those hours. I never did figure out when they were. It all does make sense later, but it left me annoyed at the author. Not a good mindframe for me.

Roble has the makings of a good story, and she needs to work on it some more. There’s an unevenness and a definite lack of flow, consistency, and show, as Roble tells her way through the story. I did enjoy the idea of it, but I never did get pulled into her characters or their conflicts. Hmmm, I take that back. I did get really annoyed with Phillip and Natalie at different times.

Why doesn’t Phillip use his gift in the Mackenzie’s Tomb? What’s with referring to their mothers by their first names? Phillip is about to get chewed out by Mrs. Stone?? Why not just say Mom? I can see why Phillip would call Natalie’s grandmother Mrs. Blaine, but why doesn’t Natalie ever refer to her as grandma, granny, or grandmother???

Phillip keeps referring to their families having to be prepared to pack up and run, as though they’ve been on the run from town to town for some time, and Roble proceeds to demolish that idea. There’s a lack of consistency that pops up throughout that simply adds to my irritation. That initial revelation in the Shadow World in which Phillip LEAPS to the conclusion Roble explains later was another irritation. It made me stop reading and go back, sure I had missed something. I didn’t find it on my initial reading…nor did I find it when I was going through my notes. When Roble tells the tale of the blind man, she first says that he lives in the area and then she has him staying at the inn, where the owner is kind enough to let him stay when he’s cured. If he lives in the area, wouldn’t he know the owner? The owner seems to know him. Maybe.

O-o-o-kay, and now the tropes come out. Oy. I must sacrifice myself to save my mommy. Over and over. Roble had done reasonably well in avoiding the worst of the tropes, but this drove me up and over. Yes, I’m including the amulet incident. Why Phillip doesn’t just break the dang thing, I’ll never understand. Yes, yes, I’m sure Roble’s intent was to provide a reason for book 3, and that scene needed more finesse in why it couldn’t be done. Just because it’s fantasy, doesn’t mean that cause-and-effect can’t be realistic.

Roble does well in portraying Phillip as the very impatient young man, fed up with adults who don’t give him any freedom, who wrap him up in cotton wool, when he’s itching to get out and do. It’s a nice parallel with Delroy’s own past, ahem, itchiness, lol.

It was Aerthreis that hooked me. I loved Roble’s description of the cloud people and their personalities. Their worries and concerns. Roble’s blend of what clouds look like and how Phillip and Natalie changed their shapes to fit in. How excited Phillip was at being a cloud and whooshing through the sky. It made me want to be there!

Whoa, Phillip and Natalie are quite mature about who is truly to blame for the horrible things that happen. If only more people were able to see that truth…and yes, I’m including myself in the mix of those who need to work on that one! Phillip is also amazingly accepting of Delroy’s suggestion that he work to learn about his new gift. Not what I was expecting when Phillip keeps being so obnoxious about going hunting. Although, I do suspect he’d never have accepted the information his mother has been holding back.

Roble was quite natural in how she sent our hunting trio into the different worlds. That camping trip sounded like fun while the trees in the Forests of Tasdima sound amazing. It made me think of Mercedes Lackey’s Valdemar stories, the ones involving the Tayledras and their Vales. I also liked Roble’s story of the gifted ones’ possible origin. Nicely introduced and played.

This is definitely a middle-grade reader story which younger kids will enjoy, based on how the characters are acting and responding. Parents do not need to worry about bad influences in this.

For fourteen-year-old Phillip, it has meant having to stay hidden, unable to use his gift to search for his missing father. But the arrival of a stranger brings unexpected opportunity, for Delroy is a man with the ability to travel worlds hidden within our own, and he was sent by Phillip’s father. Now Phillip will do everything he can to find his dad, even if it means tricking Delroy into helping him on a quest through those hidden worlds.

Even if leaving home means Martin can now find him…

Phillip Stone is fourteen years old with a gift of dissolving into his map and appearing in that location. He’s best (and only) friends with the thirteen-year-old Natalie Bristol who has her own gifts of enhancing and borrowing others’ gifts, “seeing” future possibilities, and others that are hinted at. Janet Stone is Phillip’s mother with a gift for sewing protections. Jack Stone is his missing father with a gift for pulling real objects out of drawings or paintings. Serena Bristol is Natalie’s mother with a gift for mind tricks; Mrs. Blaine is Nat’s grandmother who can twist reality as well as do mind tricks. Beausoleil was a magician with a traveling circus who can make the inanimate animate (The Magician’s Doll, 1); now he’s hooked up with the Stones and Bristols.

Delroy Mendu was another like Phillip, antsy to explore, do, and acquire knowledge with a gift for seeing and traveling to other worlds. He’s learned his lesson, and now he’s unwanted in more than one world. Teresa is the wife with healing gifts who left him and took their son, Samuel.

Aerthreis is…
…up in the sky where the cloud people live. Azrue seems to be the leader. Pothren is much more nervous. Guitle is an anomaly amongst the clouds. She seeks knowledge everywhere, even when it hurts. An Omphalos is a cloud park, a temporary place for fun.

The Shadow World is…
…a world where the dead wait as they decide whether they want to continue on or not. Pausidio had been one of Jack’s partners in their battle against the Reimers. He has an interesting theory I hope will work.

Gapea is…
…a world where the Traucree, who are gentle, patient giants with lots of eyes, live. They’re not so gentle if a Reimer gets ahold of them.

The Forests of Tasdima will…
…decide if they will allow you to enter. Or not. Ullbipt is a tracker, and sounds like a roly-poly centipede (Roble does an excellent job of making him sound lovable!); Pluro is his cousin. Sharloc appears to be their leader while Revena seems to be a blend of archivist and seer. Elmus Baltro is Revena’s protégé with the same need to be moving and doing as Phillip. Ger was leading a scout party that was attacked. Khimon had been part of the party. The Seat records all that happens in our and their worlds that it deems important.

Rasper Tolivo tells the tale of the blind man and Arlea, the gifted one the young man seeks.

Martin and Sebastian Reimer, father and son, respectively, are power mad, gathering up all the gifts they can take, so they can rule the world. They’ll stop at nothing. Natalie is Sebastian’s daughter and Martin’s granddaughter.

The Coffeys took just that smidge too long to accept what Jack was saying.

The cover is brilliant in its blues amidst the craggy spires of the Shadow World. It’s Delroy, Phillip, and Natalie standing with their backs to us as they look towards the glowing blue of the arriving dead.

The title is specific to Delroy Mendu, The Worlds Traveler, whose gift allows him to see so much more.

6 responses to “Book Review: The Worlds Traveler by M.L. Roble”