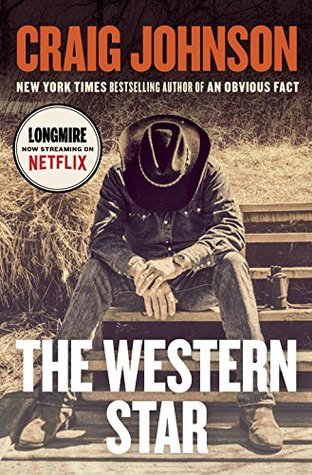 Also by this author: Spirit of Steamboat, A Serpent's Tooth, Any Other Name, The Highwayman, "Eleven/Twenty-Nine", An Obvious Fact, Depth of Winter, Land of Wolves, The Cold Dish, Death Without Company , Kindness Goes Unpunished , Another Man's Moccasins, "Land of the Blind", The Percentages"

Thirteenth in the Walt Longmire mystery series set in Wyoming and revolving around the sheriff of Absaroka County, his family, and his friends. If you’re interested, there is a chronological listing of the Walt Longmire books on my website.

It takes a bit to get used to Johnson leaping back and forth from the present to the past, but it’s easy enough once you get the hang of it. It’s a very nice segue into the past, and as the story goes on, Johnson gets to burning you up with wanting to know who that sick prisoner is.

I’ll tell ya now. I was completely WRONG. Johnson took me by surprise with that reveal. I don’t feel bad about it, as Johnson wasn’t dropping hardly any of the hints that Walt was picking up. As for the ending, frickin’ frackin’ cliffhangers!! It’s also the only spot in the book where the metaphysical rejoins us. We do at least find out why Walt is so gung-ho to keep this prisoner in jail.

It’s a trip into the past where Walt has been a deputy for two weeks, and it does a somewhat lopsided parallel with events in the now. Johnson uses a first person protagonist point-of-view, so it’s only Walt’s perspective that we get.

The main conflict is whether Walt stays a cop. It’s not what he envisioned doing, and life is further complicated by Martha being so angry with him. Yet, he does have good reasons for taking this job. Well, besides the obvious. It’s a paycheck when you’re broke. Still, she sure does have lousy timing. Naturally, there are a number of other conflicts, varying in intensity with lots of red herrings. Lots and lots of ‘em. One of those is a pretty big loose thread that Leeland brought up.

“This Train” is but one of the many train metaphors about life and the journey you must take through it.

I can see Carol Fisk’s point about the economics, but this is where my stance turns slightly to the right of Attila the Hun. I’m with Walt when he says they’re sentenced to life in prison, so they should stay there. Now if Mrs. Fisk wants to save money, I say shoot ‘em.

What is it with crooks who blame everyone but themselves???

Well before 1972, Melanie Wheeler was on a date with Ed AND John? At the same time? Kinky.

An old photograph combined with his routine trek to the capital for a psychotic prisoner’s parole hearing sends Walt hurtling back to the past, reliving the start of a new job and a new marriage.

It’s a past that will connect with Walt’s present and place him and everyone he cares about squarely on the tracks of runaway revenge.

Sheriff Walt Longmire, a Marine lieutenant and detective in Vietnam, has been a widower for a long time. Dog would have fit in with the Pleistocene period. Undersheriff Vic Moretti is his current second-in-command and love interest. Henry Standing Bear, a.k.a., the Cheyenne Mountain, has been Walt’s best friend since grade school. Lucien Connelly is the retired, one-legged Absaroka County sheriff who had hired Walt.

Cady Longmire, a.k.a., the Greatest Legal Mind of Our Time, is a lawyer who moved back to Wyoming to work for Joe Meyer, the Wyoming Attorney General. Lola is her young daughter. Alexia Mendez is Lola’s nanny. Ricardo is her nephew. David Coulter is a musician and a friend of Ricardo’s. Peter Lowery is a homeless guy who lives outside Cady’s and Joe’s houses.

Douglas, Wyoming
Sheriff Joe Iron Cloud is at the range. Steve Wolf is the Wyoming Law Enforcement Academy’s range manager. The LaBone Hotel is the watering hole for the old-school law enforcement.

Cheyenne, Wyoming
Stu Healy has been the presiding judge over the parole hearings for years. Snowden is taking his place this time. Dick Davis is a court-appointed attorney. Libby Troon operates Liberty Bail Bonds. Officer Keith is guarding the prisoner in the hospital. Dr. Howe is the general physician at the prison while Dr. Robertson follows up on more serious problems. T.J. Sherwin is the head of the lab for the Wyoming Department of Criminal Investigation. Officer Nico Severini lends credibility. FBI Agent Mike McGroder is hunting down background information.

Wally Fisk is the governor of Wyoming and his wife, Carol, is his partner. The Bobs — Bob Delude and Robert Hall — are their drivers and bodyguards. Mark Rivera is Carol’s press secretary.

Abarrane Extepare is an old Basque rancher who may be setting up a kidnapping of his great-grandson. Abigail Leeland Delahunt was Marv Leeland’s daughter; Pam Delahunt is her daughter.

Tomás Bidarte is a VERY bad man who wants Walt to suffer (A Serpent’s Tooth, 9). He’s got a fight on with Miguel Morales, a Mexican drug lord. The Asociación Punto Muerto is the Dead Center Association, an unofficial union of assassins.

…known as the sheriffs’ train for their annual association junket to Evanston. Lucien became president of the Wyoming Sheriffs’ Association that year. Other sheriffs on the train include Wally Finlay in Niobrara County; Bo Brown in Natrona County; George McKay in Laramie; Marv Leeland in Uinta County and current president of the Wyoming Sheriffs’ Association; Anson Tillman in Sheridan County; Bill Wiltse in Fremont County; Wayne Hanna in Sublette; Sundown Nolan in Campbell (a nickname for bad happenings by sundown); Otis Phelps from Platte; Bruce Eldredge in Park; and, John Schafer — and dang if they aren’t the hittin’est bunch!

Mr. Meade Lux Gibbs is the head chef aboard the train; he’s picked up some recipes from Monsieur Henri Lafontaine. Joe Holland is train security. John Saunders is the engineer; Rich Roback is the fireman. Kim LeClerc is a singer who is partnering up with McKay for the trip.

Walt Longmire and Martha Pierson have been married for four months (her parents are Jack and Mildred), and she’s pregnant. Henry is in France with a ladyfriend.

Leon is the spooked driver for Grace’s touring bus. Abel was a young man who was shot and dumped. Ludlow Coontz is a big, dumb-lookin’ bulldogger. Pixly is just one of a number of “victims”. Real victims include Melanie Wheeler, Pauline Davenport, Lisa Pell, Francine Harrison, and Elaine Lenz.

The Wyoming State Insane Asylum is…
…in Evanston. Ed Schafer, John’s convict brother, has been transferred here. Annie Welsh is another prisoner there. Some of the guards include Brian and Bernard “Barnyard”.

Interesting tidbit about Owen Wister and his book, The Virginian: A Horseman of the Plains and what it did for western novels.

The cover is a range of browns and reminds me of an aged photograph with those yellow tones. It’s a workshirt-wearing Walt sitting on an old wooden slatted bench in front of a mountain of hay, his jean-clad legs ending in dusty boots, legs spread wide, his elbows resting on his knees, hands clasped, a black cowboy hat with a silver band on the head tilted downward. It’s a pose of either repose or just plain worn out. The author’s name is centered across the top in an orangish-red with an info blurb below it in white. A round sticker just below that on the left proclaims that the television series based on this series is now on Netflix. The title is in white and spans Walt’s lower legs.

The title is named after the sheriffs’ train that ran from 1948 to 1972, The Western Star.

2 responses to “Book Review: The Western Star by Craig Johnson”