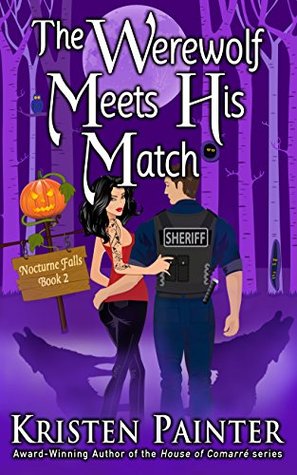 Second in the Nocturne Falls magical realism fantasy series and revolving around a town that celebrates Halloween 365 days a year. It’s so much easier for the supes to blend in! The couple focus is on Ivy Kincaid and Hank Merrow.

Too funny and so sweet. It has all the potential for a disaster in this arranged marriage between enemy packs, yet Painter does the cozy too well. Yes, it’s a bit sappy with how supportive Hank is. And that Birdie, lol. She just goes all in, driving Ivy crazy.

It’s where Ivy learns the difference between a modern pack and her own. I’d prefer the new one as well. It does take Ivy awhile to figure out that difference, and it’s the action that persuades her that it’s true. A subtle humor has Ivy expecting a justice of the peace wedding while Birdie has her own plans, and the contrasting plans just keep a’comin’.

We get to hear Ivy’s and Hank’s thoughts and feel their emotions because Painter uses third person dual protagonist point-of-view from Ivy’s and Hank’s perspectives. Right from the wolfies’ brains.

Dang, I do love Nocturne Falls; it sounds so perfect. The Ellinghams keep making deals that people can’t turn down…and I mean this in a good way.

Hmmm, turns out that there’s an enchanted spring, and the town bottles the water to sell to tourists. It helps, ahem, sell the fantasy of Nocturne Falls. Huh.

I do love that the last laugh is on Evil Daddy!

The Merrows know it’s a trick, but they’re honor bound to follow through on this arranged marriage. It is what Hank has expected all this time. It’s what he’s trained for.

Although…neither he nor his parents were expecting this proposal!

Nor were they expecting the secrets Ivy holds, secrets that could destroy everything Hank holds dear…including his newfound love for her.

Motorcycle mama Ivy “Poison” Kincaid, a hairstylist werewolf, is the sacrifice on the altar, mostly because it’ll hurt her and make her Neanderthal dad, the criminal alpha of the male-only Tennessee pack, Clemens Kincaid, happy about it. Patsy Kincaid is his much abused wife. Sam is Ivy’s younger brother who is being swayed to the dark side. Charlie is Ivy’s seven-year-old son. Daryl is Ivy’s second oldest brother. Harlan Kincaid was Ivy’s paternal grandfather, the one from whom Clemens learned all this nasty behavior. The brothers, Dalton and Wade Jenkins, are distant relatives who don’t appear to be too bright.

Hank Merrow, a werewolf, is the sheriff for Nocturne Falls; he had been a Ranger in the army. His deputies include Blythe, a Valkyrie, and Alex Cruz, a panther shifter. He has another four deputies on the nightshift and five reserves. Aunt Birdie Caruthers is the Merrows’ widowed aunt (Uncle John had been her husband) and the police receptionist. Griffin Merrow is their dad and the alpha of their Georgia pack; Belinda is their mother. Titus Merrow is Hank and Bridget’s brother and the fire chief who’s in love with Zoe. It was his accident that created the debt. Bridget Merrow, a werewolf and Hank and Titus’ sister, runs Howler’s, a popular dive bar.

Nocturne Falls is…
…a great place to be yourself. Most of the town is owned by the Ellinghams, a vampire family with Elenore Ellingham the matriarch. Alice Bishop is a strong witch and companion to Elenore. Sebastian is the oldest son; his wife, Evangeline, ran off. Hugh is the second son, and he’s recently married Delaney James (The Vampire’s Mail Order Bride, 1) who has a sweets store, Delaney’s Delectables, on Black Cat Boulevard.

Marigold Williams, the florist at Enchanted Garden, is one of Corette’s three daughters, all four are witches. Saffron is Marigold’s seven-year-old daughter. Corette runs Ever After, a bridal boutique, and she’s dating Stanhill, Hugh’s rook. Willa Iscove is a fae jeweler with a shop, Illusions. Nick Hardwin is a gargoyle who had served in the Rangers with Hank. Ivan “Van” Tsvetkov is a dragon shifter who’s part of the MMA fight circuit.

Jimmy Philips is a woman-beating jerk. Sandra is the partner who can’t seem to get away. Eric Prescott is Charlie’s betraying father. Eric’s uncle, William Hayden, is the alpha of the Alabama pack. US Attorney Janet Fry would love to put Clemens Kincaid away.

The background of the cover is a range of purples in the sky, the full moon, the tree trunks on either side, the ground…and the wolf shadows angling away from Ivy and Hank. Color comes from the lit-up jack-o-lantern on the left just above the brown wooden sign with the series info on it in a pale yellow. It’s a red tanktop-and-black-jeans-clad Ivy with her long black hair and tattooed arm with one hand reaching out to the sheriff in his deep blue uniform and dark green work vest with “sheriff” labeled across his back…he’s got an arm resting on Ivy’s hip…and…lower. The title is at the very top and touching down onto their heads while the author’s name taps their ankles. Both are in white with thick black outline. There’s an info blurb at the very bottom in that pale yellow with a shadow.

The title is too true, for The Werewolf Meets His Match and more.