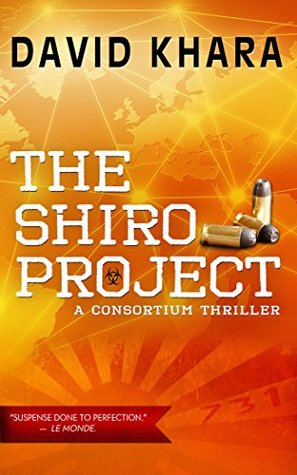 When yesterday's enemies become today's best allies, and when mankind seems on the verge of repeating the errors of the past, what can a lone man do against the madness that is bound to follow?

After his mentor is kidnapped, a Mossad agent must team up with his worst foe, but first must face himself. He is enlisted against his will in a fight that is not his own and takes him from present-day Czech Republic to past Manchuria. He has to put an end to the activities of a mysterious group who have gotten their hands on weapons of mass destruction.

What do Japanese war camps, US Army research and an annihilated modern-day Czech village all have in common?"

Also by this author: The Morgenstern Project

Second in the Consortium spy thriller series revolving around the superhuman Eytan and set in 2010 very shortly after The Bleiberg Project, 1.

It’s a hostage situation that will have you going with more twists and turns than you can imagine. Nor does Khara hold back on the horror as he visits the hideous experimentations performed by the Japanese during World War II. At one point, Khara “quotes” one of his characters, a German concentration camp doctor, saying “compared to the Japanese, we were choirboys.” And then you read that Ishii got immunity for the things he did. From the American government. Even though I know it happened then — and likely still happens today — it still horrifies and stupefies me that people can treat others like this. That people will condone it even if it is after the fact.

Do pay attention to the epigraphs as they keep you informed of the date and location of events in that chapter. Khara does jump back and forth a lot, time-wise, and as long as you pay attention, you’ll be fine.

There’s a prologue set in 1957 of a research division at an army base. I only regret one death there.

I have to say that I found The Shiro Project disappointing. It doesn’t live up to The Bleiberg Project. It’s still a good story, but there’s a clunkiness in this, and Khara is too obvious in places. I also suspect that part of my disappointment is the jump Khara made in this story to focus on Eytan. It was unexpected. I know, it’s a lousy reason to be disappointed, but there was so much more drama and tension in The Bleiberg Project, and I was anticipating more of this.

Don’t get me wrong. I do adore Eytan. He has such principles and such a devotion to protecting, it’ll make you cry. And lord knows, Khara does make my heart race, but there’s a heart missing in this. Yes, I do appreciate Eytan possibly falling in love, but that’s not the heart about which I’m thinking. It’s more of an emotional warmth. Maybe if Khara had played up Eli’s “detainment” and a possible danger to Rose?

I did love Lafner’s plans for that coffee machine, lol. And breathed a major sigh of relief when she falls unconscious. Jesus. Khara had my heart rate up and racing like mad. I also liked Eytan’s assessment of Elena’s feelings of superiority. All the strength in the world doesn’t make up for practice or focus. I also like that Eytan’s friendliness drives Elena nuts, lol.

What Sean says about our world of today being more interested in sensationalism, ready to exclaim over each horrible incident, but not interested enough to do anything about it rings true, I’m sad to say.

It’s a secret revealed to a nosy journalist who can’t resist creeping in with his camera. It’s a secret he may not have a chance to publish when he’s caught by Czech special forces.

Pure luck for Branislav when Eytan shows up, and a good contact for Eytan to have as it turns out.

Branislav Poborsky is a journalist whose marriage is foundering. Lucie, his wife, is a television makeup artist. His father, Vladek Poborsky, is retired from his job as a production director at the Paramo factory, but now consults. Svetlana is the receptionist at the paper. Former rock guitarist, Venceslas, runs the café across from the newspaper office. “Uncle” Ivan was one of the victims in the village.

2010
Eytan Morg, formerly Morgenstern, a.k.a., 302, a Kidon agent for Mossad, was genetically modified in the 1940s by SS medics. He needs a top-secret serum to stay alive, has superior physical capabilities, and does not age.

Eli Karman is a hotshot in charge of Mossad’s archives and is friends with Eytan. His daughter, Rose, lives in Boston with her husband, Steve, and they’re about to have a baby. The Kidon is Mossad’s terrorist-abduction and execution unit. Dr. Avi Lafner is a Mossad medical supervisor who does the quarterly checkups of special agents. Eytan considers him his closest true friend.

1953, Middle of the Mediterranean Sea finds…
…a shipload of Jews emigrating to the new Israel, and the passengers include Eytan who will miss his friend, Winston Churchill. Frank is one of the many orphans. Eli Karman is one of them, and he may be too weak to survive.

1955
Hanne is a nurse. Andreï Kourilyenko, an employee of the Consortium, is struggling with the ALS his daughter, Elena, is suffering.

1943 – 1945, Research Center Unit 731, Harbin, Manchuria, is…
…concerned with issues of water purification and the prevention of contagious diseases. Dr. Hirokazu Shinje is proud to be a part of the research but hates the regimen. Lieutenant General Shiro Ishii is in charge and is totally nuts. The Kempeitai are the Imperial Army’s military police.

1946
Iyona is a nurse Hirokazu started seeing but decided against marrying because of his activities in Manchuria. General Tōjō Hideki is denounced as a war criminal.

1947
Peter Aikman is heading the meeting to confirm Ishii’s immunity contract with the disabled, scheming Elliot Garnikel who has a way with the ladies, Simon Dickel who is a member of MacArthur’s staff, and Colonel Nagoshi who is a war criminal who wants to rebuild his country.

2010
Shinje Corporation, founded in 1949 by Dr. Hirokazu Shinje, is ordering the types of materials and supplies needed by a P4 lab. In the 1960s, he created a charitable foundation, the Shinje Foundation Children’s Summer Camp. Part of their mission is to provide children with medical and educational assistance. His successor is his assistant, Sean Woodridge.

The Children of Shiro is an organization for those abused by various governments in the past 50 years.

Oleg Kerzhakov is with Russia’s intelligence agency and had been one of the responders at the 2010 Moscow Metro suicide bombing. He now oversees security at the FSB headquarters.

Captain James O’Barr runs a marine shuttle in Ireland. Bart is his German shepherd. Old Kelly Cahill is losing his marbles. Ann is Eytan’s neighbor who keeps an eye on his place and stocks it when she knows he’s coming. They share an interest in painting.

Ryan Martin is a huge, in every respect, computer engineer being used to prep us for The Morgenstern Project.

Dr. Philip Neville is an English chemist who loves fifties music. Professor Jane Woodridge tolerates his rule-bending at the US Army Medical Research Institute for Infectious Diseases. She has a son, Sean.

…an organization that “helped fund Hitler’s rise to power” and intends to “advance the human race regardless of cost or ethics.” It’s public face is BCI. Herr Doktor Viktor Bleiberg is the scientist who created Eytan (The Bleiberg Project). Jenkins is a power-hungry little twerp, and I love what Eytan does to him! Cypher is the boss who needed a lesson taught to Jenkins. He’s also the man who initiated the kidnapping.

Elena is like Eytan, only more advanced, psychopathic, and does the Consortium’s dirty work. We first met her in The Bleiberg Project.

A P4 lab, a.k.a., BSL4 or biosafety level 4 facilities, are very strict and secure laboratories that “handle the most exotic and hazardous biological agents”.

The background of the cover is a gradation of yellow to orange shading a map of the world. Bright yellow lines connect many of the places the story jumps to. In the foreground are three bullets to the right of the title.

The title is The Shiro Project, named for the nutjob in charge of the Manchurian research center, which sets off events. 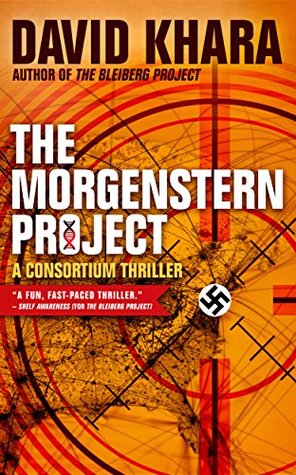