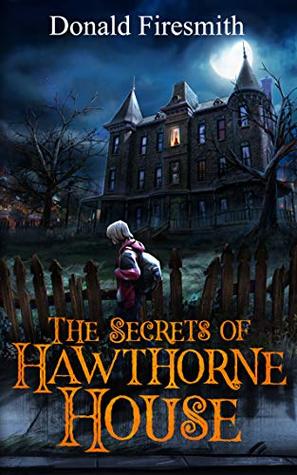 
A standalone paranormal fantasy novel for Young Adult readers and revolving around a pair of unlikely friends who have both recently moved to Hawthorne, Indiana. I wouldn’t mind seeing this as a series…

For the first couple of paragraphs I dove in with delight, and then slowed. Firesmith was way too descriptive. Incredibly wordy! And then I slid all the way in, enjoying The Secrets of Hawthorne House with its focus on faith. And I did like Gerallt’s explanation of magic!

I loved that the boys stood up to the bullies and the loyalty of each of them to the other. The costuming and lifestyle of the Hawthornes was fascinating. I did have to wonder why it was still necessary for the candles and all, but it was a pip. And I certainly got hungry reading of Vivianne’s and Gwendolyn’s cooking!

It’s not just the bullying, but the nasty gossip that destroys people, which runs with a subtheme about ignorance and bigotry. Then there’s that contrast between Matt’s and Gerallt’s lifestyles that provides yet more interest, and with Firesmith using third person point-of-view, we get an impersonal perspective from all sides.

A few niggles. Why would Sam think he’d actually be able to cut it as a computer programmer? I’m not too keen on Matt’s self entitlement. The “accent” was annoying, and yet I do understand why Firesmith made use of it. Then there’s Matt taking everyone out to dinner when he claims they’re so broke.

What’s with the bullies? How can teachers not know who the bullies are? It is unacceptable that these creeps are allowed to get away with it! As for their parents!?! WTF?? This is part of the problem with parents, that they refuse to listen to their children’s side of things. That they simply believe whatever the other side, the teachers, tell them without understanding that there are always two sides to any issue. What an incredible disservice to their own children! Oh, sure, I can believe that a parent who truly knows their child is bad would believe the teacher over their child, but these parents??? When they’ve never had trouble with them before?? No.

There’s plenty of conflict: the bullies, the familial losses, the money issues of all three, religious and cultural differences, fears about witches and their craft, science versus faith, and those idiotic school employees who believe they can diagnose psychological issues.

Nor is the action lacking. I’ve already mentioned the bullies, and there’s also the assault, the treasure hunt, and Matt’s arrogance.

Life is forever changed when Matt’s mother is killed, and their father uproots them from everything they know.

But Matt’s life will change forever when a family of druids moves into the dilapidated Victorian mansion next door.

Fifteen-year-old Matt Mitchell is more nerd than his popular twin sister, Tina. Their dad, Sam, taught intro to programming back at Port Orford High School. Midnight is the family cat. Their artist mother was killed by a drunk driver back in Port Orford, Oregon. Uncle James.

The Hawthorne House
Vivianne Hawthorne Carter, a.k.a., Old Lady Hawthorne, has been a recluse for decades. She’s the daughter of Henry and Rhiannon. Vivianne had married John Carter who ran off with Mary Collins, Vivianne’s best friend. Gwendolyn Hawthorne is Vivianne’s niece whose fisherman husband, Medwyn, died. Her children — Gwyneth, Gerallt, and Gareth — and her accepted Vivianne’s invitation. Nightshade and Belladonna are the family cats. Nightwing is Gerallt’s crow. Shadow is Gareth’s squirrel.

Ezekiel Hawthorne founded the town of Hawthorne in 1826. Harold was his son who worked hard to increase the family fortune and founded the Northern Indiana Railroad Company. Henry Hubertus Hawthorne was Harold’s son who married Rhiannon Llewellyn from Deer Isle. Their children were Morgan and Vivianne.

Hawthorne High School
Fellow students include the much picked-upon Sarah Duffy who runs the A/V; Harper, and Paul Stephens who had also lost his mother to a car accident. Clayton Cartwright, Dylan Jones, and Colin O’Connell are bullies. Brad O’Connell is one of Colin’s cousins, and his nastiness seems to run int he family.

Marcus Thompson is the American History teacher interested in the why, Tanner is the principal, Mrs Fletcher is at the principal’s front desk, Mrs McKinney teaches English, and Mr Armstrong is the gym teacher.

Modron is the great mother goddess the Hawthornes worship. The High Coven is the ruling body of all druids. George Smith is a scumbag of a handyman. Peter Henderson of Peter’s Pawn Shop isn’t too picky.

The cover is DARK with a cloudy yet bright deep blue sky and a full moon. The background is a dilapidated Victorian mansion with turrets on either end and a light burning in an upper window. A bare tree is to the house’s left. A broken down fence separates the house from a young boy, carrying a backpack, trudging past the house on a broken sidewalk. The author’s name is at the top in white. The title is in a fun gothic font in shades of yellow and orange.

The title is what it’s all about, The Secrets of Hawthorne House.

4 responses to “Book Review: The Secrets of Hawthorne House by Donald Firesmith”