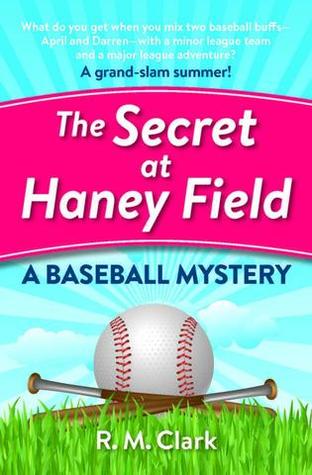 Twelve-year-old April O'Day's summer has gotten off to a flying start. As the new bat retriever for the Harpoons, her hometown's minor league team, she's fetching bats and doling out great advice to players and coaches alike. In a word, she's becoming indispensable. But mysterious things are happening at Haney Field, which April and her best friend - and fellow baseball enthusiast - Darren Plummer are determined to uncover. As they quickly learn, this is no ordinary season. In fact, it's a whole new ball game.

A middle-reader’s baseball mystery that looks back over history and bigotry and rights a tremendous wrong. The story takes place in New Blackburn, Massachusetts.

This ARC was provided by NetGalley and MB Publishing in exchange for an honest review.

My Take
I can certainly understand why April won! An essay on using sabermetrics! This is a fun angle, reading the strategies and tricks of reading a baseball field. April knows her stats about the players and pays attention to the tiny details. It’s a great read and very encouraging for kids. I love how the players pay attention to her, respect her. Not to worry, though, she’s still a kid with the mischief that kids get up to. It’s just a little more focused than most, lol.

My only big quibble is that the players tolerate April’s advice at the start. She’s just a kid, they don’t know her, and adults don’t normally see kids as experts. I wish Clark had given us a reason why they’re accepting it. Same goes for Haney. He’s gotta be desperate if knowing a twelve-year-old seeing the same thing he is makes him feel better!

It’s not ’til well into the story that we learn what the mystery is, and it’s a sad state for where we were as a country. We’ve made progress down the years, but we’re still a work-in-progress. I think that old scoreboard is Haney’s dirty secret. A guilt trip he hides but wants to ease up on.

“It’s sad that we have to create laws to make people do the right thing.”

Mr. Haney is terrified that he’s losing his mind, and it’s a big part of his dirty secret. Being a kid, April has already been exploring the grounds, and she’s seen the same shadows he has and has more questions. She’ll have even more once she “time travels” and investigates deeper. She does some nice work detecting along with unexpected help from her dad.

There’s a short bit on the expectations when Jackie Robinson made it into the big leagues, and the disappointment that followed. There’s also a useful glossary at the start for those of us not in the know about baseball terms *points finger at self — although I was surprised at how much I did know*.

This is a great cozy read with some great characters and several heck-of-a-twisty endings. Two of the characters have their come-to-Jesus moments and Clark brings them right in the end. You won’t regret this for your kids! Heck, I don’t even like baseball, and I loved this!

The Story
April has just won an essay contest that will allow her to be the bat retriever for the Harpoons! For a whole week!!

It’s the question at the end of the week that will make April’s entire summer: will she come back?

But the real question is: can she see those shadows out on the field?

The Characters
April O’Day is twelve years old and fascinated by baseball stats. I think she could be a coach now! Danny is her disabled father, who used to be a minor leaguer himself. Her parents are separated and sharing joint custody. Her mother, Debby, is astraphobic (afraid of storms) and works in the meteorology department at a TV station.

Darren Plummer is April’s best friend and just as in love with baseball as she is. He’s also an artist with an excellent memory for their logos.

The Harpoons are…
…a minor-league Class A baseball team in New Blackburn. The home field is Haney Field named for the team’s owner, Mr. Walter Haney. Peg is his wife although she doesn’t appear in this, but two of their great-grandchildren do: Walter and Cassandra. Manny is Mr. Haney’s driver. Beth Harrelson is director of promotions and responsible for April while she’s there. Don “Skip” Smiley is the manager who’s retired from his own major league career. Ben Meeks is one of the coaches. Joe Clemmons is the head groundskeeper at Haney Field.

Juan Santiago is a new left fielder; Carl “Cannon” Caswell is the first baseman; Roscoe Barnwell is their speedy center fielder; Kyle Bonner is the newer left fielder; and, Jimmy “Moose” Baxter is a pitcher.

Some of their opponents are…
…the Springfield Braves and the Montpelier Mountaineers.

The Negro Leagues were…
…formed due to the racism of whites who refused to be around black people. And man, did the baseball teams back then miss out! Oscar “Flash” Henderson III was a star for the Blue Barons along with Lamont Porter and Henry Calloway, who were playing against the Grays. Marvin Henderson is Flash’s great-nephew; Sheila is his wife. They’re planning on naming the baby Oscar Henderson IV.

Mr. David Koh is a retired Asian man who tours the memories of his past and teaches Danny a lesson.

Marcus “Mayhem” Mayfield was in the major leagues back in the 1950s and played part of a season for the New York Giants. He also played in the Negro Leagues. Olivia Coiner is the granddaughter who takes care of him now. Red Cantwell was city council president back in 1963. Evelyn is today’s city municipal planner.

Sabermetrics is a science about baseball records, math, and statistics. Barnstormers were teams who were not in a league but played teams all over the country.

The Cover
The cover is bright in a fan array of blues radiating out from a baseball resting above crossed bats resting on blades of grass. A bright pink banner showcasing the title arcs across the top. I like the crossed bats. It feels like the meeting of two sides, a resolution of a hateful iniquity with this positive outcome. Let’s play ball!

The title says it like it is. It’s The Guilty Secret at Haney Field that has the team owner freaking out.