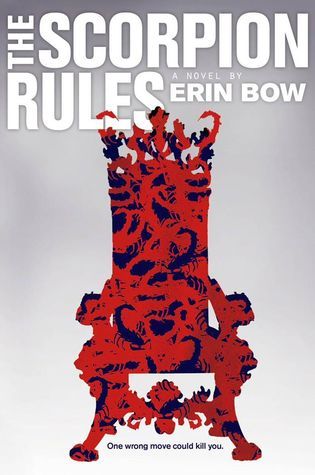 
First in the Prisoners of Peace dystopian science fiction series and revolving around the Children of Peace and Greta Gustafsen Stuart.

This ARC was sent to me by NetGalley and Margaret K. McElderry Books for an honest review.

I have mixed feelings about this one. It’s a curious world Bow has created. On one hand, I like that war finally has consequences with the leader of a country having a lot to lose. On the other hand, why is it necessary to make the hostages’ lives so awful? They’re never getting out. They’re more likely to be killed. So what’s with the terrorism and torture? The deprivations?

These are children who have had their lives disrupted, who are not allowed the freedom to play, who work at the most menial tasks, who must guard every single word they speak lest they be punished, who are deprived of so much.

The children care and worry about each other. They’re cautious friends. Cautious because any day they may be taken from their classroom and killed. Because their parents chose war over their lives. They’re afraid all their short lives, so why the torture? The restrictions?

Nor do I understand how these children, well, the ones who survive, don’t work with each other when they do become the rulers of their countries. When you observe how close Greta and her fellow inmates are, ya gotta wonder. This system has been in place for 400 years, and it seems as if the children go from being silent supporters while in the perfectures to isolated rulers who know nothing about their pasts.

Greta claims that war does not happen often — only two or three a year?? I don’t see that this system is working. The hostages don’t deter wars. What really puts them off is that threat from the sub-orbital platforms that can take out a city. Bow doesn’t make me believe in this hostage system. She doesn’t make me understand why the torture and threats are necessary. It does make it easy for me to understand the start of the tomato war, though, lol.

It’s almost an anticlimax when you learn the truth of the AIs. How can they allow this? How can they do this to the children after their own experiences?

There are tiny bits of humor sprinkled throughout — I do like Talis. Talis’ Utterances in particular, have scattered quotations from today’s culture: Resistance is futile, All we are is dust in the wind, the Roadrunner. You’ll cheer when Greta’s cohort raises that ruckus to buy time.

And Elian. You can’t help but like Elian. He is so angry and rebellious, so stubborn. And it’s his character who shows how awful this system is. And yet, I do like Bow’s point about the Perfecture being “the model of environmental rationalism”. It’s a severe place, but does teach the children the basics of life. Sounds like they’re learning that a harem is the ideal as well.

Tolliver is beyond disgusting. Jesus. I want him tortured in tiny degrees so it lasts forever and becomes more and more painful with each slice. Read The Scorpion Rules, and you’ll agree.

More technical niggles include those unbelievable love “scenes”. Nor does Greta “being brave” and “proving her frailty” make any sense. If she wants to seem weaker than she is, shouldn’t she pretend to be more hurt and not less?

“…people started shooting because that’s what passes for problem-solving among humans. See, guys, this is why you can’t have nice things.”

I think Bow would have gotten her point across better if she’d left the torture out. Of course, it does make for a more compelling story, which I only kept reading because I wanted to get inside the grey room. Find out what it was about, hoping it was different from what is implied.

I’m still not sure if The Scorpion Rules was worth it. It takes so long to get into the story before it becomes interesting, an “interesting” that only lasts about 25% of the story, although the next and last 25% does generate an interest as Bow vaguely explores the transference and the underlying truth of an AI. It also allows for the goodbyes in this world and tempts me into being curious, to want to know where, how, Bow can take this storyline further.

A world battered by climate shift and war turns to an ancient method of keeping peace: the exchange of hostages.

The Children of Peace — sons and daughters of kings and presidents and generals — are raised together in small, isolated schools called Prefectures. There, they learn history and political theory, and are taught to gracefully accept what may well be their fate: to die if their countries declare war.

Greta is controlled, logical, graceful until Elián is dragged in, kicking and resisting. The truth of him begins to shatter Greta’s shell. The Prefecture’s insidious surveillance, its small punishments and rewards, can make no dent in Elián, who is not interested in dignity and tradition, and doesn’t even accept the right of the UN to keep hostages.

…located in Saskatchewan. Greta Gustafsen Stuart, Duchess of Halifax and Crown Princess of the Pan-Polar Confederation, is looked to as a leader, although she doesn’t see it. The rest of her cohort includes Gregori “Grego” Kalvelis, the son of a grand duke of the Baltic Alliance, has a knack for technology; Thandi is heir to a great throne in Africa; Sidney Carlow is the son of the governor of the Mississippi Delta Confederacy; Han; Atta is a prince in the line of the Prophet; Han; and, Li “Xie” Da-Xia is Greta’s roommate and a god, according to her people in the Yunnan, the Mountain Glacials. Denjiro was a Child who committed suicide.

Elián Palnik is the latest hostage, the grandson of the new Cumberland Alliance’s general, Wilma Armenteros. She is also the Alliance’s secretary for strategic decisions (war). His parents are sheep farmers. Major Buckle is Wilma’s aide. Tolliver Burr is her disgusting torturer obsessed with light and camera angles.

Abbot Ambrose Devalera seems to have a soft spot for Greta. Brother Delta teaches history. Mr. Kavelis seems to be in charge of the garden.

Bat Brain and Bonnie Prince Charlie are a couple of the goats in the herd while Dipshit, Flopsy, Mopsy, and Topsy are some of the kids. The Royal Visitor is a billy goat brought in from outside to keep the goats from being inbred. This story’s Royal Visitor belongs to a trommeller family. Hannah is a girl in the family who loses her shoes. And then her grandmother.

The Pan-Polar Confederation is…
…a super-power that controls two-thirds of the world’s water. Queen Anne is Greta’s mother.

It’s Talis, Michael “Talis” Telos, a class Two AI, who was charged by the UN with stopping the wars. The method he used surprised everyone. He wrote the Utterances, a sort of bible for the world. Rachel is the Swan Rider who usually rides into the Perfecture.

Children of Peace are hostages kept at perfectures isolated from the world. No ruler-to-be is allowed to rule until he or she has a child to give up as a hostage. That child is freed once he or she turns 18, and the ruler either has to give up another child or resign her position. “Playing coyotes” is a euphemism for having sex.

Swan Riders are the executioners. Employed by the UN, they present official declarations of any sort and lead a Child of Peace to his or her execution as the Hands of Talis. Class II AIs had once been humans. Proctors are AI guards. Nursery spiders are tiny AIs who can crawl around on your skin under your clothes and shock you. The Pantopican is a satellite of some sort directly over Perfecture 4 that tracks every move and every word spoken, so it can punish. Dreamlock is one of the methods of torture. They can force you to dream what they want.

Kandahar is a “popular” example of what Talis will do to recalcitrant nations.

The background of the cover is a gradation of soft grays from neutral gray to palest smoke with a throne front and center. It’s an imposing chair of red scorpions carved against a dark blue background, and indeed, the wrong move could kill you.

The closest I can guess about the reasoning behind the title is that killing is in Talis’ nature, like that anecdote about the scorpion and the frog. This world that The Scorpion Rules and is subject to its true ruler’s nature.

8 responses to “Book Review: The Scorpion Rules by Erin Bow”