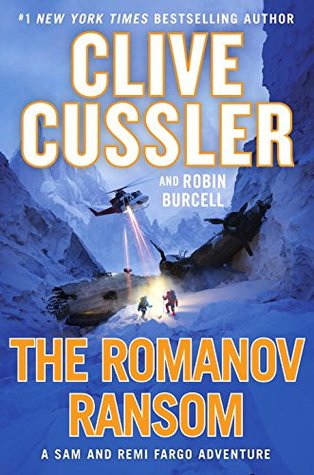 Ninth in the Sam and Remi Fargo Adventure thriller series revolving around Sam and Remi, a couple fascinated by history and archeology…who happen upon treasures quite often.

I’m such a concrete person. I like to know. And Cussler/Burcell obviously don’t think I do need to know. From the initial deposition of the ransom to plane routes, I was thoroughly confused and distracted from the story as I struggled to figure out who was where and WHEN??

There are a few positives to The Romanov Ransom: that third-person omniscient point-of-view keeps one informed of many of the characters’ actions. I enjoy the background and skillsets of the Fargos and how it plays into their current-day actions. Keeps it exciting, *grin* I also adore how very altruistic they are. They care about people. I also appreciate those historic prologues in which Cussler sets up the objective for our adventurers.

But there are such HUGE negatives. Omigod. I should’ve thought that someone as fascinated with history would have at least a rudimentary awareness of the timelines of the two world wars. Or maybe Cussler/Burcell were dipping into science fiction and time travel?? And where the hell were the proofreaders???? G.P. Putnam’s Sons needs to have another look at someone’s credentials!

As for 1928 in Buenos Aires…how is it that the brother was killed fighting in the war against the Nazis, World War II, ahem, which was in the early 1940s and yet it’s only 1928?? And, if the premise is that the Nazis were fleeing capture when the war ended in 1944/45? And since Hitler didn’t become chancellor of Germany until 1933 and Poland wasn’t invaded until 1939, you can see where I’m questioning timelines like mad.

And…sigh…I do wish Cussler/Burcell would be a little more forthcoming. I had no idea what the Gold Train was.

Overall? Read if for the adventure and do NOT expect it to make sense. And try not to let the castle/city-hopping confuse the hell out of you.

One of the Fargos’ pet projects may be in trouble in Marrakesh. The boys creating the documentary about the ratline are missing.

It’s an investigation that will run the Fargos ragged all over Marrakesh, Germany, Poland, and Brazil, as they escape assassination attempts, kidnappings, and uncover bizarre plots for world domination.

Sam (with an engineering degree and time spent at DARPA) and Remi Fargo (anthropologist and historian who just happens to have a near-photographic memory, is a world-class sharpshooter, and speaks several languages) are retired and sponsor educational and archeological ventures through the Fargo Foundation. They also enjoy exploring for treasure…! Selma Wondrash is the head of their research team and getting romantic with Professor Lazlo Kemp (The Eye of Heaven, 6), employed by the Fargos for his skill in cryptology.

Ruben Haywood is a case officer for the CIA’s Directorate of Operations and a friend of Sam’s. Donovan Archer is a friend who used to be with the FBI and now runs a security firm. Ambassador Halstern and his wife are quite useful at the party. Senator Jones is interested in a trade agreement with the Germans.

Marrakesh
Brand and Karl Hoffler are doing a documentary on the ratline, a system of escape routes used by Nazis and Fascists fleeing Europe. Albert Hoffler is Selma’s cousin and uncle to the boys. Zakaria Koury is helping the Hofflers. Lina is Zakaria’s cousin. Kadin is her major domo? Durin Kahrs is supposedly a friend of Karl and Brand’s from school in Germany.

Buenos Aires
Dietrich Fischer is Ludwig’s great-grandnephew. Also known as Avi, he owns a bar, El Avion, in a village. Nando Sandoval will be the Fargos’ guide. Julio is a helicopter pilot.

Rolfe Wernher is a crime boss in Germany with a family interest in Operation Werewolf. Gere Stellhorn is his nephew and an enforcer. Leopold Gaudecker loves to beat people. Helga is Rolf’s housekeeper/cook? Friede is a late worker.

The Russian Commander Tatiana Petrov is undercover for the FSB as the head of a Russian crime family. Viktor Surkov is her partner. Ivan Ivanov, a.k.a., Ilya Aristov and Felix Moryakov, and Nika Karaulina made a mistake. Nika’s mistake, however, was so much bigger. Lieutenant Tomasz Gorski works for the Internal Security Agency and interested in the Fargos’ activities in Wałbrzych.

Kaliningrad, a.k.a., Königsberg
Sergei Vasyev is a Russian translator; his second cousin Leonid is a Russian archeologist. Andrei Karpos is an historian and guest lecturer at the university whose work threatens him. Miron is a retired groundskeeper for the castle grounds — well the castle was completely burned out in 1944.

Castle Książ, Poland
Renard Kowalski is a Project Riese (unfinished Nazi secret project that involves the Gold Train) tunnel expert who works at Castle Książ. Crazy Gustaw Czarnecki had been Renard’s friend and is widely known as a paranoid recluse. Wilhelm Schroeder restores old furniture in Münster as a hobby; by day he’s a lawyer with Bachman, Dreschler and Dreschler. Laurenz Hippler manages the castle grounds.

The Wolf Guard are…
…everywhere. Cross them at your peril.

Eckardt Hässler is a cryptographer who worked for the Allies.

Buenos Aires, 1928, and Unternebmen Werwolf is…

…Operation Werewolf. Klaus Simon is twelve years old and a hero. Dietrich was his older brother, killed in the resistance against the Nazis (and Hitler became chancellor of Germany in 1933). Uncle Ludwig Strassmair is a Nazi jerk, an Obermann who commanded a prison camp. Herr Heinrich and Greta seem to be planning this escapade. Joe Schmidt was a last-minute passenger.

Pyotr had been a servant of the Dowager Empress Maria Feodorovna.

The cover is a chill blue of ice and snow, a crashed plane leaning against the side of a cliff, deep within a narrow valley. A helicopter shines a trio of spotlights upon our adventurers, dressed to warm. Cussler’s name is huge at the top in an embossed white with a copper outline while Burcell’s name is almost there below it and just off-center in white. The title is at the bottom in a reverse of embossed copper with a white outline. Beneath that is the series information in white.

The title is the initial impetus for the Werewolves, The Romanov Ransom.