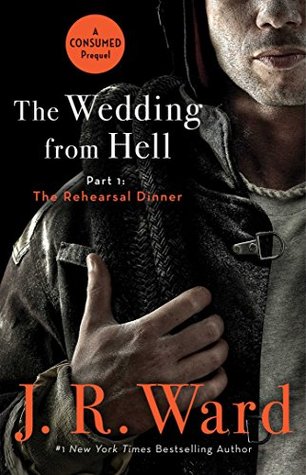 Buy on Amazon
Goodreads
Also by this author: Possession, The Shadows, The Bourbon Kings, Blood Kiss, The Beast, Blood Vow, The Chosen, Blood Fury, “Dearest Ivie”, The Thief, "The Reception", Consumed, The Savior, Blood Truth, Where Winter Finds You, The Sinner, J.R. Ward, A Warm Heart in Winter, Claimed, The Wolf

First in The Wedding From Hell (and 0.5 in the Firefighters universe) contemporary romance series. This prequel “series” is intended to entice you into wanting to read Ward’s Consumed, which is being released 2 October 2018. And yes, it done did the job on me! I can’t wait!!

P.S. This three-part prequel series is currently free before Ward’s Consumed is published. And I do wish she and her publisher had simply released this as one book!! I hate these bitty “tales”.

It is a nice switch-up with Danny-boy in love with Anne who wants nothing to do with him. Not that that “want” means anything, doesn’t help that Danny has a, um, rep.

That speech Danny gives as best man…hoo, boy. It all turns back to Danny being gone, gone, gone in love and determined that Anne will understand that.

The action centers around Anne and Danny as she battles her feelings and he battles her refusals, a battle aided by Ward using third person dual protagonist point-of-view. The other characters that will be appearing in Part 2 are more of a background to their drama.

It’s both cute and annoying with all this back-and-forth I wanna, I can’t. Until it all becomes moot.

It’s one giant mistake, in so many ways. And yet Anne’s hanging with the boys on Moose’s bachelor party. That damned Danny went and spoke up for feminine equality when Deandra worried about balance amongst the bridal attendants.

It’s even more of a mistake when Anne and Danny break up that assault with a deadly, and Anne realizes what she could lose if she doesn’t follow her heart.

Anne “Sister” Ashburn has always wanted to be a firefighter. The rush of the job. She’s also the younger sister of Thomas Ashburn, Jr, the New Brunswick fire chief. Their father had been Thomas Sr, a supposed hero.

Dan “Danny-boy” Maguire is a fellow firefighter with an amazing sense of women, i.e., he’s not into objectification but brains! John Thomas had been his twin brother, lost in a fire five years ago.

This new band of brothers…of firefighters is…
…at Firehouse 499 and part of Anne’s crew. Robert “Moose” Miller is the impending groom (who’d been raised in fostercare); Patrick “Duff” Duffy, the resident golden boy; Deshaun Lewis is the engineer; and, Emilio Chavez.

Jack and Mick are on the SWAT team and yet are Moose and Danny’s roommates. Ty Lewis, Deshaun’s cousin, is a sergeant with Search and Rescue.

Deandra Cox is the bride who had been a receptionist at a beauty salon six months ago.

Candy is a hooker with a boyfriend, Rob. She claims Antonio is her brother, but Anne and Danny are reading “pimp”. Or maybe it’s the other way around; I couldn’t get a read.

Mike’s Tuxedo Rental is where the groomsmen are renting their tuxes. The Local is the firefighter union’s meeting hall. The Stripper Strip includes the Cat’s Meow. St Mary’s Cathedral is the wedding venue. D’Angelo’s is an Italian restaurant where they’ll celebrate with the rehearsal dinner.

Yeah, the only way I’m reading firefighter in this is the coil of rope? hose? over Danny’s shoulder. The stubble on the lower left quarter of his face I can see works as well. Otherwise the battered leather jacket and gray sweatshirt just tell me this guy works hard. This partial of Danny — lower quarter of his face, and the upper quarter of his chest and shoulder — fills better than three-fourths of the cover with a wedge of black in the upper left of the background. The series information is at shoulder level in orange with the “part” information tied in with the title in white. The author’s name is a large orange at the bottom with a tiny info blurb below that in white.

The title is the topic, “The Rehearsal Dinner”, which sets that hook.

2 responses to “Book Review: “The Rehearsal Dinner” by J.R. Ward”