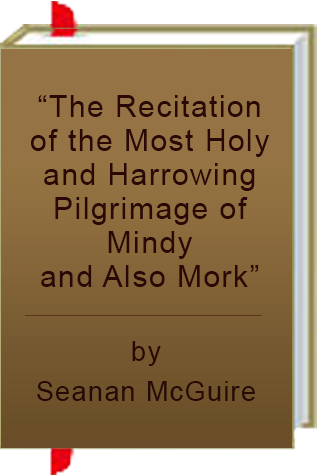 "The Recitation of the Most Holy and Harrowing Pilgrimage of Mindy and Also Mork" by Seanan McGuire
Genres: Urban Fantasy
Published by Patreon on April 1, 2017
Pages: 62
Format: eBook
Source: the library

Goodreads
Also by this author: Chimes at Midnight, Indexing, The Winter Long, The InCryptid Prequels, Pocket Apocalypse, A Red Rose Chain, Reflections, Once Broken Faith, "Dreams and Slumbers", Chaos Choreography, Magic For Nothing, Indigo, Every Heart a Doorway, The Brightest Fell, "Of Things Unknown", Beneath the Sugar Sky, Night and Silence, "Suffer a Sea-change", The Girl in the Green Silk Gown, Tricks for Free, That Ain't Witchcraft, "The Measure of a Monster", The Unkindest Tide, "Hope is Swift", Come Tumbling Down, Imaginary Numbers, "Follow the Lady", "The Fixed Stars", "Forbid the Sea", "No Sooner Met", Across the Green Grass Fields

A short story, 6.5 in the Incryptid urban fantasy series and revolving around a family of cryptozoologists. The focus here is on Mindy and Mork as they make their way home.

This short is located in the back of Tricks for Free, 7, and I still can’t decide if I wish I had read it before or after…

My first gripe is that if it’s 6.5 in the chronology, why would anyone put it last in the seventh installment? Why not put it first??

For a short, it’s two stories in one with Sam’s side (in third person) as he worries about Annie, and Mindy’s perspective as she and Mork travel home.

This isn’t one of my favorites tales about the Aeslin mice, but it does expose us to Mindy’s thoughts (using first person protagonist point-of-view) about the Aeslin mice and their belief system. We also discover the dangers of traversing the airport when you’re mouse-sized! Eeek.

You can’t help but fall in with Sam’s stress about those in-app purchases in Candy Crush, lol, by the Aeslin mice. As for Sam’s issue with the mice and their capital letters, well, it’s my own as well. How do they decide which ones to cap??

Ooh, Grandma has her own secrets…and Mary lets it out! It is Grandma’s fault for being so pissy.

It does get complex what with the rules Mary has to follow, Grandma’s anger at Sam, Sam’s worries for Annie, and of course, those mice traversing the airport.

Antimony has fled the carnival…without the Aeslin mice, treasured family chroniclers who must reach the Price home base in Oregon.

It’s up to Sam to get the mice to the airport…and Mindy and Mork will take it from there.

Mindy is the Aeslin mouse who volunteered in Magic For Nothing, 6, where she met up with Mork, an Aeslin mouse trapped with the Covenant. The Aeslin mice keep an oral history of absolutely everything that happens in the Price-Healy family.

The Spenser and Smith Family Carnival is…
…from whom Annie fled in Magic For Nothing. Sam Taylor is a fūri who is a star on the trapeze as well as Emery Spenser‘s grandson. Delilah had been Emery’s daughter and Sam’s mother who fled at his birth. Umeko, a Jorōgumo, was the performer at fault in Magic For Nothing. Ananta was another performer, a cobra cryptid with two brothers.

Aunt Mary Dunlavy is a crossroads ghost (Sparrow Hill Road, 3.5), the Price babysitter, and an honorary aunt to Annie. Annie Price, a.k.a., the Precise Princess, was the Price with whom Mindy was traveling. Evelyn Baker, Annie’s mother, is the Thoughtful Priestess. Artie Harrington, Annie’s maternal uncle/cousin?, is the God of Chosen Isolation, with his computers.

Jessica and Angelica are the dragons at the airport. Allison is Angelica’s seven-year-old daughter.

The title is a perfect example of the completeness of the Aeslin Mice for this is “The Recitation of the Most Holy and Harrowing Pilgrimage of Mindy and Also Mork”.

3 responses to “Book Review: “The Recitation of the Most Holy and Harrowing Pilgrimage of Mindy and Also Mork” by Seanan McGuire”