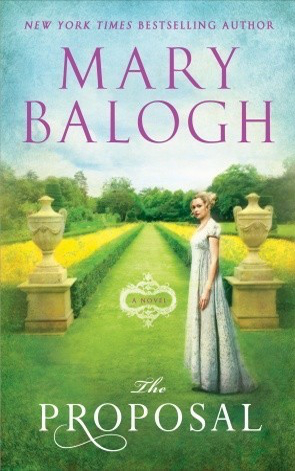 The Proposal by Mary Balogh
Genres: Historical Romance
Published by Delacorte Press on May 1, 2012
Pages: 321
Format: eBook
Source: the library

First in The Survivors’ Club historical romance series (and loosely connected to the Bedwyn Saga) and revolving around a group of men wounded in war. The couple focus is on Hugo Emes, Lord Trentham, and Gwendoline, Lady Muir.

I came to The Proposal backwards, as I started with The Arrangement, 2, and was intrigued with Balogh’s approach in writing of the walking wounded. Soldiers who come home from the Napoleonic Wars with wounds we don’t necessarily see. It makes it useful that Balogh is using a third person dual point-of-view, switching the perspectives between Gwen and Hugo, which gives us insight into what they’re each thinking and feeling, giving us a better sense of Hugo’s conflicts.

And, ooh, the conflict and emotions that run throughout with the dour, granite-jawed Hugo and his plain, forward speaking and sense of inferiority, lol, hating the gentry and their ways yet loving his fellow survivors. Fortunately, he has no time for the snubs he receives from those “above him” socially, and he is so amazing with that insult delivered him. And Gwen’s speech about her family’s reaction to Grayson’s insult was superb!

It’s Hugo’s approach to Gwen that has her shocked and intrigued. He is right, though, it has all been one-sided, and he challenges Gwen to see the other side of society. And I do so appreciate her willingness to try and see a situation from his perspective!

It is so very important to both Hugo and Constance that a man do something, that he not be an idle rich man, whiling his days away at play.

The series arc is a treat and, of course, follows the theme of each of the survivors finding their supportive partner. I absolutely love how supportive this group is of each other, knowing that talking about everything can ease the pain.

Balogh follows the mores and culture of the period fairly well — I did appreciate Balogh making note of the impropriety of Imogen’s presence in this group.

It was in reading The Proposal that I discovered how closely the stories in The Survivors’ Club series follow each other, most overlap the others.

Hugo does make me nuts about insisting he will not court Gwen. I do wish Balogh had created more of a sense of his angst.

An interesting cast of characters from the whiney Vera to the selfish and possessive Fiona who uses her “ills” to manipulate; Hugo’s fears which play to the strict class boundaries of the time and that lack of imagination he deplores — those beautiful flowers he planted, poor boy *laughing in sympathy*; Gwen’s fierce independence; and, then there’s that irrational guilt that both Gwen and Hugo harbor.

It’s a lovely character arc for both of them, as Hugo learns it’s safe to let go and the truth of Vernon’s life and death becomes evident. I sure hope we see Grayson get a comeuppance!

Hugo is such a real person, as is Gwen and Constance — and their families. They’re not at all stuffy or ambitious, but they do want a certain type of relationship, one that is both easy and stimulating. Wait’ll you read what Constance thinks of the gentlemen of the ton, *grin*…you’ll love her!

It begins with a joke the night before, as Hugo confesses his need for a wife. But she must be one of his own class. Middle class.

Gwendoline Grayson, the seven years widowed Lady Muir, who has her own demons, accepted the invitation out of the kindness of her heart. Her husband, Vernon, Viscount Muir, committed suicide. Her mother lives at the dower house with her on Neville’s estate. Neville, the Earl of Kilbourne, is Gwen’s brother and lives at Newbury Abbey. Lily is his wife, and they have three children, Sylvie, Leo, and the newly arrived Phoebe Wyatt. Lauren (A Summer to Remember, Bedwyn Saga, 0.6) is Gwen’s cousin-by-marriage. More family includes the Duke and (Aunt Elizabeth) Duchess of Portfrey; the Duke and Duchess of Anburey; Joseph, the Marquess of Attingsborough (and one of her favorite cousins), who is the son of the Anbureys, with his wife, Claudia, and snotty daughter, Wilma, the Countess of Sutton and her husband; Viscount Ravensberg and his wife; Viscount Stern and his wife; and, others.

Last year, Captain (promoted to major) Hugo Emes inherited his father’s vast business and trading empire. He was given his title, Lord Trentham, for his heroism in battle, but he suffers psychologically. William Richardson is the manager of the businesses his father left him.

Three hundred of his own men died in that Forlorn Hope. Eight survived.

Crosslands Park in Hampshire is the country property he bought and loves. Fiona is his young stepmother; he is guardian to Constance, his half-sister who adores him. Fiona refuses to have anything to do with her own family. Hilda is Fiona’s sister; Paul Crane is her betrothed. I think Colin and Thomas are Constance’s cousins. Philip Germane is Hugo’s maternal uncle and works for a tea company, traveling in the Far East. Theodora Palmer is a cousin who married a banker. Bernadine Emes is married to Cousin Bradley. Mavis and Harold. Aunt Rose and Uncle Frederick Emes; their daughter, Cousin Emily, is fourteen. Aunt Henrietta Lowry is the widowed eldest sister of Hugo’s father and the family matriarch. Mr Rowlands seems to get comfortable with some of the uncles, and Mrs Rowlands becomes friends with Aunt Barbara. Cousins Gillian, Mark, and Claude are there, as are Cousin Sebastian, Olga, and Uncle Frederick. There is a ironmonger’s next door to the grocery and is a “veritable Aladdin’s den” run by Ned Tucker.

Penderris Hall, Cornwall, is…
…the country home of George Crabbe, the Duke of Stanbrook, who gathered these men together to help them cope with wounds, both physical and psychological. His own issues include the guilt he felt for the death of his wife, Miriam. These survivors include Vincent Hunt, the new Viscount Darleigh, who lost his hearing and his sight; the stuttering Flavian Arnott, Viscount Ponsonby, whose fiancée couldn’t face his wounds; Hugo Emes, who was the hero of Badajoz, is from a merchant family; Ralph Stockwood, Earl of Berwick; Sir Benedict “Ben” Harper whose legs were crushed; and, Imogen Hayes, Lady Barclay, who lost her husband to torture she was forced to witness. Lambert is the butler. Dr Jones is the in-house physician.

The smarmy, whining, hypocritical Vera Parkinson lost her husband, a younger brother of Sir Roger Parkinson, and begs for support. Lieutenant-Colonel Jason Grayson has had it out for Hugo from the beginning of Hugo’s military career; Grayson also inherited Vernon’s title. Later, Balogh says he’s a general now, so which is it? Sir Isaac Bartlett is a friend of Grayson’s. The angry Lieutenant (promoted to captain) Francis Carstairs was with Hugo at Badajoz. His mother is the Viscountess Wragley.

For her first Season, Constance…
…enjoys meeting Allan Grattin, David Rigby, Matthew Everly, and Gregory Hind among others. Lords Merlock and Ruffles are some of Gwen’s possible beaus.

There is a mention of the Duke and Duchess of Bewcastle (Slightly Dangerous, 6 & last) and the Marquess and Marchioness of Hallmere (Slightly Scandalous, 3).

There’s a feeling of pointillism to the cover with its pastels and manicured garden. A soft blue summer sky at the top with a grassy green path leading to the horizon with clipped hedges separating the path from the beds of yellow flowers, two great stone urns on pedestals marking the entrance. It’s Lady Muir in a puffy-sleeved white floral print empire dress, standing in profile before the entrance. An info blurb in purple is at the very top followed by the author’s name taking up the upper third. A white curvy and curlicued frame encases the info that this is a novel…surprise…I’d’ve preferred the series information. The title is at the very bottom in a white scripted font.

The title is what it’s all about, from the men joking with Hugo about The Proposal he must make and the torturous path he takes to finally get there.

6 responses to “Book Review: The Proposal by Mary Balogh”