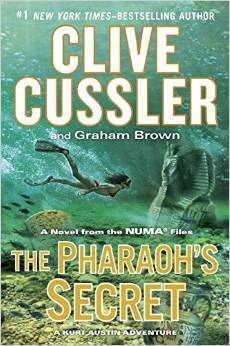 Thirteenth in the NUMA Files series and revolving around Kurt Austin and Joe Zavala.

I gotta admit that I started this story, and then got bored. It was the same ol’, same ol’. And I mean, really, what else did I expect? Of course it’s following the formula for a NUMA action suspense story!? Duhh.

It begins in 1353 BC with a very confusing, almost useless, prologue that really doesn’t say much. It continues this confusion with the interlude in 1798. I suspect this is why I got bored. I was too confused. To be honest, you could probably skip the prologues and move right into the part where Kurt appears. Yeah, there’s a sort of introduction before Kurt and Joe appear that sets up the conflict that sets it all in motion. That contemporary intro didn’t pull together for me either about the ship that sets off the toxic cloud.

There’s an interesting summary of back history on the military-industrial complex of Egypt. The one that ruled the country from 1952 until the Rebellion in 2011.

I do enjoy how Cussler weaves history into his contemporary stories. That bit about the Italian spies was one of those tidbits that brings an extra depth to the overall story. I also enjoyed how enthusiastic Edo became and the way his contacts rallied around him.

It was fun with lots of action, but not quite up to the usual excitement. Yeah, that same ol’, same ol’…

A toxic cloud puts Lampedusans into a deadly coma. An example of what Tariq Shakir is willing to do to control North Africa and only part of a diabolical plan to bring these desert countries to their knees.

Kurt Austin, Director of Special Assignments, and Joe Zavala, a genius with anything mechanical, are partners and troubleshooters for NUMA, the National Underwater and Marine Agency. Dr. Paul Trout, a geologist, and his wife, Dr. Gamay Trout, a marine biologist, are the ideal couple to encounter when aquifers suddenly start drying up. Reza al-Agra is a surveyor and director of water recovery for the Libyan government.

The Sea Dragon is…
…captained by Gary Reynolds and excavating relics on the floor of the Mediterranean. Michelle Woodson is one of the divers.

Lampedusa is…
…an island that belongs to Italy and has a small population. Constantine Bracko is the ship’s master aboard the M.V. Torino. Ammon Ta, a.k.a., the Egyptian by the crew, paid handsomely to have his cargo shipped. Dr. Renata Ambrosini, a specialist in neurobiology, is at the island hospital, but is really undercover for the Italian government. Dr. Hagen is a suspect. Cody Williams was the Roman antiquities expert heading up the research. Dr. Ravishaw is part of the revival team.

Malta is…
…where the Maltese Oceanic Museum is located. Dr. William Kensington is its frightened curator. The D’Campion Conservancy is a nonprofit group that retrieves relics. Etienne, a descendant of Emile, and Nicole D’Campion head it up.

Egypt
Former Brigadier General Edo is now working in advertising for his brother-in-law.

France
Camila Duchene is descended from the family who once housed Admiral Velleneuve.

…an organization put together by Colonel Tariq Shakir, a former member of the Egyptian secret police, who is a goal-oriented sociopath. Hassan is his second-in-command and closest advisor. “Talon” is one of the Maltese hitmen. The very scarred Number Four is a sniper who becomes “Scorpion“. Farouk is manning the compressor. Katz is one of the guards. Brad Golner and Zia are biologists.

Alberto Piola is a powerful Italian lawmaker. Anna-Marie is probably dead at this point.

An artist and one of Napoleon’s savants, Commissioner Emile D’Campion is with the Commission of Science and Art. Admiral Horatio Nelson. Admiral Brueys is aboard L’Orient. Rear Admiral Pierre-Charles Villeneuve is aboard the Guillaume Tell.

Manu-hotep is a priest of Akhenaton, the pharaoh who insisted everyone worship one god, Aten. Abydos is the City of the Dead. Osiris is the god of the afterlife and fertility.

James Sandecker, the founder and former head of NUMA, is currently the vice-president of the United States. Terry Carruthers is his aide and very good at following orders but not much on initiative. Rudi Gunn is the assistant director of NUMA while Dirk Pitt is its director. There’s a “guest” appearance by Juan Cabrillo, the Chairman of the Corporation (see The Oregon Files), in relation to an incident in Monaco.

The cover is pretty cheesy actually. It’s blue-green and a collage of what the story is about. A beautiful woman in an orange bikini, snorkel, mask, and fins is swimming toward a bust of a pharaoh’s head, tablets, and amphorae lying on the sea floor. I’m really impressed that she can snorkel down that deep when the divers in the story need to be concerned about the bends. Yeah, yeah, I know. It’s fiction.

The title is also a metaphor, as it’s not so much The Pharaoh’s Secret as his priests’.