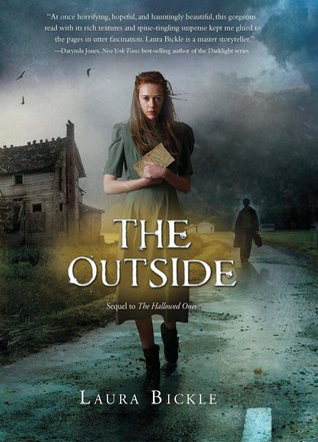 The Outside by Laura Bickle
Genres: Apocalyptic, Horror
Published by HMH Books For Young Readers on September 3, 2013
Pages: 320
Format: Hardcover
Source: the library

Buy on Amazon
Goodreads
Also by this author: Dark Alchemy, The Hallowed Ones

Second in The Hallowed Ones apocalyptic science fiction-horror series for Young Adult readers and revolving around Katie, a serious Amish girl, and Alex Greene, a college student.

Okay, so, The Outside was good, not as good as The Hallowed Ones, 1, but a good read with all the usual action when people have nowhere to go and are fleeing monsters. What’s different in this tale of apocalyptic horror is Katie’s reflections on religion. Her religion and everyone else’s. It’s an interesting conflict as Katie discovers that her religion is not the only one that offers protection from the vampires. That her way is not the only way to live in God’s grace.

On the plus side, it’s all about survival and doing the right thing. I know. Sometimes it’s hard to tell. On the negative side, it’s about power and jealousy, as we discover when those who think they are so “holy”, ahem, are shown to be like any other man. Striking out from behind their “shields” to avoid hearing or seeing what they don’t want to acknowledge. Hiding behind “righteousness”, using religion as an excuse to do what you want. Yep, really knocks back that pride. Add in a community that does not question the rightness of their so-called superiors’ decisions.

I do like Katie. She’s a practical woman, and from Katie’s perspective, using first person protagonist point-of-view, we see and hear only what Katie does. And I can definitely relate as she comes to understand the value of what she left behind. Lord knows, I got to missing 7-11s, iceberg lettuce(!), and choices in the stores when I lived in Sierra Leone!

It’s a journey that allows Bickle to comment on the negatives of animal habitats and the unexpectedness of the Marian shrine with some delight thrown in when Alex and Katie discover the department store. I’m still not sure what Horace and Fenrir thought of it, lol.

Matt’s explanation of his discovery was an odd blend of woo-woo and science, which just goes to show that one should never dismiss the possibilities. As for Elijah’s backtracking, it does provide Bickle with the opportunity to inject a comment about “the emotional work of faith”. And is she ever right. It is hard work to repent, and in turn, to forgive.

It’s a journey in which Kate questions God with some thoughtful conclusions.

To be Outside is to die. Everyone knows this. And yet the Elders are so frightened, so in denial, that they insist on a strict observation of the Ordnung: Katie, Alex, and Ginger must be forced out into this world turned nightmare.

It is a world that is not safe for humans anymore, and the three of them flee with the day, struggling to stay alive.

Katie “Bonnet” is a young Amish girl banished from her community along with the tattooed Alex Greene, an anthropology student fleeing the contagion whom Katie rescued. Cassia had been his girlfriend. Their white horse is Horace…a corruption of Horus. Fenrir is a wolf that attaches himself to them after he was freed.

Ginger Parsall is an Englisher who had been a friend of Katie’s family, who was also banished. Her husband, Dan, is in the National Guard, and she believes he’s safe. Their two children? Their son is still missing.

Water’s Edge is…
…in the Great Lakes region and was originally a Methodist colony used for religious conferences. Judy, Keene knows something about horses, Cora is a nurse, and Matt is a biologist who taught at Case Western. Linh and Yen were on the road.

The Plain community
The Amish Elders refused to see the truth. Elijah Miller had been Katie’s fiancé until his betrayal. Herr Stoltz is the Hexenmeister. Frau Gerlach is the midwife. Some of the Amish men have taken up arms, including Elijah(!) and Seth Beller. Sarah is Katie’s little sister. Cooper and Sunny had been Katie’s dogs.

The soldiers include…
…Captain Simmonds, Private Tobias who guards Katie, and Corporal Jasper who is a medic.

A Himmelsbrief is a petition to God on behalf of someone. A Hexenmeister does the Lord’s work but differently from the clergy. Gelassenheit means to surrender to God’s will. Rumpspringa is when young Amish are tested in the Outside world. The Ordnung are the Amish laws. Tobit is a righteous man with a son, Tobias; Sarah had lost seven husbands.

Pastor Gene was warned by the snakes. Masaru Emoto in Japan had done experiments with water. Quite interesting and makes me want to grab a microscope. Ya know, just in case…

The design of the cover is consistent with the look of the first story, The Hallowed Ones, with each unique to their tales. In this story, the cover is a range of grays, blues, and browns with a background of stormy-looking blue, gray, and purple clouds. The prominent element is Katie standing off-center, her long reddish brown hair pulled back from her face and blowing in the wind, in her elbow-length, below-the-knee plain blue dress, clutching her beige petition to God, as she stands hunched over in her dark calf-high boots in that wet and dirt strewn road. I’m guessing the dark figure retreating away from us is Alex in a long coat, carrying a bag, and striding away from us on his mission, an old, abandoned house on the left with a row of ravens hunched on the roofline.

A testimonial in cream is at the very top. The title is across Katie’s hips in a distressed gothic font with the series information immediately below it and a glow of gold to ensure you see it. Both are in white. The author’s name is at the very bottom, also in white.

The Outside is unprotected, unhallowed, and full of horrors that want to take you down. 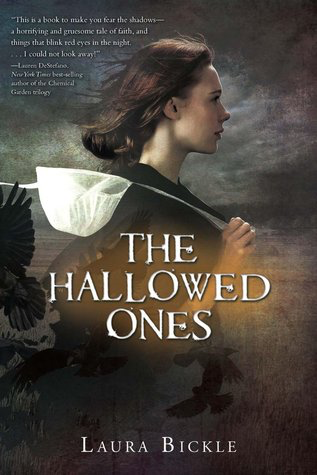 Book Review: The Hallowed Ones by Laura Bickle
Review of Dark Alchemy

6 responses to “Book Review: The Outside by Laura Bickle”