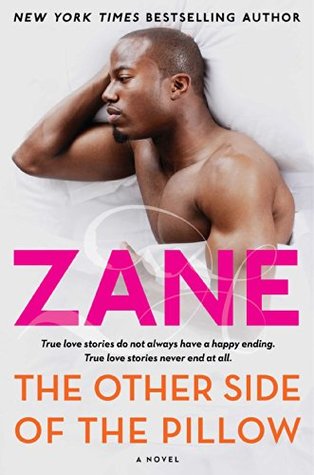 The Other Side of the Pillow by Zane
Genres: Chick Lit, Contemporary Romance, Romance
Published by Atria on August 5, 2014
Pages: 288
Format: eARC
Source: Netgalley

Jemistry Daniels is a bitter woman and not trying to hide it. Even though she is beautiful, intelligent, and makes six figures a year as a high school principal in Washington, DC, one man after another has failed her. So she decides to give up and join the party by adapting the entire “friends with benefits” mentality with a couple of men that she beds on the regular but refuses to hold any kind of real conversation with, in fear that she might actually catch feelings. Everything is going according to plan until she meets Dr. Tevin Harris, a prominent vascular surgeon, one night at a poetry slam. Tevin listens to her deliver her male-bashing poem and instead of steering away from her like most men with any common sense would do, he asks her out. Tevin has been casually dating for years, ever since his failed marriage to Estella. They had suffered several miscarriages and the emotional pain had become too much for either one of them to bear and still wake up with each other every morning.Opening up, gaining trust, tearing down barriers, and ultimately, having the audacity to love again is not easy for either Jemistry or Tevin. It takes a lot of transparency, emotional honesty, and patience to even begin to build a life together by helping each other rebuild what has been broken.The Other Side of the Pillow examines, explores, and exposes what it means to truly fall in love. It proves that true love stories do not have a happy ending. True love stories never end at all.

This is a romance series with the couple focus on Jemistry Daniels and Tevin Harris. Based in Washington D.C.

My thanks to NetGalley and Atria Books for providing this temporary ARC for me to read. Yeah, temporary, as in they’re canceling my access to it as soon as it’s published. Talk about a cheap shot. Won’t be reviewing any more Zane books with this attitude. And, yes, it’s cast a pall on how I’m looking at this story, so take this with a grain of salt.

My Take
We view this from two different points-of-view: Jemistry’s and Tevin’s. Mostly, it was depressing for Jemistry’s attitude and how incredibly defensive she is. She’s so defensive that she’s offensive. I do agree with parts of it, and I’m not sure if I’m more envious of her take-charge attitude or appalled at how she treats people. Now, Tevin. Oh, yeah, I love how Zane portrays his character. What we all want in a man, but rarely acknowledge. That boy is too good to be true!

I did enjoy the inside view Jemistry gives us of her job as a principal. She sounds like a woman who truly cares about the kids, and I wish we had more women (or men!) who cared. There’s an excellent — and scary!! — section in which Jemistry talks about the negative effects of Facebook for kids, costing so many of them their bright futures, losing full-ride scholarships. Tevin, too, is a dream at his job. I love how caring he is of his patients and their families. How much his ego does not get in the way!

There are the stupid moves. That scene in which Jemistry tells Wesley off. What was she thinkin’? She’s had plenty of experience with his reactions? So, why does she do it like this? She wants to get one more smack in? Why wouldn’t she move her stuff out before she tells him. That kind of guy would destroy her things. Although…I did LOVE her response with that skillet! Go, girl! Oh, please, she’s depicted as a smart woman: how can she not realize that Tevin and Floyd are both Type As?

I can understand Jemistry’s pain and frustration; I do not understand her incredible rudeness. Nor can I understand how she can have had such a long line of losers without figuring it out earlier. What a miserable life. And now she intends to write ’em all off because she can’t be bothered to pay attention at the start of a relationship? She’s an intelligent woman. Get some help. Figure ’em out before it gets too far along. Don’t just end it all. I do think she’s practical with the friends-with-benefits bit. Who says only men can put their emotions on hold?

Then there’s that scene between Winsome and Tevin. I can not believe that Jemistry is that stupid. She knows what her roommate is like. Actually, I can’t believe Tevin is that stupid either to bring the topic up as I’m sure Jemistry has informed him of her roommate’s proclivities.

I gotta say that Winsome is really rude. Fine, if she wants a threesome or whatever, just keep it in your room if you’ve got a roommate. I cannot imagine bringing home a date and encountering that initial scene. I cannot understand why someone who is bisexual thinks it’s okay to be in a committed relationship with one sex, and then go out and have sex with someone of the other sex and think that’s okay too. It’s the same as if you were merely heterosexual or gay. If you’re in a committed relationship, that’s it. You don’t go out screwing around.

Jemistry is bold and out there about what she wants, which I like for the most part. She cracks me up with her nicknames. It does get kind of difficult to remember she’s a high school principal as I listen to her potty mouth. And some of her terms for her body parts, oy. Drink from my fountain?

I do like the point Zane makes about people uprooting themselves all the time to move to another country, and it’s not the big deal that so many Americans make of it. Then there’s Jemistry/Zane’s salient point that love is a happily-ever-after. That true love stories never end at all. Very sweet.

As for the book description saying how hard it is for either of them to love again? What book were they reading? Tevin practically falls in love the moment he sees her at the poetry reading. As for Jemistry, Zane never does explain how Jemistry goes so quickly from using men to satisfy her needs to suddenly being monogamous with Tevin.

The Story
Jemistry’s had such bad luck with her choices of the male persuasion, that she’s sworn off men. Nuh-uh. No more. She’ll use ’em for a booty call, but that’s it. It’s all they’re good for.

Until she meets Tevin Harris.

The Characters
Jemistry Daniels is the principal for a high school in Washington D.C., and she has a bad track record with men. Wesley is only the first in a long line of jerks. Winsome is her very sexually active bisexual roommate; she works from home as a fake review writer. Anthony and Gregory are Jemistry’s fuck buddies, and Anthony’s annoyed with being only that.

Dr. Tevin Harris is a vascular surgeon at Sibley Memorial intrigued by this male-bashing woman. Estella is his ex-wife. His father is also a vascular surgeon and lives in Sweden since the divorce. His mother lives with his sister Alexis; I have no idea who or where his other sister is or lives.

Medger Evers High School
Lilibeth Parker is the school secretary. Uniqua Mays is Brian’s mom and a real pain. I can’t blame her son for wanting to get far away from her. Virgil Adkins is an excellent math teacher who happens to be gay. Lee Ricci is a former student who made it and is held up as a role model.

Sibley Memorial
Floyd, Tevin’s best friend, is a cardiologist who plays hard, even though he’s married to a wonderful woman, Courtney. Dr. Horton is an ob-gyn.

Queen Aishah is the host for the poetry evening. Kay Kay and Dominic are siblings and the couple with Winsome that first time. Cynthia is one of Winsome’s exes. Katrina Maxwell is a coworker after Tevin. Magdalena Chavez is a rep with Lincoln Pharmaceuticals, and she’s had her eye on Tevin as well.

The Cover
The cover is simple and gorgeous with Tevin lying naked on his side — under the covers, unfortunately.

2 responses to “Book Review: The Other Side of the Pillow by Zane”