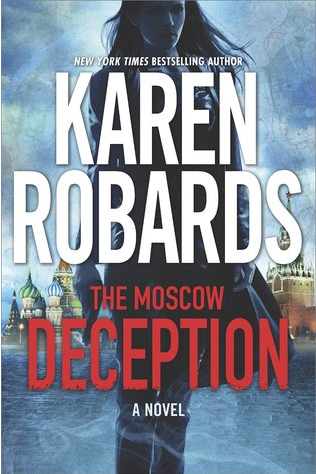 Buy on Amazon
Goodreads
Also by this author: The Ultimatum

Second in The Guardian action thriller series and revolving around a thief who moonlights as a security consultant.

What disappointed me about The Moscow Deception is that The Fifth Doctrine, book #3, isn’t coming out until 2019. Nooooo… I wanna read it nowwwwww. Especially after this ending!!

This was so amazing, and Bianca is such a softie, when needed *grin*. That first chapter is like a short story, as Bianca sails in to save the day. It’s such a simple ploy for all the complexity. Then, as Robards continues with her third person subjective simple point-of-view from Bianca’s perspective, we delve into yet more of her personal life and how it intertwines with Guardian Consulting, the men hitting on her, the client meets, and the dreaded charity ball. *Laughing*

I do hate Fourth. He’s such a pushy, manipulative, lying bastard. Why both sets of parents even want Evie to stay with him has me flabbergasted.

What amazes me is the number of secret identities Bianca has. I don’t know how she keeps track of ’em all. Some of ’em have been around for decades! Of course, having such a long lifestyle of thievery means Bianca also has a long list of contacts who can be helpful at any stage of a thief’s journey, and we do get to meet quite a few of them.

Then there are the tactics involved and the strategies on connecting up with someone, evading a world-ful of assassins chasing a bounty, trust, timing, whew…Robards will keep you turning those pages.

Hmph, Robards finally reveals the secret in The Ultimatum, 1, to Thayer’s and his crew’s survival in Bahrain.

Nope, The Moscow Deception is definitely not short of action and thrills, right up until the very absolute end. And part of why I don’t wanna have to wait for #3!

And next time you see an ice cream truck roll by…

It’s a million-dollar bounty out on Bianca, on an international hit list for every bounty hunter, hit man, and assassin in the world. It’s a spur for Bianca, for there’s no point in waiting for them to surprise her. Instead she’ll take the fight to them, for it’s kill or be killed, and she’s got her finger flush against the trigger.

But as Bianca races to outmaneuver her tireless pursuers, her father loops her in on a job that might just do the trick: recover King Priam’s Treasure, a collection of heavily guarded, priceless artifacts stolen by the Russians during World War II, and return it to Germany.

Impossible? Maybe for some, but a high-risk heist is all in a day’s work for Bianca St. Ives, especially when there’s intel on the line — intel that could finally bring down the shadowy forces seeking to bury Bianca for good.

Faced with threats that circle closer with every move she makes, she knows the stakes have never been higher, but when you’re already living on borrowed time, you have to hustle if you want to live to see tomorrow.

Bianca St Ives, a.k.a., Sylvia, still sees herself as a real person, not a genetically enhanced test-tube baby. She’d been Nomad 44 in the Nomad Project. The only survivor of forty-seven murdered babies. Okay, so she does have enhanced strength, intelligence, and stamina, but she’s still a regular person with her public persona running a security consulting firm, Guardian Consulting, in Savannah, Georgia. (Hoover Investment Group takes up the other half of the fifteenth floor.) Sarah Bowman is her cover for Macau until she becomes Ann Brabourne, a Canadian artist who slips into the identity of Kangana Bhatt. Doc is Tony Gatti, a restaurant manager, who becomes David Cohen, a car salesman from Detroit.

The five-month pregnant Evangeline “Evie” Talmadge is Bianca’s best friend from their Swiss boarding school days. She’s divorcing her jerk of a husband, Fourth, a.k.a., William Wentworth Thornton IV, and living with Bianca as well as working as Guardian Consulting’s receptionist. Her divorced parents — Rosalie hates Bianca — are totally against her dumping Fourth.

Haywood “Hay” Long is ex-military, a former cop, and has been friends with Bianca and Evie since they were children. He’d really like to get to know Bianca so much better. Evie set him up with Grace Cappy for that “damned historic thing”, the Historic Savannah Auction and Gala of which Evie is a co-chair.

Doc, a.k.a., Miles Davis Zeigler, is a twenty-five-year-old computer genius whom Bianca rescued from the Bahrain debacle. Now he’s her head of cybersecurity.

Cambridge Solutions is…
…the company formed with another disaffected spy and Colin Rogan, former MI6 (and former SIS, a more secret organization within MI6, known as the Increment, specializing in the most clandestine black ops missions) currently an independent contractor. Fergus Benchley is one of three employees who go to Macau, all former British SAS.

Quincy and Bianca have had previous dealings with Snake, a.k.a., Shawn Torres, a bullying eighteen-year-old member of the Bloods.

Mason Thayer, the man whom she had thought was her father — Richard St Ives, is a renegade CIA agent, an assassin sent to kill her and her gestational mother, Issa, a.k.a., Anissa Jones, a.k.a., Sarah McAlister, who’d had “Elizabeth” for a daughter, and whom “Sean” supposedly killed in a murder-suicide. Adrian Agee is another alias, of a man who likes to gamble. His real family includes seven-year-old Marin, the girl whom Bianca had considered her half-sister, and Margery, both in hiding.

Clients include…
…Cymba International is owned by Les Harper‘s dad. Les is a friend of Fourth’s, and Bianca may have to take one for the team. The Savannah Food and Wine Festival. Monica Prickett with Prickett Construction. Pete Carmel of Carmel Constructions brought four of his site supervisors.

The Circus Nagy is…
…Hungarian with a troupe of circus people who are actually thieves and forgers where Bianca is known as Maggy Chance; Doc will become Bruce. Dorottya, a thief, pickpocket and professional dog trainer, is married to Lazlo. Kristoff (married to Maria) and Franz (married to Elena) are their sons. Bela is their youngest, a daughter. Dedi is the fifth generation and is reduced to playing fortuneteller although she’s still a good forger, and her son Oskar is 6th generation and had been a jewel thief and acrobat. Sandor, the human cannonball, is Lazlo’s brother; Bence and Adam are Sandor’s sons who do a high-wire act. Griff is a monkey. Zoltan is a lion; Zsa and Atila are twenty-foot-long Burmese pythons who will also help on the job. Uletka, Hunor, Magor, Levedia, Eniese, Baba, and Abba are all dogs.

Oskar has a cousin, Patrik Szabo, who works in Nikulin’s Circus in Moscow. Tibor Alexandrovich is the Nikulin assistant manager. Yuri Vladimiroich Nikulin had been a beloved clown who gave his name to the circus.

Interpol is…
…where Colin Rogan is currently working for Laurent Durand to whom he owes a major favor. Durand is the head of the Organized and Emerging Crime Programme which focuses on international criminal networks, multinational organized crime, and illicit markets. Bender is another Interpol agent.

CIA
Special Agent Steve Hanes, who does not endear himself to Rogan in any way, shape, or form, is part of SOG, Special Operations Group, for the really covert shit. Greg Wafford is deputy director of the National Clandestine Service which oversees SOG. Agent Brian Lesce is a newbie, part of the HUMINT sector.

John Kemp is a now-dead CIA assassin. That scumbag, Alexander Groton, is the recently retired head of the Defense Advanced Research Projects Agency (DARPA). He now works sub rosa as a consultant with the CIA. Heiligenblut, Austria, is the location for a CIA-controlled black site, codenamed Granite.

The Direction Générale de la Sécurité Extérieure (DGSE) is…
…the French version of MI6 and the CIA. Agent Henri Moreau teams up with Rogan to see Phillippe Bergere, a high end fence currently housed in the Muret, a prison in the Auvergne. Bergere had once had hopes about Ghyslaine, the owner of the Galerie d’or, a respected Parisian art gallery.

The Bundesnachrichtendienstes (BND) is…
…the German version of the CIA. There’s a deal they want to make with Thayer who will need Bianca to carry it out.

Macau is…
…a gambler’s paradise. Delia is their dealer at the Wynn. Bix is one of the four Australians playing at their table. Novo is the manager. Paulo is one of the guards.

Moscow, Russia, has…
…the Moscow Rules, and It’s important to pay attention to them. King Priam’s Treasure, “priceless artifacts including magnificent jewelry that was fabled to have once belonged to Helen of Troy” had been looted from Berlin during World War II…and the Germans want it back. Shura Federov is an art critic for the online magazine Krasivaya.

Stare Kiejkuty, Poland, is…
…the location of Project Nomad.

The dark web whispers of an all-out [wo]man hunt raging across Europe, the offer posted by Darjeeling Brothers, a.k.a., The Exterminators, middlemen for high-end, professional hits.

Savannah society includes…
…friends of Rosalie such as Mary and Paul Bretton (president of Georgia Sun Bank) while Mary is a partner with Glenda Tandy in a decorating business. Chip Bridgewater is a pawn for Fourth (his family owns a shipping company worth a quarter of a billion). Randall Wallace is president of the Chamber of Commerce. Mark Graham is a wealthy real-estate developer.

That SiuSiu Teng is some tailor in Macau, Frieda’s Fancy Clothing. Designer to the spies, and that garter belt of Bianca’s is quite intriguing. The gatekeeper is quite the important key at the shop. Bianca is known as Julie Taberski at the dress shop; her father, Peter Taberski. Frank Bonville wrote The Little Secrets, a very handy book for cardsharps.

The cover is cold with that bluesy, icy sky over an iconic Moscow skyline with St. Peter’s domes littering away above those freezing waters of the Moskva River. Front and center is a silhouette-like Bianca in her long jacket and pants, a briefcase in one hand and a gun in the other, her long hair blowing in the breeze. Yet, she is hidden behind the author’s name in a slightly embossed white, outlined and shadowed in a black sans-serif font and the title immediately below it in an embossed red, outlined and shadowed in black as well. It’s rather annoying that the best Robards can do is “A Novel” at the bottom. What’s wrong with promoting the series information??

The title is a betrayal, The Moscow Deception, in so many ways and from so many angles. 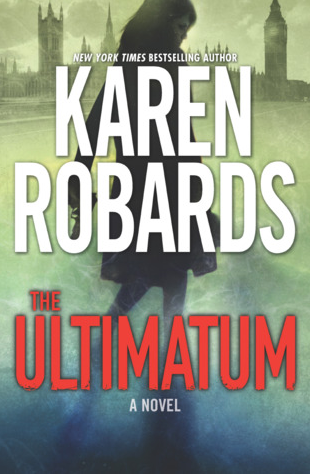 2 responses to “Book Review: The Moscow Deception by Karen Robards”