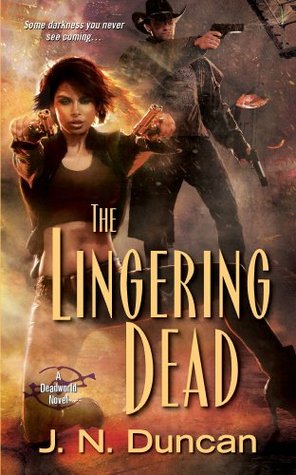 
Third in the Jackie Rutledge paranormal fantasy series that has access to an alternate plane of non-existence and revolves around an ex-FBI agent and her new team of paranormal experts in Chicago. It’s been six weeks since The Vengeful Dead, 2.

The Lingering Dead is all about acceptance, a lesson Jackie must learn, for she has always drowned herself in alcohol and one-night stands, and she has no clue how to have a relationship. With either sex. Duncan has included a number of thoughts and actions that repeat this motif, and it does leave one with hope for the future.

The story uses third person limited with Jackie’s perspective as the point-of-view character. The rest of the characters are on one side of the good vs evil divide with Jackie and her teams quite supportive (with one snarky exception) while most of the townspeople of Thatcher’s Mill are more zombie-like than active. Duncan focuses more on a few characters with Charlie leading the pack.

(I suspect McManus may want to join Special Investigations; they have it too good, lol.)

Most of this story is about Jackie’s conflict within herself, and Jackie is a pain-in-the-posterior protagonist with her intense insecurity. I wanted to smack her around. On the plus side, she is trying. Yeah, yeah, to overcome her issues, too. Most of Jackie’s issues are from her past and is a good example of why it’s a good idea to create a past history for your characters.

Unfortunately The Lingering Dead is a lot of tell with little show, which particularly shows in Duncan’s treatment of Charlie. It’s so detached when he could have created a much more sympathetic link to her character and caused more emotional anguish for the reader. And he could have increased the tension of Nick and Jackie’s relationship so much more!

Some of my niggles include my confusion over what happened to Becca back in 1892. It sounds like she was killed by one person, and then there’s the possibility of another doing the deed. Another “IMO”, is Philip’s actions in the house. Duncan simply lets that go. No confrontation. No “threat” to use it to manipulate Margolin. As much as Jackie hates him, it’d be a great minor conflict to make use of. And how is it that Charlie is so much stronger than Nick or Shelby? That scene did not make sense. And what’s with the comment Charlie makes: “It was more fun when you were alive?” Was Charlie psychotic back then too? And why does Nick want Jackie so much?

Hmm, Nix sounds like he’s going to be an interesting addition to the cast with all sorts of possibilities for conflict and drama. Even though the battle at the end was too forced for my taste. Duncan was getting lazy.

And as whiny as I’m being, I am hoping that Duncan will get around to book #4…I wanna know what Nix gets up to now that he’s loose!

While Special Investigations has been at work for some time, this is the first time it’s allied with the FBI. With Jackie in charge, the team quickly falls into its first cold case: a haunted town in Iowa, holding helpless ghosts in thrall.

The controlling psychotic entity of Thatcher’s Mill will use any means necessary to destroy Jackie and her team, and their only chance requires a deal with the Spindly Man, a Deadworld being stalking her dreams, hunting her every step — and growing ever more demanding for her ultimate sacrifice…

The insecure Jackie Rutledge had been an FBI agent. Bickerstaff is her cat. Laurel Carpenter had been her living partner, a psychic who sensed ghosts, until she died in Deadworld, 1.

The very talented Nick Anderson, a millionaire vampire, has been in law enforcement for over a century (he was a U.S. Marshall in 1892). He’s also the CEO of Bloodwork Industries, a philanthropist, a concert pianist, and a gourmet cook who’s in love with Jackie.

Special Investigations is…
… a private eye firm specializing in ghostly issues with Nick as its owner. Now it’s conniving with the FBI. Cynthia Forrester, a medium, is the team secretary. Shelby Fontaine, a vampire brought over by Nick, had been Laurel’s lover.

FBI: Chicago
Special Agent Ryan McManus is the FBI liaison with Special Investigations. John Belgerman is Jackie’s former boss. Agent Hauser is in charge of the Geekroom. Pat Taggert is a sketch artist. Dr. Matilda “Tillie” Erikson is the office shrink. Agent Pernetti is a jerk.

Jessica Davies‘ home life is nothing to write home about. Petey is a now-ex-boyfriend.

Thatcher’s Mill is…
…the belligerent small town, a village and family firm really, in Iowa, that’s filled with ghosts. Charlotte “Charlie” Thatcher is all that’s left of her original family. Rebecca is Charlie’s twin. Pa-pa is Robert Thatcher, a.k.a., Isaac Larson, and Ma-ma is Beverly Thatcher, a.k.a., Mildred Wilcott…then…

Elton Carson is the cowed, yet foul, police chief. Elinore is the police receptionist. Molly is the waitress at the local diner; Tucker is the cook; and, Tom is a customer. Rachel Crenshaw is getting ideas. Old Man Wilkens is a woodworker. Pratt runs the local drug store. Mr. Peabody runs the furniture store. Dr. Kirby Matthews is on the take.

The Spindly Man — Nixtchapooliomintchoktaleee, a.k.a., Nix — is a green-eyed thing in Deadworld, threatening Jackie and all she holds dear. Nick had been tracking Cornelius Drake, a serial killer, ever since 1862. Detective Morgan of the Chicago PD’s death in The Vengeful Dead forced Jackie out of the FBI.

Philip Margolin is with the Chicago Tribune and will do anything for a scoop. Deadworld is on an alternate plane, and Jackie can open that door to the dead. Carl Peterson, a cop and a.k.a., Bradley Jenkins, had been Jackie’s abusive stepfather. The cold cases include Ms. Rose Shumway.

The cover is a grayed-out brown and oranges of a shootout with both Jackie and Nick firing two guns at once. Nick is in the background and wearing his black cowboy hat (looking more like Yul Brynner from Westworld) while Jackie is, natch, in jeans and a cropped athletic bra-like top with one knee on the ground and the other leg bent and to the side. Being such a practical FBI agent, she is naturally *eye roll* wearing high-heeled boots…it does go with that cropped top. It’s a fast and furious gunfight with all that yellow and pale gray smoke swirling around them. The title and author’s name are in yellow in the bottom half of the cover with the series information in white and tucked in a corner.

The title is a major problem, a side problem, but still bad, as The Lingering Dead point to some BIG problems.