Samuel Johnson is in trouble. Not only is he in love with the wrong girl, but the demon Mrs. Abernathy is seeking revenge on him for his part in foiling the invasion of Earth by the forces of evil. She wants to get her claws on Samuel, and when Samuel and his faithful dachshund, Boswell, are pulled through a portal into the dark realm, she gets her chance.

Also by this author: The Gates, The Creeps

Second in the Samuel Johnson vs the Devil urban fantasy series for kids and revolving around Samuel and his dog, Bosworth, who aren’t in Biddlecombe anymore.

Technically, I know The Infernals (first published in the U.K. as Hell’s Bells) is aimed at children, and adults should not allow this labeling to prevent their enjoying the Hell out of it!

My Take
This was great fun, although not as fabulously funny as the first one, The Gates. Still, it’s the book to read when you’re feeling low and need a good laugh as we go on our tour of Hell. Bits and bobs of lessons learned and friendships treasured emerge here and there amidst Connolly’s rolling snark. There is so much of life that Connolly pokes fun at that you’ll wish you knew other readers with whom you could share whole sections, LOL.

Connolly still makes me ROFLMAO with his chapter titles; his footnote asides about science, history, and the characteristics of people; snarky comments about tinkering being the province of men; how demons get their names; the use of wee in beer; and, oh, so much more.

Those dwarfs…oh, man, I can’t wait to see how they’ll corrupt Shan and Gath! Then the disguises they don…oh my lord, I can’t decide if I want a sundae with raspberry syrup or a double-dip ice cream cone!

Sergeant Rowan believes that “the dwarfs’ criminal behavior was all society’s fault. … mainly because society hadn’t found a way to lock them up and throw away the key.”

Reading about Mrs. Abernathy is like reading about an old lady tottering about, fixing things up but her eyesight’s gone bad, and she’s totally unaware of how inappropriate the decorating is. And she’s so proud of it. And all along you know she’s one of the arch demons of Hell, ROFL.

Those poor policemen trying so hard to do their duty and confounded by the denizens of hell and their buckets of sand, the three-headed one who stole their loudspeaker, the…well, it just goes on and on as the coppers try to hold onto their senses while Hell (and the dwarfs) take them for a ride.

It’s also an introduction to the reasons for Hell. All the souls who are paying for their sins, what must be done for redemption.

The ending is adorable. Well, on the Earth side anyway, as Samuel tries again and happily-ever-afters are sought for those who escape back to Earth.

The Story
Poor Samuel. It seems that Mrs. Abernathy is not done yet with our young hero as Samuel and Boswell get sucked into Hell. Right along with Dan, Dan the Ice Cream Man, a patrol car, and four dwarfs(!).

Hell won’t know what hit it.

The Characters
Samuel Johnson is a young man who has already saved the Earth once. You wouldn’t think he’d have such a hard time asking his adored one, Lucy Highmore, on a date. Although, really, one should wear one’s spectacles at such a time! Thomas Hobbes and Maria Mayer are Samuel’s best friends. Mrs. Johnson is his mother, and she’s a right one.

Nurd, formerly the Scourge of Five Deities, is the demon who helped Samuel in The Gates, using Dad’s Aston Martin to do it. Now he and his underling, Wormwood, are tootling around the back of beyond of Hell. In disguise…*nudge, nudge, wink, wink*…

Mr. Merryweather doesn’t play much of a part in our story, he’s simply to introduce Dozy, Angry, Jolly, and Mumbles, the four dwarfs who bring their own brand of Hell to Earth. Constable Peel and Sergeant Rowan are chasing the dwarfs down when they all enter the blue light. Dan, Dan the Ice Cream Man careers down the same blue light path, music tinkling, and bells jingling. The boy band, BoyStarz, includes Twinkle, Starlight, Gemini, and Phil.

Mrs. Abernathy, a.k.a., Ba’al, is, was?, one of the Great Malevolence’s lieutenants until he screwed up in The Gates. Seems Ba’al is having some identity issues…snicker…

“She had even donned a new dress for the occasion…”

The Burrower is one of Ba’al’s creatures. The Watcher is an even older demon, tasked with aiding Mrs. Abernathy but secretly working for the Great Malevolence. Duke Abigor is one of Ba’al’s rivals, eager to continue Ba’al’s downfall along with Dukes Duscias, Guares, Docer, Peros, and Borym.

Ozymuth is chancellor to the Great Malevolence — whom we know as Satan. A very miserable, angry Satan. Old Ram has been banished to the forest where the Great Oak rules. The Blacksmith is being punished for his pride on Earth. Brompton and Edgefast (he’s new on the job) are the guards at the doorway into the Mountain of Despair. The demons Shan and Gath have been irrevocably changed by their stint on Earth in The Gates, for they are hard at work on their own version of Spigget’s Old Peculiar. Brock is their taster. Ideal since he can “instantly reconstruct himself”. A. Bodkin is version one of the demon-in-charge of the boneyard.

Scientists, typical, willing to end the world if they can but learn something. The Large Hadron Collider should be fine, no leaks. Professor Stefan is the head of particle physics, and Professor Hilbert fancies the idea of alternate planes of existence. Ed and Victor are supposed to be monitoring the Collider in action, when they’re not playing Battleship.

The Cover
The cover is infernally awesome with sculpted white flames that are actually demons writhing up, reaching up to the uneven, bulky edge of a cauldron or the edge of a pit. It’s one that a white silhouette of Samuel is looking over, the red background acting as a foil to force Samuel to stand out. The author’s name fills in that red nicely in black.

The title is what Samuel encounters in Hell, The Infernals are going to war! 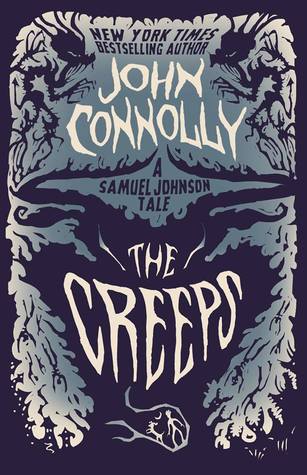 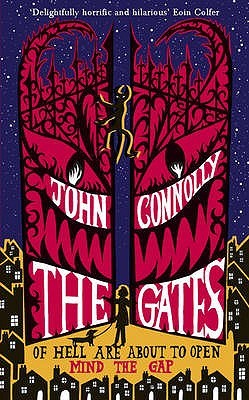 One response to “Book Review: The Infernals by John Connolly”