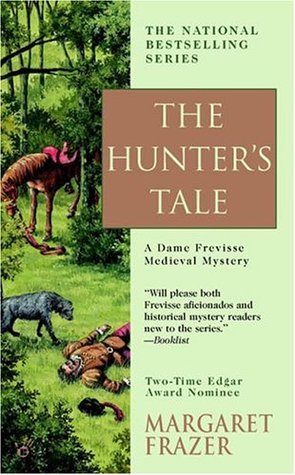 When the vicious Sir Ralph Woderove is found murdered near his estate, Dame Frevisse finds that the evil that men do sometimes does live after them.

Thirteenth in the Sister Frevisse medieval mystery series and revolving around a Benedictine nun with a head for puzzles. The story is set in St. Frideswide’s nunnery in northern Oxfordshire in the mid-1400s.

My Take
Frazer catches us up on what’s happening at St. Frideswide’s along with an unexpected expedition…sigh…it’s a sad tale and difficult for Frevisse as it goes against what normally feels right. And I’m all for the final decision. It’s only fair.

As usual, Frazer delivers a compelling story with characters you love and hate along with a healthy dose of showing us what life was like in the mid-1400s in England from providing food for the table, working with hounds, an insight into arranging marriages, and most importantly, a peek into one small area of law that can have such far-reaching consequences. It certainly makes me appreciate living in our world today.

An interesting look at Hugh’s contemplation of his mother’s bitterness and the threats she made to Sir Ralph. I don’t really see what this particular scene contributed to the story. It’s so sad when a parent is so incredibly horrible, and as Frazer says, a waste of a life.

Frazer sprinkles some tidbits about what the other nuns think of Frevisse’s detecting.

Such a hot mess of betrayal and support. And such a twist of an ending.

The Story
It’s a cruel, hard man who delights in tormenting all around him. So it’s without grief that the family regards his murder. You’d be hard put to find anyone who did feel any sadness. Not even the hunting dogs on whom he lavished such care.

Still the darkness doesn’t lift from this close family, and it gets darker still with another death and a stalking.

The Characters
Dame Frevisse has embraced the cloistered life and would prefer to never leave again. Yet when she’s in the world and confronted by a mystery, it’s beyond her ability to resist learning the why. Sister Johane is her companion on this trip, mostly from her experience helping Dame Claire with the healing side of things. Domina Elisabeth is still in charge; Father Henry is still their priest; also Dames Perpetua, Emma, and Juliana; and, Sisters Amicia, Margrett, and Thomasine who is well on her way to sainthood. Malde is the servant in trouble.

The family
Hugh Woderove, a second son, is probably closest to their father, Sir Ralph, but only because Hugh loves the hounds and hunting as much as his father. Master Basing was the houndmaster before he died. Tom is the heir and his father’s steward. He’s also ready to meet his father yell for yell. Miles is the first grandson and serves as the woodward, hated simply because Sir Ralph hated his son and his wife. Lady Anneys is the rock in all this, coping as best she might. Elyn is the oldest daughter. Lucy is the middle daughter and quite chatty. Ursula is the youngest and staying with the nuns in St. Frideswide. Helinor is the cook while Alson is a kitchen maid. Gib and Duff are servants.

The dogs
Well, they are more important than family, after all. Bane, Brigand, Skyre is not yet trained, Bevis, Sendal, Sudden, Melador, and the pregnant Baude. Degory is the dog boy.

Father Leonel conspires with Tom to aid the villagers. Hary Gefori is the hayward’s son. Lucas is the village reeve.

Sir William Trensal is the best Sir Ralph does as a friend; he’s interested in hunting as well. He’s also one of the executors. He’s married to Elyn Woderove, his second wife and two years older than Phillipa, Sir William’s daughter, who is intended for Tom. Master John Selenger is Sir William’s steward and brother-in-law from his late, first wife.

The Cover
The cover is split vertically with the right half a deep, subdued purple with info, the title, the series name, several blurbs, and the author’s name. It’s the left half that does the pretty with a wooded scene bordering a grassy path on which a horse is grazing and a wolfhound is curious over the man lying in the path.

The title is The Hunter’s Tale, for they went a’hunting, and while one doesn’t return, the rest have a tale to tell.