This book may be unsuitable for people under 17 years of age due to its use of sexual content, drug and alcohol use, and/or violence.
Goodreads
Also by this author: Improper Gentlemen

These short stories appear to be in chronological order…

“La Paloma Blanca” is set in the Old West of the 1860s with two sisters held back by their father from speaking to men at all. Until one night when one sister is caught eavesdropping on the other.

It’s in first person protagonist point-of-view from A__’s perspective. I enjoyed how Whiteside conveyed the manners of the time period.

“Sweet Punishment” uses first person protagonist point-of-view from Catherine’s perspective when she’s caught as a cat burglar, and she must choose between a month of “punishment” from Don Rafael and Ethan Templeton or being returned to her vicious brothers.

It appears to be around the same time period as “La Paloma Blanca”.

“Champagne Cocktail” finds a mob boss’ girlfriend reminiscing about the days when Johnny ran a speakeasy, as well as liked to watch her with others. It’s when war breaks out between rivals that an enforcer strolls into town…the cold Ethan Templeton.

It’s in first person protagonist point-of-view from the girlfriend’s perspective. This is a subtle one…oh, not the girlfriend’s memories, but the way Don Rafael went about winning this war.

“The Great Chicken Roost” is what runs that bullying mayor out of town, after Jean-Michel St Just provides Anne with an amazing night.

This one is so sweet with “Jimmy” such a considerate, polite young man. It’s also quite colorful in the atmosphere Whiteside paints of the town, the time, and Miss Jessie’s. I get the impression this is around the time of the Depression.

“The Storm Cellar” is a story Gran tells Mary while they wait for those peach pies to finish baking. She was twenty-five and had stayed home while her parents flew off to help with a birthing. Then that tornado came…as well as help from an unexpected Don Rafael.

“Peppermint Candy” finds a judge who relates the tale of what she discovered when she first got to college, and how she became enamored of the law. It was Jean-Michel St Just in that pink dress…

“Thirtieth Birthday” finds the professor remembering that thirtieth birthday when he got his ultimate, and dangerous, fantasy fulfilled by his wife, Carol, who experiences that cowboy Ethan Templeton.

“The Morning After” is a morning-after reminiscence by three ladies in New York about the men they enjoyed last night.

The “Spotlight” is on Brynda as she experiences lust on a stage with Don Rafael. Later, she gets a steady job at the Santiago Trust.

“Bourbon with a Splash” encounters a strong woman, a cop who has a free Saturday night since her last day with the metro police is that Friday. And Ethan wants her total obedience, including her wearing the leather outfit he sends her.

“Traffic Stop” is the start of Steve’s relationship with Ethan Templeton when she’s still a metro cop. It was a traffic stop that exposed her to all that was Ethan, and she conducts a very thorough search.

“Apex Predator” is the prequel to Bond of Blood, 1, and features Grania and her first meeting with Don Rafael. Grania’s scientific mind comes to the for as she searches for information on vampires, an apex predator.

Whiteside uses first person protagonist point-of-view from Grania’s perspective. And I do gotta wonder about those Kevlar vests…

The cover is a very close close-up of a man’s water-beaded six pack, shadowed in blue from the top down to the highlight of his lower left. An angled copper wallpaper with a black Victorian-style print borders the left side. The title is in an embossed brilliant metallic blue below the man’s nipple. Immediately beneath that is the series info in a very pale peach. The author’s name is below that in a burgundy script…and danged hard to read. At the very bottom on the left is a testimonial in white.

The title is about the women within who are The Hunter’s Prey. 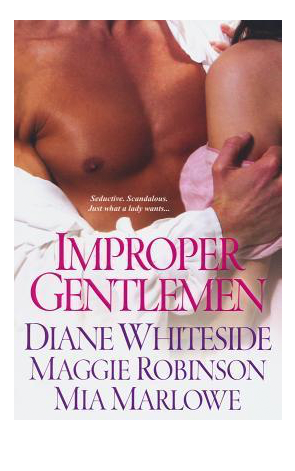