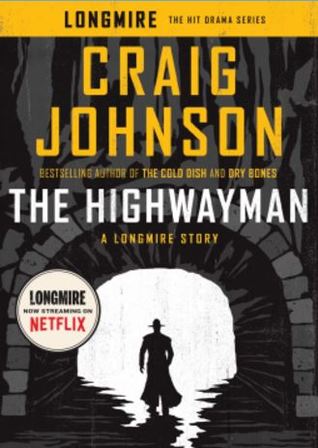 Walt Longmire and Henry Standing Bear are up against a legend, a heroic Arapaho patrolman who met a fiery death in the canyon almost a half-century ago.

Also by this author: Spirit of Steamboat, A Serpent's Tooth, Any Other Name, "Eleven/Twenty-Nine", An Obvious Fact, The Western Star, Depth of Winter, Land of Wolves, The Cold Dish, Death Without Company , Kindness Goes Unpunished , Another Man's Moccasins, "Land of the Blind", The Percentages"

A short story that comes in at 11.5 in the Walt Longmire mystery series and revolving around a Wyoming sheriff in Absaroka County. The focus is on Trooper Rosey Wayman.

There are a lot of little stories in this about Bobby and Indian mythology, as Johnson pulls in Walt’s previous metaphysical encounters when he attempts to explain to Rosey and himself that Rosey’s encounters have a rational explanation…even as Walt doesn’t believe what he’s saying.

On the annoying side, I don’t get why Rosey is so obdurate about the whole situation. So she keeps getting the radio transmission? So those silver dollars are showing up? So what? Investigate the back history. There’s nothing threatening about what’s going, so why does she feel threatened?

Why would the robbers hide their spoils where they did? When did they have the time? As for that moment with the Toyopet and the tunnel mouth, why would they continue to sit there?? Kimama knows what must be coming??

It’s a question of the spiritual. Or a cry for help. Despite Walt’s own experiences, he’s inclined one way, with an ending that goes both ways.

It takes a lot of action and a long time before the truth comes out about Bobby Womack’s actions that night. It’ll make you weep.

Rosey is hearing Bobby’s voice over her radio. Every night at 12:34am. It’s the same thing every time: Unit 3, 10-78, officer needs assistance.

She’s a good trooper, one whom no one wants to lose, so Walt and Henry come up to…chat.

Trooper Rosey Wayman recently transferred over to Troop G within the Highway Patrol to patrol the Wind River Canyon Scenic Byway. As a child, Rosey had lived in Riverton where she had a nanny, Butterfly.

Troop G, Highway Patrol, Wyoming
Bobby Womack was a hero and a highway patrolman. A once-in-a-lifetime man despised for being Arapaho. Now people whisper Heeci’ecihit (The Highwayman). Theona Womack had been his mother.

Captain Jim Thomas is in charge of Troop G. Mike Harlow, a former Marine, used to patrol Wind River Canyon until he retired. Bobby Womack was his revered training officer. Parker has the bladder of a grape. Eunice Wallace is with Central Dispatch Headquarters in Cheyenne.

Walt Longmire, a.k.a., Bucket, has been the sheriff in Absaroka County for years. Henry Standing Bear, a.k.a., the Cheyenne Nation, has been Walt’s best friend since childhood.

Kimama Bellefeuille is an Arapaho medicine woman. Sam Little Soldier had been Bobby’s best friend since childhood; now he’s the local radio expert who supervises the local radio station. Joey is his grandson and knows even more.

The cover is a woodcut style with the deep grays of a rocky tunnel, its arch outlined in stone. In the light at the other end of the tunnel, a stark silhouette of a flat-hat in ankle-brushing duster stands, ready for anything. A band of yellow at the top showcases the series as a television series and also highlights the author’s embossed name and info with the title in white.

The title is who’s behind it all, The Highwayman.

2 responses to “Book Review: The Highwayman by Craig Johnson”