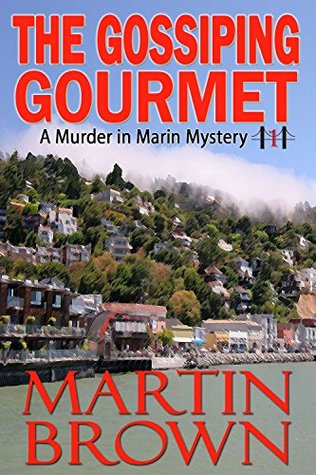 
First in in the Murder in Marin cozy mystery series and revolving around the inhabitants of Marin County in California. It’s not until well into the story that we learn that Eddie Austin and Rob Timmons are the actual protagonists of the series. The focus in The Gossiping Gourmet is in Sausalito on Warren Bradley, gossip columnist and chef.

I suspect I disliked The Gossiping Gourmet because of Warren Bradley and his “partners in gossip”. He’s a victim you’ll love to hate — he’s such a smarmy, mean git. The kind of person I can’t stand. One who interprets every comment as being about himself. I also hate how he twists gossip to influence and hurt people.

Brown starts the story off with a prelude and then flashes back to provide the trail of events that lead to this critical conflict in this primarily character-driven tale. It’s handy that Brown uses a third person global subjective point-of-view so we hear from many of the characters. It helps lay the groundwork for how incestuous this town is!

The hardships Brown lays out about running a small newspaper and the clever ideas The Standard incorporates to stay solvent are fantastic, but I find fault with Timmons letting Warren run amuck. Lost points there…

The path that leads to the inciting incident is a long-building trail of miscommunication, an unfortunately frequent issue in most relationships. Dang it.

In the end, it’s a core group of small town bullies egged on by the reprehensible Warren.

And we learn why Warren lost his hands…poetic justice in two many ways.

It’s a game of know-and-tell gone wrong when Warren’s plans are put on the carpet by Alma Samuels. The brown-nosing Warren is stuck, if he wants to retain his influence in Sausalito!

The petty, mean-spirited Warren Bradley lives for gossip and sees himself as a fabulous gourmet chef who works hard to appear wealthy. Okay, fine…he is a good cook… He writes the “Heard About Column“. Some believe he cheated Mrs Danvers out of her cottage.

Eddie Austin is a lead investigator at the county sheriff’s department. He’s also a longtime best friend of Rob Timmons. Sharon is his wife, and they have a son, Aaron.

The local paper is The Standard published…
…by Rob Timmons, the owner. Holly Cross is his full-time editorial assistant/production manager. Social events in Tiburon, Mill Valley, and the towns in Ross Valley are covered by Sylvia Stokes, Ed Dondero, and Cassie Crenshaw, respectively.

When he was a child, Timmons had a Dalmatian named Smoke. Today, he’s married to Karen Klein, the daughter of a local dentist, and they have a son and daughter.

Grant Randolph, a former very successful gallery owner of The Discerning Eye, is the new chair of the Sausalito Fine Arts Commission. Newly arrived from Manhattan with his wife, Barbara, who gets a job with the Moss Gallery in San Francisco. Anna Ruth Moss is the founder. James Moss is Anna’s attractive son.

Ray and Debbie Sirica, from Chicago, invite the Randolphs to Sausalito and become best friends.

The Sausalito Women’s League, a.k.a.,
…The League, started as support for the suffragette movement. Now it’s the paramount social set with the heartless Alma Samuels, the widow of a San Francisco attorney Roger Samuels, in charge.

Louise Allen is Alma’s caretaker these days, having evolved from maid to cook to caregiver.

The Ladies of Liberty…
…was started and continues to be led by Alma as well. Members include Bea Snyder, one of Warren’s friends; Ethel Landau, who is on the art commission and is a granddaughter of The League founder, Dorothy Landau; Marilyn Williams, who is a charter member and one of Alma’s lieutenants; and, Robin Mitchell, who dominates the city council.

Sausalito Fine Arts Commission is…
…one of the premier committees with Arthur Bingham as the chairperson. The membership of the Gate Six Artist’s Cooperative incorporates promising young artists. Kitty will become one of Grant’s prodigies.

Sausalito PD is…
…too often referred to as “the gang that couldn’t shoot straight” and is the happy recipient of Warren’s attentions. Captain Hans Petersen and his officers include Chris Harding, the newest patrol officer, and Steven Hansen, who is Chris’ partner.

Dave Nichols is an EMT officer. His partner is Hal Michaels. Max Brownstein is the Marin County medical examiner.

Smitty’s and the No Name are two bars that the locals patronize. Alberto is a bartender at the No Name. Past artists of Sausalito included Jean Varda, Shel Silverstein, and Gordon Onslow. Oscar and Clarice Anderson are the Randolphs’ neighbors. Bob Ivan is an attorney. Alex and Trevor were boyhood friends of Eddie’s and Rob’s. Robert Allan, recently elected to the city council, and Carrie Kahn had been some of Warren’s victims. Mollie Stone’s Grocery sounds tasty. Patricia Smith, a dot-com CEO, and her husband, Mario, move to Sausalito.

Flagstaff, Arizona
William Benedict used to work at Northern Arizona University and lived with Elaine Hayden. Hayden had a son, James, and a foster son, Topher, who got chewed up by the defense lawyer.

The cover is a glorious summer day looking back from the Bay at the house-studded hills of Sausalito with a blue sky above and the muddy green waters below. The title (in sans-serif) is at the top in a white-outlined red with the series information below it in black. Brown’s numbering for the series, included between the icon of the Golden Gate Bridge towers following the series title, is a clever device. The author’s name is at the bottom in a serif font in red with a black outline.

The title is all about The Gossiping Gourmet who simply can’t resist his Machiavellian embellishments.

4 responses to “Book Review: The Gossiping Gourmet by Martin Brown”