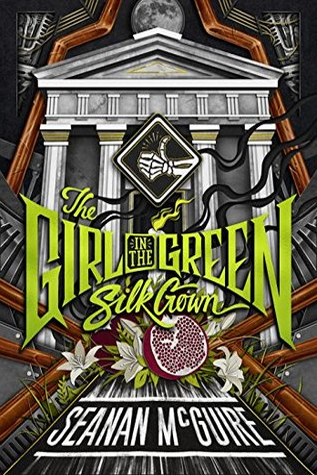 Buy on Amazon
Goodreads
Also by this author: Chimes at Midnight, Indexing, The Winter Long, The InCryptid Prequels, Pocket Apocalypse, A Red Rose Chain, Reflections, Once Broken Faith, "Dreams and Slumbers", Chaos Choreography, Magic For Nothing, Indigo, Every Heart a Doorway, The Brightest Fell, "Of Things Unknown", Beneath the Sugar Sky, Night and Silence, "Suffer a Sea-change", "The Recitation of the Most Holy and Harrowing Pilgrimage of Mindy and Also Mork", Tricks for Free, That Ain't Witchcraft, "The Measure of a Monster", The Unkindest Tide, "Hope is Swift", Come Tumbling Down, Imaginary Numbers, "Follow the Lady", "The Fixed Stars", "Forbid the Sea", "No Sooner Met", Across the Green Grass Fields

I enjoyed the premise of the story, but McGuire really padded it out with all of Rose’s whining. It certainly did ram her distress home for me, especially as she’s using first person protagonist point-of-view. Whew.

It is an amazing world that McGuire has created with all its rules and role-playing characters, among the living and the dead. And it’s not only the people who are ghosts, but diners, roads, and more that still retain a presence. There’s certainly a sense of the past in The Girl in the Green Silk Gown, as Rose discovers the many changes since she died, from Mercurochrome to the ease of flying.

It’s Rose’s first-ever plane ride, her first trip out of the country, and she’s terrified of it all. Be aware that her perspective on all the things the living experience is negative. What terrified me was when she starts to become tempted and is whining on about Gary and his choices, her own loss of possibilities.

What’s funny is how much Rose hates being alive. She is so grossed out by daily living, and yet she does make you think of all the humdrum, daily events we go through each day. It’s…just not a perspective that’s very pleasing. There’s also the matter of being alive in a world of formal IDs, the TSA, and the power others have over someone who looks like a teenager.

There are some sad parallels that run between Rose and Gary and Laura and Tommy. Both sides obsessed but different sexes in different worlds.

Ooh, ick, Rose claims the NSA knows all about ghosts. Makes the mind boggle as to what they could do to, er, with them.

Interesting conflicts arise from Rose’s resurrection: her tremendous power that threatens Apple, the horror of Gary, the realization that it has been 60 years(!) and what do they really know about each other, the slow dawning of possibility in being alive, the difference between saving and helping, and the discovery of a world she never got to explore.

It’s good versus evil and love for family and friends that can get all mixed up.

Rose Marshall is the one who got away, and Bobby Cross can’t have that. It’ll be even sweeter since her prom date finally found a way to join her in the twilight.

But now Rose’s tattoo is damaged, and Rose must quickly find a way to repair it lest she be forced to stay in the land of the living. It’s wrong. It’s all wrong. Rose has been sweet sixteen for more than sixty years, hitchhiking her way along the highways and byways of America. She’s been dead longer than she was alive. She knows nothing of this world, and…

Bobby has forced her out of the twilight, where Rose is vulnerable.

Rose Marshall was 16 when she died in 1952, sixty years ago on prom night when she was wearing her green silk gown. It’s one reason they call her the Phantom Prom Date or the Girl in the Green Silk Gown. Now she’s a hitcher because she died on the road that night. Every once in awhile, she’s a psychopomp, escorting someone she knows. Rose also has a connection to the Prices from Incryptid.

Gary Daniels had been Rose’s high school boyfriend. One of the popular boys, and the boy who tried to save her and has loved her for the past sixty years. He moved Heaven and Hell to be able to be with her now.

Emma is a beán sidhe who had been attached to Amy and who now manages the Last Dance, a diner and a mile marker for ghosts. Go past it, and there’s no guarantee you can turn back.

Tommy’s girl is Professor Laura Moorehead, a premier folklore scholar who knows Rose in depth, who hates Rose for what she thinks Rose did, and has already tried to hurt her. A mechanic and racer, Tommy is a phantom rider who loves the road and loves his car, and he’s waiting for his love.

The routewitches are…
…ruled by Apple, a teen-age looking Asian American who ran from a Japanese concentration camp in America during World War II. The Ocean Lady is their goddess, the former Atlantic Highway, the first and greatest of the American highways, who was traveled so often and for so long that she became aware. Paul is paying for his challenge. Siobhan “Bon” Kavanaugh, eldest daughter of Richard and Jill and mother of two children: Donal and Minerva, was the woman at the boundary. Dana had been the routewitch Bobby suborned. Carl is a hybrid, a routewitch and an umbramancer, who just wants to rest. Trainspotters are routewitches of the rail.

London is…
…where the Elgin Marbles are. The goth Pippa is a Dullahan, a being just like the beán sidhle, predators who are neither alive nor dead, cousins to the reapers, whose heads are living and parasitic, operating someone’s stolen, modified corpse.

Robert “Diamond Bobby” Cross had been one helluva an actor back in 1938. Only he traded it all away to live forever, as long as he can cram souls into his gas tank. Angie Mayhew had been one of the many actresses whose careers he boosted.

Becky had been Rose’s horror of a niece who had summoned her for Bobby Cross; now she’s a crossroads ghost, as is Mary Dunlavy, a quasi-friend Rose knows through the Prices. Corletta is a homestead who wants Rose to stay with her. June Harty lives in Buckley Township in Michigan and gave her collection of Rose Marshall stories to a publisher. Molly is a waitress at a truck stop. Michael had been a sweet boy in a group of ambulomancers in San Francisco. Katherine Lewis is a waitress at Hurry Up and Dine in Medford, New Jersey, who knows you don’t pick up hitchers.

The Barrowmans live…
…on a farm, have ambulancer blood, and are trusted by Apple. Violet is the mother, Holly is five, Willow is missing, and Matthew is the dad. Of the dead who come back, Jimmy is a cocky high school football star who died a week ago, and Salem is upset with the rules.

The Underworld is…
…from Greek myth where Persephone is a goddess and married to Hades. Orpheus was the son of Calliope, one of the Muses; the adopted son of Apollo; and, the husband of Eurydice.

The twilight is where dead folk go about their lives, not ready to move on. The next level down is starlight, and below that is midnight with sub levels in between. The ghost roads connect them all, including the living. Halloween is when the veil is thin, and ghosts can pay for a chance to live again.

A routewitch is a living person who works with the magic of distance and has a bond with the road, any road. An ambulomancer reads the future in the roads, allowing them to always see what’s coming and prepare. An umbramancer is a fortune-teller or soothsayer. Never make a deal with a crossroads; all they want is to take what you treasure most.

There are all kinds of beings in the twilight: haunts, homesteads who love their home and their lands, ever-lasters who are the spirits of children and teens who don’t like the idea of an afterlife and keep going to class, white ladies are those abandoned or betrayed, and more. Those who die in a car wreck come back as hitchers, phantom riders, homecomers who are sad and confused and tend to try and kill good Samaritans who try to help them go home, and coachmen. Rail ghosts had been trainspotters while those who die at sea become sail ghosts.

Whoa, that cover is electric…and busy! In fact, it’s a good thing the title is in that bright yellow green or you’d never find that squeezed-in title that looks like a slingshot about to be released. It is a veritable mish-mash of Rose’s destination, the Greek temple, the asphodels, and that pomegranate. I do like the author’s name (in a distressed white font) screaming down the road Rose must follow. That diamond-shaped sign in the middle with the skeletal thumb up in that universal signal for hooking a ride was pretty funny.

The title is all about Rose, The Girl in the Green Silk Gown, who only wants to come home.

6 responses to “Book Review: The Girl in the Green Silk Gown by Seanan McGuire”