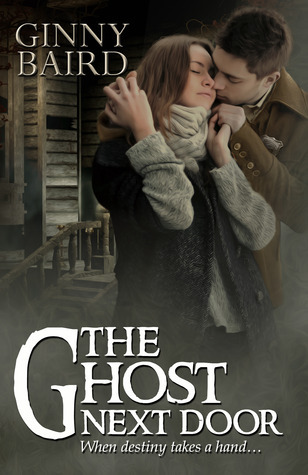 
First in the Romantic Ghost Stories paranormal romance series and revolving around Elizabeth Jennings and her daughter, Claire, in Blayton, Virginia.

The story focuses on romance: Elizabeth and Nathan’s and Claire and Perry’s. Very cozy, very sweet with an ending I would never, ever, have suspected.

The Ghost Next Door is a combination of characters and action with an amazing town where everyone knows each other. Where people tend to leave without warning. A place where Elizabeth feels “at ease and alive”. A place with a reason for people to come here and heal.

And we learn what some of the townspeople need for healing through third person global subjective point-of-view, which allows us to listen in on the thoughts and feelings of a number of characters — Melody’s need for mean is the most negative.

Considering that ending and the difficulty in getting communications in from outside Blayton, how exactly did Nathan hear about the place from Bernie or find out that Belle and Melody had moved here? How does Elizabeth’s company know about the Gazette? No, I want, no, I need, Baird to make this more believable. Sure, it didn’t become unbelievable until the end, but I do not like being broadsided.

I do like Elizabeth’s policy of only being nice. It’s a hard row to hoe, but reaps the best harvest.

Three graves? Not five? Not seven?

It’s a request Elizabeth can’t ignore. Her boss wants her to revive Blayton’s town newspaper. Worse, the house they rent is across the street from a cemetery and next door to an abandoned (and ghostly) Victorian. Nor is Claire happy about being uprooted.

Then creepy things begin to happen next door. Claire is being bullied in school. And the sheriff bakes the most amazing chocolate chip cookies.

Elizabeth Jennings is a journalist assigned to restart the town newspaper by her news organization (based in Richmond and Jerry Walker is her boss). Claire is her fifteen-year-old daughter who writes stories and songs. Cash Jennings left them twelve years ago. No loss, he turned into an alcoholic with a temper. They move in next door to the old Fenton place where Phantom, the cat, appears.

The easygoing Sheriff Nathan Thorpe is a renowned baker. Martha Holt is the dispatcher, the extremely bored dispatcher. Nathan’s librarian sister, Belle, has a troubled (bullying) daughter, Melody. Tony Richards had been Belle’s husband. Nathan and Belle’s dad had been a highway patrolman, shot in the line of duty.

Lexington “Lex” Holt is Martha’s husband and runs the only communications firm in town: satellite TV, Wi-Fi, broadband, etc. The Wilcutts bought the old mill store and turned it into a pool hall/saloon. Bob Robeson is a realtor; his wife runs a daycare. Janet Campbell — who gets funny feelings, has premonitions, and sees auras — runs the Dollar Store and is married to Deputy Sheriff Bernie Campbell. More townspeople from the past, the present and in the future include the Daniels, the Rileys, the Parkers who suddenly disappeared with their toddler son, the Carletons, Emma Gray and her mom, the Baileys and their Irish triplet sons who are into mischief all the time, and Alex Marshall who’s moving here with his eight-year-old son, Winston, who is a new deputy. Monica is also a librarian.

Claire’s fellow ninth-grade students include Joy Holt (Martha’s daughter), the even meaner Penelope, and Lilly who gang up with Melody. Mr Harris is a teacher or principal?? Mrs Peabody is uptight and prone to yelling.

The older Perry lives with his uncle Dan, a former Marine who did two tours in Iraq and now owns an apple orchard.

Betsy Jean has been a friend of Elizabeth’s since high school.

The cover is both sweet and spooky! In front of steps leading to a porch badly in need of painting, the winter-clad Elizabeth and Nathan are embracing, her back to his front. All the text is in white and left justified with the author’s name at the very top and the title starting below their waists. An epigraph is in italics below that.

I have no idea where the title comes from. It’s not The Ghost Next Door, but the “haunted” house that’s next door.

4 responses to “Book Review: The Ghost Next Door by Ginny Baird”