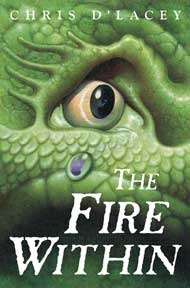 The Fire Within by Chris d'Lacey
Published by Orchard Books on May 1, 2005
Pages: 340
Format: Hardcover
Source: the library


First in The Last Dragon Chronicles paranormal fantasy series for young young adult readers and revolving around clay dragons who aren’t quite so still.

NOTE: The Last Dragon Chronicles are a sequel series to The Dragons of Wayward Crescent. I haven’t read the prequel series, and I suspect doing so would make more sense of The Fire Within.

This is a weird blend of writing with a bent toward the mythic with d’Lacey’s references to the King Arthur tales. His primary protagonist appears to be David who is in college, i.e., he is of college age which normally indicates a New Adult target audience. However, it is possible that Lucy is meant to be the primary, even if the story is really more about David. Then again, the series is about dragons, so perhaps the humans are peripheral. I can only believe that d’Lacey intends this book for the middle-grade reader or a young young adult reader. Definite points off for the confusion.

D’Lacey does get points for originality. I love his premise about Elizabeth and the dragons. He teases us as we read, and never does conFIRM what we know. And it makes me want to read on to the next in the series, Icefire, but not as much as my wanting to go back and read that prequel series!

I love that humorous hook at the start with David replying to the ad Elizabeth placed. The whole idea of those clay dragons is lovely, and I want one. Lucy, however, is not so lovely. She’s such a demanding thing. Yes, I suspect she’ll grow up to be a fascinating adult, but right now she bugs me.

As for point-of-view, I think it’s a simple third-person subjective, as we only have access to David’s thoughts, including that epiphany he has towards the end. As for d’Lacey’s “sly” hints about the dragons, yep, flashing arrows, every one of ‘em.

It’s a tale of fantasy that sets David’s world on end while Gadzooks’ influence will change it.

When David moves in with Liz and Lucy, his notions about the world are tilted as he learns more and more about dragons. Especially about his very own story-writing dragon, Gadzooks.

Don’t ever make your dragon cry, it can put out his fire. If it isn’t quickly rekindled, he will die.

Twenty-year-old David Rain, about to start a geography course at Scrubbley College, needs a place to stay. Winston is his teddy bear. Gadzooks is the dragon David receives. Snigger and the Nutbeast is the story David writes.

Elizabeth Pennykettle, a potter, lives with her about-to-be-eleven years old daughter, Lucy, on Wayward Crescent. Pennykettle Pots and Crafts is her business. The Dragons’ Den is the room forbidden to all. Bonnington is the cat. Lucy has two of her mom’s dragons: Gawain, the last real dragon in the world, and Gwendolen. Gruffen, a guard dragon, is always in the wrong place. Guinevere is Liz’s special queen dragon.

Conker is the one-eyed squirrel Lucy is worried about. The other squirrels who left when the tree came down include Ringtail, Cherrylea, Shooter, and the battling Birchwood. Gadzooks will name Snigger, the squirrel in David’s story.

The Wildlife Hospital is…
…on a farm (it includes a riding center and sells organic produce) outside of Scrubbley where Sophie Prentice is a wildlife volunteer. Her dragon will be Grace. Major is Sophie’s favorite horse. Mrs. Wenham runs the hospital. Mr. Deans is the vet.

The cranky, ill-tempered Henry Bacon is their neighbor and works at the Scrubbley Library. George “Greenfingers” Digwell is the cranky library gardener. Caractacus is the vicious crow.

Brian Donnelly of Donnelly’s Pest Control Services is the father of one of David’s friends. Friends at Lucy’s party include Christopher Jefferson, Beverly Sherbon, and Samantha Healy. Gwilanna is the old outcast crone.

The cover is a subdued yet bright green in that close close-up of Gadzooks’ sculpted features, specifically a CLOSE view of his upper lip, eye, and eyebrow ridge. The metallic gold touches in the crescent sliver in his soft yellow eye and the highlights on his brow and the scales beneath his eye add to the fantastical. The author’s name is way at the top in a shadowed gold while the title is less visible at the bottom in a ragged font gleaming in metallic gold.

The title is what gives the dragons life, The Fire Within.

One response to “Book Review: The Fire Within by Chris d’Lacey”