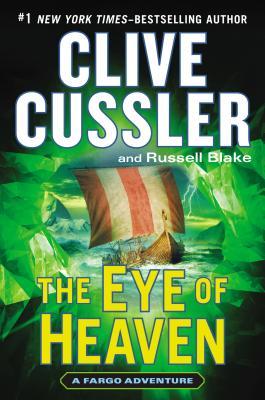 Goodreads
Also in this series: The Mayan Secrets

Baffin Island: Husband-and-wife team Sami and Remi Fargo are on a climate-control expedition in the Arctic, when to their astonishment they discover a Viking ship in the ice, perfectly preserved—and filled with pre–Columbian artifacts from Mexico.

How can that be? As they plunge into their research, tantalizing clues about a link between the Vikings and the legendary Toltec feathered serpent god Quetzalcoatl—and a fabled object known as the Eye of Heaven—begin to emerge. But so do many dangerous people. Soon the Fargos find themselves on the run through jungles, temples, and secret tombs, caught between treasure hunters, crime cartels, and those with a far more personal motivation for stopping them. At the end of the road will be the solution to a thousand-year-old mystery—or death.

Sixth in the Fargo Adventure archeology suspense series and revolving around Sam and Remi Fargo. The focus is on a Mexican treasure.

I’ve been complaining the last couple of Fargo Adventures about the writing. This time around, I’m complaining about how blah and dull The Eye of Heaven is. The writing is okay — that prologue really made me feel the cold, the hunger, and the fear — but the action is formulaic and…boring.

It’s the usual prologue, setting up the Vikings as the treasure leavers. It is, however, extremely vague in background information.

We’re introduced to the big bad boy with that initial treasure hijacking attempt, just so we’ll know how big and bad he is when we get to the primary storyline.

How stupid are Sam and Remi? They already know Benedict will stop at nothing, that someone on the Bermudez must be a mole, and yet they don’t question that necklace? Heck, even I could see who was the leak. And how Benedict kept finding them, *eye roll*. Then there’s that fabulous house of theirs with all the latest security…and they don’t take into consideration eavesdroppers?

The joking between Sam and Remi is cute, and a touch more believable than it was in The Mayan Secrets, 5, although it has a nasty edge to it. I keep thinking they’ll end up separated, it’s so mean.

Huh what? Remi knows Selma so well? Can see she’s in a lot of pain? And she’s surprised to learn that Selma has to go in for hip surgery? Where has she been while Selma’s been dealing with all this pain? ‘Cause I know this pain didn’t come up overnight.

An interesting take on the origins of Quetzalcoatl.

I guess I keep reading this because of the archeology and the Fargos’ free-spending generosity, helping their friends and making it possible for hard-pressed academics and scientists to preserve history…and I do have a passion for history.

This story? I’m not sure you want to waste the time reading it. It’s kind of a wanna-be James Bond up against a wanna-be SMERSH *more eye rolls*.

It’s an unexpected discovery frozen in one of the bays on Baffin Island that sets the Fargos down a path that will lead them to the truth behind Quetzalcoatl and turn Toltec history and the world on its ear.

Sam and Remi Fargo are retired and wealthy with a fascination for archeology. They employ a small staff who work out of their fabulous home in La Jolla, California: Selma Wondrash as their chief researcher with contacts everywhere while Pete Jeffcoat and Wendy Corden are junior researchers. Selma is also going in for a hip replacement surgery! Kendra Hollingsworth, Selma’s niece with a double major in computer science and history, will be her replacement while she’s recovering. Zoltán is their alert German shepherd whom they adopted in Tombs, 4. Since The Mayan Secrets, the Fargos have acquired a Gulfstream jet with Brad Sterling and Rex Fender their pilots and Sandra is their flight attendant.

Mexico
Carlos Ramirez is a friend of Selma’s, and he’s in charge of the Antiquities department in the National Institute of Anthropology and History in Mexico City. Dr. Maribela and Dr. Antonio Casuela are sister and brother and experts on the Toltecs.

The Los Zetas cartel…
…deals drugs and weapons. Ferdinando Guerrero is the Mexico City chief of the cartel.

Cuba
Dr. Lagarde is one of Selma’s friends in Cuba. Professor George Milhaupt is at Cal Tech and has an interest in cryptology; he believes Lazlo Kemp is the Fargos’ best bet.

Rubin Haywood is with the CIA.

Lazlo Kemp got caught and now has to reinvent himself. Unfortunately, his predilection for drink is getting in the way.

Baffin Island and the Viking ship
Commander Wes Hall is heading up a U.S. Coast Guard-sponsored expedition aboard the Alhambra to explore the island’s fjords. Lieutenant Ralph Willbanks is Hall’s first officer. Rick is the pilot who gets them there.

Warren Lasch had headed up the recovery of the CSS Hunley back in Lost Empire, 2. Dr. Jennings works in Montreal and is one of Canada’s top archeologists.

The expedition off the coast of Cartagena, Spain
Dominic is the captain of the Bermudez and the leader of the Spanish team of divers.

Janus Benedict is a wealthy arms dealer with legitimate businesses in banking, insurance, and real estate and has a connection to stolen artifacts. Reginald is his dumb thug of a younger brother. His conspirators include Pasqual, Andrew, and Sergei. Percy is one of Benedict’s go-to boys for skullduggery

Quetzalcoatl is the feathered serpent god of the Aztecs; the Mayans called him Votan.

The Vikings in 1085 AD
Vidar is the captain’s first mate on the Sigrun.

The cover is green! A Viking ship sailing, literally, through an emerald-cliffed sea, a flash of lightning in the background. The title is in yellow with the authors’ names in white — Cussler’s name is WAY larger than life with Blake’s name a tiny add-on.

The title is the focus of this story, The Eye of Heaven.

2 responses to “Book Review: The Eye of Heaven by Clive Cussler & Russell Blake”