The Emperor's Wolves by Michelle Sagara
Series: The Wolves of Elantra #1
Genres: Fantasy
Published by MIRA on October 13, 2020
Pages: 496
Format: eBook
Source: my own shelves

Buy on Amazon|Buy on Audibles
Goodreads
Also in this series: Sword and Shadow

Also by this author: Cast in Sorrow, Cast in Flame, Cast in Honor, Cast in Flight, Cast in Wisdom, Cast in Deception, Cast in Oblivion, Sword and Shadow

First in The Wolves of Elantra fantasy series (and 0.1 in The Chronicles of Elantra series) revolving around Severn Handred, the Wolf first assigned to work with Kaylin Neya in Cast in Shadow, 1.

Sagara has, er, had been making me wonder about Severn and how he ended up with the Wolves. Now, at last, we get to find out.

I love that we learn more about Kaylin’s background from Severn’s perspective. How her mother gave him a safe place and what he did for them and for Kaylin when Tara died.

It’s an interesting puzzle Sagara has set with the emperor setting up these Halls of Law to protect humans, a race considered little better than animals by dragons, Barrani, and shifters. For Elluvian simply doesn’t get it, why the emperor would want to protect them and Severn’s actions give him a bit of insight.

Hmm, Sagara is setting up a mystery around Severn, and I’m’a wonderin’ if there’s gonna be a prequel to this prequel! That boy knows more than he should — language, weapons skills — even if he doesn’t know how he learned so much. I love that he doesn’t back down. He pushes. He pokes.

I also absolutely love how Severn — Sagara uses a third person global subjective point-of-view with the primary perspective coming from Severn — approaches the Tha’alanari. That boy always surprises, lol. It’s such a sweet relief for the Tha’alanari what with the threats they’ve endured from everyone else.

The way the other Barrani treat Elluvian gives you a good idea of how their race works. Oy.

We do get a succinctly summarized history on An’Teela, and a lot quicker than the slow reveal we get in The Chronicles of Elantra, *grin*. She is a power! I am dying to read how an encounter goes when Severn meets Teela!

There are many tensions in this from the tricky games of the Barrani court, the tests set for Severn, the questions of the past, their fears . . .

“If we accept that power is the only legitimate ruler, nothing changes. We are valued only in that we are useful to the powerful.”

I know, Sagara tends to write in a roundabout way, keeping you guessing and wondering what’s going on, and it certainly keeps my brain engaged!

She’s created an intricate world with different customs, eyes that reflect the emotions of certain races, histories of each with their attendant hates and fears, and pulls it all together through Severn, helping us to see them through his eyes.

It’s a mystery with action that’s more of the intellect than via muscle with a cast of characters you can’t possibly expect.

And it’s a lack of information that can lead to so much horror.

A young orphan dedicated to his survival, young Severn Handred has crossed the river Ablayne, tracking a Hawk patrol — a not insignificant feat to go otherwise undetected — that finds Elluvian intent on recruiting the boy.

In order to become a wolf — even on probation — Severn must face the investigators most dreaded throughout the Empire: The Tha’alani, readers of minds. No secret is safe from their prying, no knowledge can remain buried. But Severn’s secret, never shared before, is not enough to prevent the Wolves from adopting him as one of their own. All men have secrets, after all.

Severn’s first job will be joining a hunt, but between the treacherous politics of the High Court, the almost unnatural interest of one of the Lords, and those who wish long-held secrets to remain buried forever, the trick will be surviving it.

And all due to a Barrani wanting a sense of belonging, the warmth of acceptance.

Elantra, the heart of the empire, was created to watch over the seven fiefs. Dariandaros of the Ebon Flight is a dragon and the emperor of Elantra. Each dragon finds a hoard, and the emperor’s is the city and the empire. I think the Dragon Flights were the dragon armies.

Severn Handred is a child of the fiefs who continues to protect Elianne.

. . . divided into three divisions: the Hawks, the Swords, and the Wolves.

The Imperial Wolves are . . .
. . . shadow executioners for the emperor who do not operate in secret, although some do retrieve escaped criminals to bring them to trial. Elluvian of Danarre, a Barrani and considered a friend by the emperor, still has no idea why the Wolves exist — and he’s chosen them for centuries. Helmat Marlin is the Lord of Wolves, in charge of them. Renzo had been a Wolf until he went too far. Other Wolves include the now deskbound Rosen, the skilled but still immature Mellianne, Jaren, and Darrell, who had delusions of grandeur but allowed himself to be goaded.

Dogan Sapson is a witness in jail. Jenson was an unfortunate witness.

The Imperial Hawks are . . .
. . . the police of Elantra and led by Lord Grammayre, an Aerian. Lord An’Teela of the Barrani High Court, who carries Kariannos, one of The Three, is also a Hawk. Her partner is Tain of Korrin, another Barrani. An’Tella has taken under her protection a young girl marked as Chosen, Kaylin Neya. Sergeant Marcus Kassan is a Leontine who mans the desk.

Nightshade is . . .
. . . is one of the seven fiefs in Elantra and is ruled by Lord Nightshade, Calarnenne, who carries one of The Three.

Tara had been Elianne’s mother who died eight years ago when Elianne had been five. Jade and Steffi are those children whom Elianne brought into their little family. Benito, the son of a man who let them steal food, also had the marks, and he died. Tina was next. Then Anali, Amal, Shardan, Lina . . .

. . . a race of natural telepaths with a group mind, forced to work for the emperor. The traitorous Adellos Coran’alani is the castelord. The Tha’alanari are a group of Tha’alaans who have demonstrated an ability to keep their thoughts from the group mind. Some of those who are Tha’alanari include Garadin; Scoros, who had taught Ybelline; Timorri, one of the emperor’s examiners, who became disabled; Draalzyn, who works in Missing Persons; and, Ybelline Rabon’alani, whom we meet while she is still heir.

. . . nearly immortal and see themselves as superior to all others, and do they ever curse being ruled by Dragons. Their children are raised with the ambition to gain power, playing games that include murder. Their High Court is led by the High Lord. The West March is Barrani but not part of the emperor’s hoard. An’Tellarus is ancient and powerful with many regrets. She also suspects Verranian of something to do with Severn. Hmmm . . . A possibility that Severn is an answer to her search? Corvallan is of the line Mellarionne, a younger cousin of the current An’Mellarionne. His wife, Cassandre, is of the line Casarre. Today’s An’Sennarin is an elementalist with an affinity for water.

Who’d’ve thunk? Even the humans have a caste court. Lord Montrose is one of a limited number of lords who preside over the human caste court.

Evanton is the Keeper of an elemental garden, the Keeper’s Garden, on Elani Street. The Arcanum is an ancient institute that predates the Empire where magic is studied. Their Imperial Mages serve the Emperor of whom Johannes is one.

Layan was the first victim. Teremaine had been the instigator.

Master Sabrai is in charge of the Oracle Hall where Random is an Oracle. Tessa, Jerrin, and Tobi are Tha’alani children. Ollarin, a.k.a. Sennarin, is a Barrani who visited Random. Teremaine had been the instigator.

The cover is soft in a nearly transparent beige of a mountain range with a deeper brown dovetail banner with its bottom split into two points hanging from a thick rod held up with tasseled cords suspended from a wolf’s head in profile. On the banner is a building skyline with an Asian feel, pink clouds behind it, and a full moon glowing behind it all. At the top is the series info in brown with a double horizontal line below it, also in brown. The title, in black, begins halfway down the banner. Overlapping the flapping left tip is an info blurb in brown with the author’s name immediately following in black.

The title is our introduction to The Emperor’s Wolves and its latest recruit. 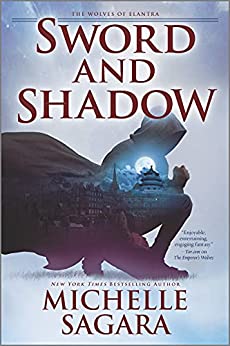