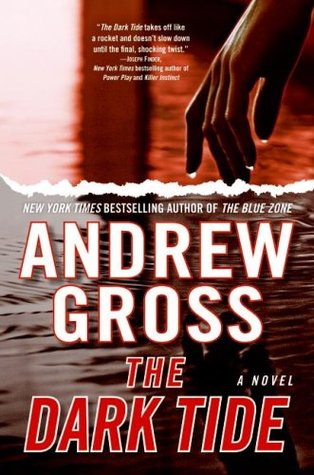 First in the Ty Hauck thriller series — this one’s financial — and revolving around a woman mourning her husband with a suspicious Ty investigating in Greenwich, Connecticut.

In 2009, The Dark Tide was nominated for the ITW Best Thriller of the Year.

Okay, I knew how it would end. It’s a plot type that is so common, but for me, it’s always the journey. How the author takes us from the start to the conclusion and what the characters encounter along the way, as you never do know what a writer will do.

And Gross kept me busy. I couldn’t turn the pages fast enough! People spoke to me [in the real world]. They had to poke or scream to get my attention. Buggers. Can’t they see I’m busy!?

Using that third-person multiple point-of-view, Gross gives us the scoop on what different characters are thinking or doing. Very useful with that unexpected approach to cop-think with how Ty decides to investigate the hit-and-run that may be tied up with a death caused through terrorism.

God knows, the clues keep popping up all over, and it’s still rather amazing that a couple of amateurs did as well as they did. ‘Cause I can’t give Ty a lot of props for his detecting sense in this. Sadly, there was a touch of the had-I-known, and I’m thinking it was a bit of foreshadowing that Karen‘s kids just happen to play lacrosse and field hockey? As for that rumbling Chekhov’s gun. Gross practically had to hit Karen over the head with it.

True to form, Gross had the usual run of characters in this from the “pure-as-driven-snow” to the cowardly selfish to the “billionaires ruining it for the millionaires” types. And it takes this comment from one of them that makes me wonder what kind of Kool-Aid these boyos are drinkin’?

”You don’t judge these kinds of funds. You run them. You manage the money.”

Oh, yeah. That speech Karen gives at the end when it seems the bad guys are about to win was be-yoo-ti-full. And so very right. I just wish there had been so much more suffering for that jerk. One tip I took away from it, that has held true in past stories is to fight. Fight to the bitter end.

Too bad Charlie hadn’t scheduled the car for another day. He wouldn’t have been on that train.

That same day, a suspicious hit-and-run accident leaves a young man dead in Karen’s hometown of Greenwich, Connecticut, which brings Ty Hauck into the case when he finds a clue that connects the two seemingly unrelated events.

Karen is married to Charles Friedman, a hedge fund manager, and they have two kids: Samantha who will be attending Tufts and Alex who plays lacrosse. Tobey is their West Highland terrier; Sasha was run over last week. Rita is their housekeeper. Karen’s dad, Sid, owns a small chain of paint and remodeling stores in Atlanta. Margery is Charlie’s mom.

Lieutenant Ty “The Legend” Hauck, a running back hero in high school, had experienced the big city, working the Information Office when the Trade Towers were hit and is now head of Violent Crimes in Greenwich. The Merrily is his twenty-four-foot fishing skiff. Beth is his ex-wife who married again, Rick, a district manager in a mortgage firm. Jessica is Ty and Beth’s daughter; Elyse is a friend of Beth’s. Norah. Norah had been four years old.

The Greenwich PD
Debbie is the secretary for Violent Crimes. Detectives Freddy Muñoz (Will is his son) and Zaro, Officer Stasio, and Sergeant Dicenzio are part of the force. Steve Christofel handles bunko and fraud. Carl Fitzpatrick is chief of police.

The Norwalk PD
Detective Joe Horner is involved in the fancy car heists.

Another agency, in Stamford, is run…
…by Vito Collucci, a forensic accountant, who has worked with Ty in the past.

The Joint Inter-Agency Task Force is…
…part of the NYPD and oversees the city’s security. Lieutenant Joe Velko works on Watchdog, a state-of-the-art computer software program that monitors bits of data. His wife, Marilyn, had died on 9/11 leaving Joe with two daughters, Michelle and Bonnie.

Harbor Capitol is…
…the investment fund Charlie opened. Heather is his assistant, Sally runs the back office and is the bookkeeper, and Jonathan Lauer is the junior trader. Now he’s at Man Securities. Stevie is Lauer’s eight-year-old son; Lucy was his daughter and Kathy his wife. Gary Eddings, a bond trader at Merrill, is a friend of Lauer’s. Linda Edelstein arranged Harbor Capitol travel plans.

Saul Lennick was Charlie’s boss at Goldman Sachs and now acts as the trustee for Harbor; he’s practically a godfather to the Friedman kids. Mimi is his wife. They have a daughter in Boston with two children. Ida is Saul and Mimi’s housekeeper.

Pensacola, Florida
“Pappy” Raymond is a harbor pilot and the assistant harbormaster for the Pensacola Port Authority. Al is the ship’s mate. Pete (a harbor pilot like his dad) and Walker are Pappy’s other sons, AJ’s brothers. Ray Dubose and Mack Tyler are tug’s mates.

The Caribbean
Steve Hanson lives on his boat, the Emberglow. Neville is his Trinidadian captain with the Sea Angel. Ronald Torbor is an assistant manager at the First Caribbean Bank on Nevis; Edith is his wife. Their children include Alya, Peter, and Ezra who has Asperger’s. Paul Williams is Edith’s cousin. Mr. Carty is the senior bank manager. Mrs. Williams makes great roti. Michel Issa is in the diamond business in St. Maarten and known as a businessman who keeps his mouth shut. Marte is his wife. Juliette is their daughter with a baby, Danielle. Wilson is the cop who investigates the murder.

Dolphin Oil is based out of Tortola in the British Virgin Islands. Falcon Partners is one of those investment companies that hides ownerships.

Phil Dietz is a retired cop cold canvassing for security systems for Dark Star. Hodges is a track coach from Wilton. Lenz and Cates are part of the team. Paul Roos and Alan Gillespie are with Archer and Bey Associates in Johannesburg. Alan Weitzman is another alias. Gregory Khodoshevsky is a Russian billionaire. Pavel is his fourteen-year-old son; Michael is another son. Ludmila is his wife. The Black Bear is his schooner.

Johann Pieter Fichte is a German banker, a money trafficker, if you get right down to it. SunDog’s Web address is Oilman0716@hotmail.com

Hank Gordon is an old buddy and is the dock manager at the Indian Harbor Yacht Club. The Fairfield Diner is a cop hangout. Rollie. Mary hands out coffee at the game. Richard and Jacqueline are a French couple who live next door to Ty and do custom furniture restoration.

Paula and her husband, Rick, are good friends with Karen. Cheryl is Karen’s yoga instructor. Kyle Bregman had also been on the track team. Mal is their droning plumber. Kegg is a lawyer from Parker. Megan Walsh is with the JP Morgan Chase bank. Ian Coombs. Baltic Securities. Media Publishing distributes Mustang World.

The cover feels like it’s bleeding with that red bleeding vertically into white with a woman’s hand dangling on the back. A partial slipcover hides this with dark gray waves, a ragged white wave is at the top as The Dark Tide moves in, preparing to take them all down.

The author’s name is large in an embossed white outlined in red on the half-slip while the title is below it in the reverse, an embossed red outlined in white. Informational blurbs are in white and scattered about.

2 responses to “Book Review: The Dark Tide by Andrew Gross”