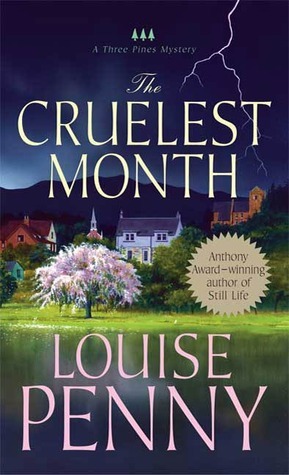 It's spring in the tiny, forgotten village; buds are on the trees and the first flowers are struggling through the newly thawed earth. But not everything is meant to return to life. . .
When some villagers decide to celebrate Easter with a seance at the Old Hadley House, they are hoping to rid the town of its evil — until one of their party dies of fright. Was this a natural death, or was the victim somehow helped along?
Brilliant, compassionate Chief Inspector Armand Gamache of the SQ (Sûreté du Québec) is called to investigate, in a case that will force him to face his own ghosts as well as those of a seemingly idyllic town where relationships are far more dangerous than they seem.

Third in the Chief Inspector Armand Gamache mystery series revolving around the inspector and a small village outside Montreal during Easter.

My Take
The village of Three Pines is as much a character in this series as the people. Whenever Penny describes this forgotten village in her opening paragraphs, I always think Brigadoon with the swirling years of time and the protection of the Canadian mountains as they conceal this tiny place. There’s the old Hadley place, too. Another character abandoned in this series. A place where evil constantly finds its way in. Just goes to show…even the sweetest places can harbor the most devious minds.

Part of what I love about Penny’s stories is her combination of warm, cozy, cottagey feel and the humor she sprinkles throughout. It makes me love the characters even more within the homey setting. The core group is planning an Easter egg hunt, and I cracked up with Gabi’s remark about chocolate and Easter egg hunts: “Great idea. Gay men offering chocolates to children.” Then there’s the irascible Ruth who has to destroy, even if she has a good point about rabbits and eggs, lol. What’s truly funny? Ruth becomes a momma…she’s so cute with Rosa and Lilium. Only it doesn’t stay cute as the truth for Ruth’s behavior comes through, killed by kindness, and I cried for all her losses.

Peter’s reaction to Denis Fortin wanting to see Clara‘s work is so real and terrifies me throughout the story. He’s so incredibly mean to his wife. He’s so successful with his own work and still he resents her being discovered? The words he uses…I simply want to rip a strip off him! Especially as we read through Clara’s fears.

I’d worry about a policeman who says: “You’re blinded … by your need to help people, to save them.”

It’s red herrings and betrayals a’plenty in this one with a sense of evil washing its hands in anticipation. I love how full and rounded Penny makes her characters. She shows us more of the anger and worries of Gamache’s team, the give-and-take amongst them, the fears they have about themselves, the others, and Gamache. Beauvoir with his crush. Lemieux with his misperceptions. Nichol with her selfish attitude. The time spent with such a minor character as Gilles is beautiful as he talks about his trees and how they speak back. His regret and come-to-Jesus moment amongst the trees when he was a lumberjack. How can Lemieux be so gullible? So blind?

Penny must be an artist or know them to understand them so well.

There’s a side story within this one about the Cree mother who refused to give up. It’s a beautiful example of how one person can affect such change.

What does it take for one person to be happy? How does one prevent jealousy from eating away at a person? Prevent them from seeing their own happiness?

The Story
It’s fun and games—some not so nice—until the séance in the old Hadley place results in one of them being frightened to death.

It’s murder, you know, and Gamache and his team are thrust into confrontation on two fronts: finding the murderer and countering a campaign aimed against the chief inspector.

The Characters
Chief Inspector Armand Gamache of the kind eyes and calm face is under fire at the Sûreté in Montreal and in the papers which are vilifying him and his children. Reine-Marie is his so very understanding wife and a librarian. Henri is Gamache’s young German shepherd. Daniel is his married son who lives in Paris with his wife, Roslyn, and infant daughter, Florence. Anne Marie is their youngest child, married to David.

Jean Guy Beauvoir is Gamache’s second-in-command with a love for fine clothes; Enid is the wife he gladly leaves with the in-laws. Agent Isabelle Lacoste is part of Gamache’s team as well; she has two children and is happy with herself. Marc Brault is Gamache’s opposite number and friend over at the Montreal Metropolitan Police with whom he entrusted his children. Superintendent Michel Brébeuf, Gamache’s supervisor, is revealing himself to be a traitor to his years-long friendship with Gamache; Catherine is his wife. Agent Robert Lemieux is the so-very-friendly and charming duty officer at the Cowansville police station in the Eastern Townships. Dr. Sharon Harris is the coroner. The bitchy, self-absorbed Agent Yvette Nichol is back! Superintendents Sylvain Francoeur, Gamache’s arch-enemy and Arnot’s best friend; Paget is the titular leader; and, Desjardins are part of the council. Ari Nikolev is Yvette’s proud, yet deceitful father.

The Core Inhabitants of Three Pines
Clara is an artist who creates collages her husband does not understand, and yet, the influential Denis Fortin is coming to see her work. Her husband, Peter Morrow, is already famous, but works so slowly on his intensely magnified paintings that they’ll never get rich. Lucy was Jane’s dog and now lives with the Morrows. Myrna Landers is a heavyset former psychologist who now runs the village bookstore, Myrna’s Livres, Neufs et Usagés. Ruth Zardo is the curmudgeonly poet, who had won a Governor General prize for her work. She’s also the volunteer fire chief! Olivier Brulé and his partner, Gabri Dubeau, own a bed & breakfast in Three Pines; Olivier sells antiques as well while Gabri is the most delicious cook. I love that Gabri occasionally gets so ticked off at Olivier for selling everything out from underfoot that he sometimes wears a price tag!

Hazel Smyth is happiest doing for others who are in distress. The angry Sophie Smyth is her daughter, visiting home from a stint at Queens University. Madeleine Favreau is an old schoolmate who’s moved in and become Hazel’s housemate. She’s also, sort of, dating Monsieur Béliveau, whose wife recently died. François Favreau is the ex-husband who still loves her. Joan Cummings is another old schoolmate.

Minor Inhabitants of Three Pines
Sarah runs a tasty Boulangerie while the widowed Monsieur Béliveau runs the general store. Odile Montmagny fancies herself a poet; her boyfriend, Gilles Sandon, is an artist in wood. Together they have a shop, La Maison Biologique, in St.-Rémy.

Madame Isadore Blavatsky is a famous Hungarian psychic, at least in Gabri’s mind. Jeanne Chauvet is a guest at the B&B, who does readings. Denis Fortin is the owner of a famous art gallery, Galerie Fortin.

The Arnot case has destroyed Gamache’s career. The Sûreté wanted to sweep it under the rug; Gamache refused.

The Cover
The cover is crackling with a lightning bolt in the night sky over the small village of Three Pines. A pink-flowering tree stands showcased in the moonlight, separate from the houses and church surrounded in greenery which are set back leaving a deep green meadow in the forefront.

The title refers to the betrayals of this Easter month, and there are so many. It is also the kindnesses that destroy, as Gamache learns in this, The Cruelest Month.