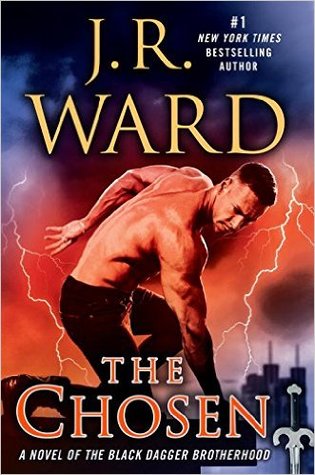 Buy on Amazon
Goodreads
Also by this author: Possession, The Shadows, The Bourbon Kings, Blood Kiss, The Beast, Blood Vow, Blood Fury, “Dearest Ivie”, The Thief, "The Rehearsal Dinner", "The Reception", Consumed, The Savior, Blood Truth, Where Winter Finds You

Fifteenth in The Black Dagger Brotherhood paranormal romance series set in Caldwell, New York, and revolving around a bad-ass band of vampire fighters and their loved ones. The primary focus is on Layla and Xcor and Qhuinn and Blay with a secondary focus on Trez’s grief (The Shadows, 13).

The prologue is a back history for Xcor, specifically the circumstances of his birth. Throughout the rest of the story, Ward intersperses flashbacks that reveal his childhood and how he was taken in, literally, by Bloodletter. And that first page makes me want to lash out in rage!

With all the drama, tension, and anger flowing in The Chosen, it’s not surprising that Ward uses third-person multiple point-of-view, as the primary protagonists in this have their own scenes with us in their heads, and you view the drama from their perspectives.

And it is a story of rage and words that should never be said. Angry words that a number of characters are throwing around. Of betrayals and treasonous actions; the lengths and the destruction wrought by out-of-control anger. It’s also a tale of the healing power of forgiveness.

A teeny tease comes out about Throe’s background and why he was thrown out of the family. I can’t decide if he’s a sociopath or a psychopath. I guess time will tell.

I did love the reaction of the women in The Chosen…go, girls!!

Lassiter is definitely evolving. He was pretty “handy” in The Beast, 14, and his abilities are underscored in The Chosen. As for Blay, I do not blame him one bit for his reaction to Qhuinn’s cruel words, for truth does come out in anger. As for Qhuinn’s hypocrisy, despising his innocent little daughter…! Nor is his the only hypocrisy when you discover what V is up to. And that’s a betrayal that makes absolutely no sense. V is an intelligent man. Why wouldn’t he simply speak to Doc Jane?

That last battle at the end? I dunno. Too easy. I do wonder if Ward is signaling the end of the BDB.

Tohr is the chosen who will execute the treasonous Xcor. It’s his right. And the knowledge of his coming execution is weighing Layla down with grief and guilt, so much so that she blurts out the truth and has her life, her reasons for living, almost destroyed.

Xcor, however, has accepted his fate with his only regret the loss of a sacred female who was never his: the Chosen Layla. It’s a fate Layla fears and she gathers the courage to stand up against the only family she has for the only man she will ever love.

Layla, a.k.a., The Chosen, was set free from the task for which she was bred. A new mother, she’s struggling to find her own identity. The twins are Rhampage “Rhamp” and Lyric, a son and daughter. The bi-color-eyed Qhuinn, the first Brother inducted on merit and a rejected bad-seed son of a Founding Family, is the father of her twins, but not her beloved. He’s mated to Blaylock “Blay”, son of Rocke (Lover at Last, 11).

Xcor is the illiterate leader of the Band of Bastards. An outlaw convicted for events in The King, 12, and he’s been in love with Layla for the past year-and-a-half. Throe, a disgraced glymera and son of Throe, had been his second-in-command, but has betrayed them for his own goals. Other Bastards include Zypher, Balthazar, Syphon, and Syn.

The Black Dagger Brotherhood is…
…an elite guard of gorgeous, vicious, extremely lethal vampires who always dress in black leather and never seem to leave their bedrooms without at least 40 pounds of weaponry. They’re also the most gentle and loving of men. An interesting dichotomy. Their purpose is to guard the king and their people. The Tomb, the Brotherhood’s sanctum sanctorum, is a hidden site for inductions, meetings, ceremonies…

Wrath is the Blind King. George is his faithful service dog. Beth is his beloved shellan and the Queen (Dark Lover, 1). Tohr is mated to Autumn (Lover Reborn, 10); his first mate, Wellsie, had been murdered (Lover Awakened, 3). Vishous “V”, their tech tsar, is mated to Doc Jane, a ghost (Lover Unbound, 5). Payne, a former Chosen, is V’s sister (their mother was the Scribe Virgin) is mated to Dr. Manny Manello (Lover Unleashed, 9). Manny and Doc Jane are the primary medical team for the Brothers. Butch O’Neal, a former homicide detective and the son of the race’s Creator, is The Dhestroyer with a fabulous wardrobe who is mated to Marissa (Lover Revealed, 4). The two couples live together in the Pit, a guest house within the estate. Phury is the Primale who broke the mold. He’s mated to Cormia (Lover Enshrined, 6), and they live up at the Great Camp. Zsadist “Z” is Phury’s twin and mated to Bella (Lover Awakened). Z and Bella have a little girl, Nalla. Rhage, a.k.a., Hollywood, is cursed into turning into a dragon. He’s mated to Mary (Lover Eternal, 2, and The Beast who has been granted long-life, and they have an adopted daughter, Bitty (The Beast, and Blood Vow, 14.5). They’re practically invisible in this. Xhex, half-vampire/half-symphath assassin, is mated to John Matthew, a mute Brother who is also Beth’s brother (Lover Eternal, 2, and Lover Mine, 8). Saxton is Qhuinn’s cousin, a former lover of Blay’s, the royal lawyer, and an expert on the Old Laws.

Trez and iAm Latimer are Shadows and twin brothers. Selena had been Trez’s mate before she went unto the Fade a few months ago (The Shadows). Trez operates the shAdoWs, a nightclub in Caldwell. George “Geo” is a hot bartender. His brother, iAm, is mated to Catra, the queen of the Shadows, a.k.a., the s’Hisbe (The Shadows). He runs Salvatore’s Restaurant, a well-respected Italian place that its owner, Sal III, lost to Rehv over gambling debts. Vinnie is his meat supplier; Mrs. Giuffrida is Vinnie’s satisfied mom. Emile is the manager; Enzo Angelini is the front house manager. Therese “Tres”, a female, has fled her home in Michigan and is looking for work.

Lassiter is a Fallen Angel inflicted upon the Brothers. He’s got a crazy, and I mean crazy sense of humor. Fritz is the head doggen, think butler. Assail had been a drug user and dealer who has chosen to quit. It’s not going well. Luchas is Qhuinn’s handicapped brother whom Doc Jane has helped.

Rehv, a symphath and king of the sin-eaters, is mated to Ehlena (Lover Avenged, 7). Blay’s parents are Rocke, an accountant, and Lyric; they love being grandparents to Rhamp and Lyric. Corra is Throe’s current married lover. Her husband is an 800-year-old vampire.

Damn Stoker is the pseudonym for an online blogger digging into the truth of the existence of vampires. Jo Early (The Beast) works for the Caldwell Courier Journal.

The Lessening Society is…
…an organization of slayers, lessers, created by the Omega to destroy the vampire race.

The Fade is the race’s idea of death. The Scribe Virgin had been the race’s goddess based in the Sanctuary on an alternate plane; now, she’s gone (The Beast). An ehros is a Chosen who has been trained in the sexual arts. The Primale was a Brother chosen as the progenitor to breed with all the Chosen in the birth of new Brothers. Amalya is the Directrix of Sanctuary, I think.

The cover is a blast…of lightning all around Xcor’s half-naked figure with his close-cropped hair, assuming a runner’s starting position. The background is a hazy dark skyline at the base that lightens up into a bright red and gradually darkens on its way to the top. The author’s name is at the top in a large embossed metallic gold while the title is at the bottom in an embossed lighter red outlined in white (or silver??). The series information is at the bottom in white with Ward’s signature blade, the hilt anyway, on the right.

As a title, The Chosen has so many obvious applications: Layla, Xcor who is her chosen, as well as The Chosen of his Band of Bastards.