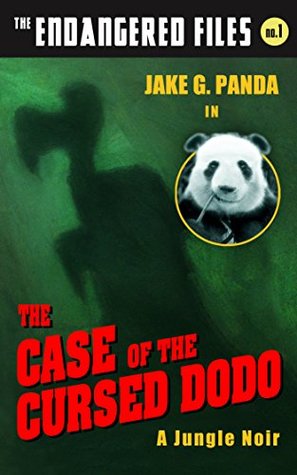 
First in The Endangered Files jungle noir mystery series for middle-grade readers with anthropomorphized animals as the characters. I did receive a copy from the author.

This is way too funny. I enjoyed Panda’s take on this book as a movie, and he’s filled it with all sorts of punny bits such as “Wildlife’s Last Resort”. Yep, he’s taking on those old clichés and making them work *more laughter*

Oh, lord, imagining Jake showing the Professor’s picture around the bazaar was another crack-up. I did like that lunkhead joke. As for that typewriter… It never stood a chance.

I did have a few quibbles. It was difficult to figure out Panda’s location (world-wise) when he was out on the trail. And I didn’t know there was a train to Marrakech nor all that greenery around the resort area. I’d also like to know why the hotel needs artifacts??

The obligatory whine over, as you read, you’ll hear the voice of those 1940s noir mysteries. I can almost hear Humphrey Bogart speaking! Okay, okay, so it’s Jake’s perspective using a first-person protagonist point-of-view, but I could swear it was Bogart! The action is still as noir-ish as you’d like, although it does include a deus ex machina with that last-minute, sad save at the end.

Panda does rescue the very end with all that new help at the hotel. I gotta read the next installment, if only to see how the staff works out, lol.

If you’re looking for trouble, you’ve found it. The name’s Jake G. Panda, and trouble seems to follow me wherever I go. I work in the protection racket at a flophouse for endangered critters called the Last Resort. I’m the hotel snoop. The resident fuzz. It’s my job to keep these guests safe and outta harm’s way.

Only. I didn’t plan on a wild and woolly mystery involving a lost suitcase, a green bird, and a bunch of double-crossing animals.

Jake G. Panda is a hardboiled detective, a panda in a tie who could substitute for Sam Spade. Eddie, a woolly mountain tapir, likes his bow ties and is Jake’s associate.

The Last Resort is…
…a flophouse for animals in trouble. Rose, an El Hierro giant lizard in heavy make-up, works at The Bamboo Room, a greasy-spoon diner. Timmy is a Round Island day gecko selling newspapers in the lobby. Gloria is a Mexican grizzly who works the front desk. Sam, a long-nosed proboscis monkey, mans the elevator. Ernie is an Asian elephant who is the hotel driver on a bicycle rickshaw. The Watering Hole is the lounge where Stretch, an orangutan, is the bartender. Daisy Condor is a California condor who sings. And has a history with Jake.

The Professor, a.k.a., Harry, is an hispid hare, a rare bunny from the Himalayas, who tracks down endangered artifacts for the hotel.

Mr. G, the resident tough guy, is a mountain gorilla who has chimps doin’ his dirty work. Knuckles is a Siamese crocodile. Smith is a “wild African dog”. Turns out his name is short for Locksmith. The Colonel, Alfred, is an old dodo. Margaret had been his wife.

Tortoise Air is…
…the local airline run by Tex, an old Galapagos tortoise. He’s also the pilot. Careful of those landings though, lol.

The Critter Bazaar
Madame Baloni, a wild yak, is a fortune teller. Raoul is a one-eyed cave salamander with information. Bedouin Joe, a large Bimini boa, has a curio shop. The shrew is his much-abused underling. Hump is a Bactrian camel who’ll act as a guide; he’ll sell out anybody. Crutch is an ostrich who is true to his species.

The Midnight Oasis is a bar.

The Poachers
Karl is the leader of a gang of Norwegian rats. Vilhelm is his second-in-command, Lars is the muscle, and Hans and Olaf are fodder. Roy is the undercover bloodhound.

Doc is a greater bilby. Lou is a punch-drunk Tibetan snowcock. Stan, the resident wisecracker, is a pygmy hog who was once part of a comedy duo with Livingston.

The Endangered Underground is…
…the wildlife resistance, “a ragtag band of critters fighting back against the human intruders, liberating the oppressed, and taking back their homes” led by Diego “the Desert Rascal” who is a Mexican prairie dog while Lieutenant Nina is a Tehuantepec jackrabbit.

The Creature Comfort Express is…
…a train.

Extinction City is…
…a boomtown gone bust, as the animals who had lived there were the last of their kind.

The cover somehow combines sinister with funny and a definite sense of noir with its textured bright green background surrounded with black, from the band across the top with the series information in white to the looming shadow of the dodo filling most of the background to the left of the yellow-bordered circle inset of a panda with…something in his mouth. I wanna say pipe, ‘cause Jake here makes me think of Sherlock Holmes There’s more black at the base of the cover, radiating into the green. The author’s name is in a bright yellow (as is the genre info at the bottom) while the title is in a bright red at the bottom left slanted upwards from left to right.

The title is too accurate, for it is indeed The Case of the Cursed Dodo.

4 responses to “Book Review: The Case of the Cursed Dodo by Jake G. Panda”