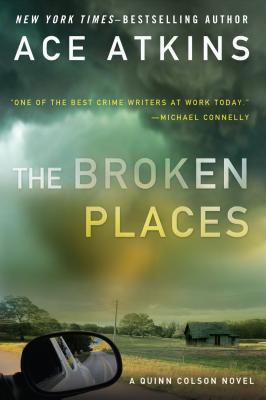 The Broken Places by Ace Atkins
Genres: Thriller
on May 30, 2013
Pages: 358
Format: Hardcover
Source: the library

Buy on Amazon
Goodreads
Also by this author: The Ranger, The Lost Ones, The Forsaken

Third in the Quinn Colson thriller series revolving around a retired Army Ranger sergeant who’s been the sheriff of Jericho, Mississippi, for over a year.

It’s a topsy-turvy tale of redemption — tempestuous, turbulent, and furious with the characters going about it in all the right ways but with such a twisty path going in directions I did and did NOT expect.

It’s all because of that Atkins. He’s a sneaky bugger, dribbling out these bits and pieces, making me wonder if Jamey’s for real or not, waiting for the ball to drop, wondering where Jamey got the money to do what he does, what Quinn is thinking with that Anna Lee, and I still wanna know how Quinn’s mom supports herself…

It is handy that Atkins is using third person global subjective point-of-view — we’re getting a look into everybody’s heads as well as those events specific to them! It’s how we get a bit more insight into why Caddy went off the rails so bad and that short reference to Jason Colson (the older)’s current life.

I sure did appreciate Atkins’ style of info dumping as well. Hoo, boy. Using the other characters to have conversations about Ophelia sure does fill us in, and it’s a heckuva lot more interesting than the boring type of dump.

More of those fun bits that bring life to a story included Quinn being besieged by his reformed sister to join her and Dixon’s church. He sure gets his digs in. As for that Boom, oh, yeah, I love that guy. He sure keeps Quinn on the straight and narrow, lol.

I surely hate that Stagg, and he does make for an excellent series antagonist. So as much as I want that scumbag taken down, I suspect we’ll have to wait for the end of the series…unless Atkins comes up with a new big bad.

In the meantime, the “story” bad guys… Well, these guys are long-term planners, only they have such short fuses. Guess all that fresh air just goes to their heads.

It’s a tale that starts with a wild escape and only gets wilder.

A year after becoming sheriff, Quinn Colson is faced with the release of an infamous murderer from prison. One who comes back to Jericho preaching redemption, and some believe him; but for the victim’s family, the only thought is revenge.

Another group who doesn’t believe him — the men in prison who stashed the loot from their last job. They’re sure he’s done them wrong, so they do the only thing they can: break out and head straight to Jericho themselves.

Colson and his deputy, Lillie, know they’ve got their work cut out for them. But they don’t count on one more unwelcome visitor: a tornado that causes havoc just as events come to a head. Communications are down, the roads are impassable — and the rule of law is just about to snap.

Retired from the Rangers when they wanted to put him behind a desk, the La Gloria Cubana-lovin’ Quinn Colson got elected sheriff. Hondo is the cattle dog Quinn inherited from his uncle Hamp, the former sheriff. Jean Colson is his goodlooking, get-along mother. Caddy Colson is Quinn’s recently redeemed little sister who’s taken up housekeeping with her biracial son, the almost-five-year-old Jason. She’s also gotten religion. Boom Kimbrough is Quinn’s oldest and best friend who came back from the war with PTSD and one arm. Now he runs the County Barn, the maintenance shed for the county vehicles. Jason Colson is Quinn’s long-gone father, a stuntman in Hollywood. Uncle Van Colson plays guitar; J.T. is the local master of auto body repair who plays bass.

Jericho County Sheriff’s Department
Chief Deputy Lillie Virgil (she used to be a star shooter for the Ole Miss rifle team) adopted Rose, an orphan Mexican child from events in The Lost Ones, 2. Mary Alice is the office administrator and runs dispatch. Deputies include Kenny, Ike McCaslin, Dave Cullison, and Watts.

Monroe County Sheriff’s Department
Cecil Locke is the sheriff and has been in law enforcement longer than Quinn has been alive.

The U.S. Marshals
Buster Wilson and Toby Sisk were close by when they got the call about the Wells Fargo truck.

Ophelia Bundren is a bit of an odd duck (and looks like Wednesday Adam), mostly because she enjoys her work as a funeral home director with the Bundren Funeral Home and as the county coroner. Eleanor Taylor is one of her, um, clients as was Tom Cat McCain‘s long-suffering wife. Adelaide was her murdered twin sister. Dustin is a witness who saw Miss Adelaide that night.

Johnny Stagg is scum who rose to the top, via prostitution and drugs. He’s the head of the county board of supervisors and has been gunning for Quinn’s job since the beginning. He owns the Rebel Truck Stop and a strip joint, the Booby Trap, where Brian is a bit short on musical history, even though he’s the deejay. Candace “Shorty” Ledbetter, Brittany, and Sandi Jo (she’s done a full year of nursing at junior college) are some of the dancers. Double Down is a Choctaw dishwasher. Leonard used to be a sheriff’s deputy; Stagg made him police chief of Jericho. Joe Ed Burney is a Jericho police officer. Bobby Pickens is a county supervisor. Stagg’s contact in Memphis, Bobby Campo, is serving time right now.

Jim runs the barbershop; he and Luther Varner had been friends with Quinn’s uncle. Luther owns the Varner Quick Mart, and Peaches helps run it. Luther’s nephew, Donnie, is to make a deal after The Lost Ones. Dr Luke Stevens had been friends with Quinn in high school…and married Quinn’s girl, Anna Lee Amsden. (They had a baby girl.) Stevens recently took a job in Memphis. Miss Rebecca is the pastor at Calvary Methodist. Mrs King over on County Road 381 reports some stolen turnips. April is a hairdresser at Mane Attraction. Fred Black is a local welder whose family has had some trouble. Mr Horace used to run a juke joint in a single-wide trailer. Willie Tucker is a caretaker for former Senator Vardaman‘s hunting cabin. Betty Jo Mize, who runs the weekly Tibbehah Monitor, has a storm shelter. Wade is Betty Jo’s son and the Jericho Chamber of Commerce president. Ken Senior is Kenny’s dad. Bennett Dickey has the custom cabinet shop.

Jamey Dixon was newly released from prison for murder. He’s a newly ordained minister who starts up The River where you can worship and not have to tell where you’ve been. Randy has a Ditch Witch.

Sugar Ditch is the really poor side of town.

Highsmith is a cook at a mom-and-pop restaurant. Mary is the waitress from the Fillin’ Station diner whom Hamp had been seeing.

The cover is a mix of sea greens from the stormy greens of the roiling sky with the soft focus on a funnel of golden winds hovering over a deserted landscape of woods in the distance and a shanty in the middle ground. We’re getting a look back down a lonely road in the rear side mirror in the lower left by the series info in white. Back at the top of the cover is an info blurb about the author whose name is immediately below that in an embossed white. Below that is a testimonial in a greenish-yellow. Right through the middle is the title, embossed and using a directional gradient of white to gray to the same greenish-yellow. For all its gloominess, it’s quite restful, lol.

The title fits two ways, with The Broken Places existing within many of the characters and in the town at the end. 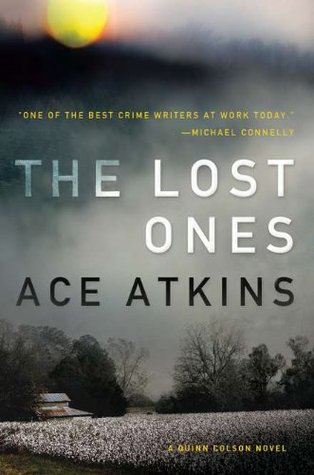 Book Review: The Lost Ones by Ace Atkins 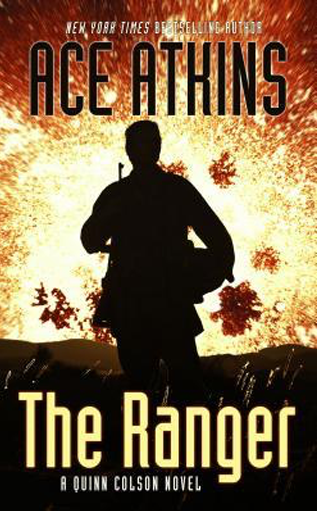 One response to “Book Review: The Broken Places by Ace Atkins”