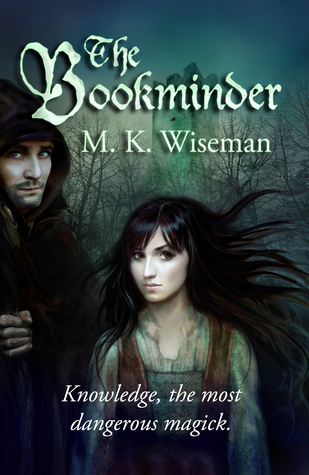 
First in The Bookminder Trilogy young adult fantasy series set in 1679 and revolving around Liara, a persecuted young girl who has no idea she can do magic.

The Bookminder is a interesting story, and I’m curious as to where Wiseman goes next with it. Especially since she’s raised all these questions! I want answers, even though I greatly disliked Liara as a character, which is rather unfair as Wiseman portrays her as a self-absorbed teenager. Which is exactly what Liara is. It’s probably a good thing I don’t have children! And probably a good book for unruly young teens; one can hope they might recognize themselves…

She steals and then doesn’t understand why people suspect her of it, never recognizing that stealing something, no matter her reasons, is bad. She always thinks she can get away with anything as long as she makes her false promises. She never thinks she should be punished for what she does. She lies, and then wonders why no one believes her. Hmmm, a form of crying wolf?

“…you limit yourself when you only see what everyone else says of you. And when you look only at yourself, you discount the pain of others.”

Nagarath cracks me up with his naiveté. He’s so busy patting himself on the back for how well he’s handling Liara…*eye roll*… Between them, it’s a contrast of white magic and black.

There’s more naiveté in the writing. It’s too obvious for me, but maybe this appeals more to the fourteen-year-old readers. Still, I can’t help but reflect on J.K. Rowling and John Flanagan’s writing, also for young adults, and more appealing to my own intellect. Eek, that sounds so snobby?!?

Part of their problem is all those assumptions we learn of through third-person multiple point-of-view: from Nagarath’s perspective, we learn that he assumes she’s doing well, yet form Liara’s perspective, she assumes Nagarath can read her mind.

I found myself surprised by Liara being in charge of the library. Wiseman puts such equal emphasis on all the cleaning and organizing Liara is doing around the “house” that the book minding being so important escaped me. I dunno. Maybe my mind was wandering?

She gets all these signals from Anisthe, but believes every word he says?? Probably because what he “says” is what she wants to hear. Anisthe does have his uses, as he does teach Liara much about the approach to magic.

That a sixteen-year-old would know about cataloguing? Although I do love the catalogue she comes up with!

In the end, I suspect my real problem with The Bookminder is Liara’s teen perspective. She’s such a snotty, self-absorbed know-it-all who wants everything now but isn’t interested in working at it!

Banished from the village for the use of witchcraft, Liara should be grateful she wasn’t executed. And when she is taken under a local mage’s wing, she’s excited at the thought of being taught to use her magick despite Nagarath stating he would not.

Until she discovers Nagarath means it.

The sixteen-year-old Liara has “the mind of a mage and the fingers of a thief” with a mage for a father and Ana her mother??

Nagarath is the Wizard of Parentino (originally from Naples, Italy) who lives on the other end of the valley with an interest in natural magics. He had been apprenticed to the French Archmage Cromen when he was eight. His library includes Archmage Loothemere’s Chronicles of an Accidental War Mage, Tales from the Battlefield.

The village of Dvigrad is…
…situated in the Limska Draga valley where magic was outlawed twenty years ago. Father George Phenlick rules the village and is a delegate from the Holy See and an official representative of the doge of Venice; he has had custody of Liara for the past ten years. St. Sophia is Father Phenlick’s church. Krešimir is the woodsman’s son and her only friend. Old Woman Zarije Babić is a nasty, hard-nosed gossip. Ðerkan is Zarije’s son. The Venetian guard provide protection. Piotr is an apothecary who makes deliveries to Nagarath.

The city of Vrsar
Anisthe is a war mage and old schoolmate of Nagarath’s.

The Uskok used to raid the valley.

The cover is dark in its blues. A ghostly blue tower looms up behind a thicket of bare branched trees in a deep turquoise blue sky with the book’s title in a gothic font and the author’s name below it in a serif. Both are in white as is the epigraph, which sums it all up. A hooded, blue-eyed Nagarath stands to the side with the dark-haired Liara slightly in front of him, a hint of tension and wariness in her pose, dressed in a filmy open-necked shirt and a jumper with an embroidered insert.

The title is who Liara becomes, The Bookminder.

2 responses to “Book Review: The Bookminder by M.K. Wiseman”